How can you stop your missile locking onto a friendly target?

In the modern day we have advanced planes, and advanced missile systems, however, how can you stop your missile firing at a friendly aircraft?

In planes like the F22 Raptor you can turn on sight lock, which is when you look at a plane through your helmet, the computer registers that there is a plane there, and it locks onto the plane with a missile.

First off, very rarely will you shoot at an unidentified aircraft. Most engagements require a visual ID, or a hostile action, prior to engagement. However, you will also program your aircraft with specific ROE logic that will indicate that certain aircraft are friendly, as identified by IFF transponders, Link 16, etc.

You can still lock up friendly aircraft, and we frequently do to facilitate rendezvous with friendly aircraft and to clear ourselves from traffic, but if your master switch goes to ARM and you have a friendly locked up, there's a good chance you won't be flying again for awhile, if ever.

When we lock up an aircraft, 99% of the time, it does not indicate an intention to shoot. By using our radar and "locking up" a target we get target aircraft altitude, speed, range, target aspect, heading, $Vc$, etc, all useful things that come in handy for routine events.

The question would the missile fire at the friendly aircraft implies the missile is making the decision to fire autonomously, but this was not the case in the F-16 as recently as 10 years ago. Most US fighter aircraft (and probably fighter aircraft of other countries) give a great deal of control of the missile to the pilot. The idea behind this is autonomous systems sometimes behave in unintended ways, and a missile shot is just too important not to be directly controlled by the pilot during at least the initial phases, such as during the decision to fire.

After the decision to fire is made and the missile leaves the firing aircraft, there are autonomous systems which eventually take over (sometimes immediately). However, the sky is large, and planes are small. The likelihood that a friendly aircraft would accidentally become the new target after an enemy was originally targeted is very low. Sometimes concern for such as missile lock transfer is a consideration for close-range shots. However, the vast majority of missile shots in a modern air battle engagement occur in situations where the aircraft are separated by large distances. So let's talk about those shots occurring far away, called BVR shots, or Beyond Visual Range missile shots. Read more about BVR here.

The decision to employ a missile by shooting beyond visual range is analogous to the decision of a jury to convict someone in court - except the decision is made by perhaps one or two people (pilot and/or weapons officer) in just a few seconds using some rules of engagement. The court analogy works because the decision really is a judgement call, and there are many pieces of evidence to weigh in the decision.

Technology is a pilot's best friend when making this decision. IFF is probably considered the golden standard for shooting a hostile aircraft, however not all fighters have IFF interrogation capability on board. Even fighters with IFF interrogation capability may rely on other information as well. Is the firing aircraft on one side of a border or demarcation line / political state border while the potentially hostile aircraft is on the other line, perhaps inside another nation's borders? So location can help. However, during a fight where aircraft are mixed together, location becomes less helpful. There are other technological means for determining that an aircraft is hostile, but virtually all of those means are US state secrets and therefore cannot be discussed on StackExchange (unfortunately). Let's focus on IFF since IFF is the most useful tool, and the basic functionality of IFF is not a secret.

Every friendly aircraft is programmed before flight with a secret cryptographic code prior to takeoff. The pilot is not involved in this programming. Instead, someone from the maintenance unit goes around to all the aircraft perhaps an hour or two prior to takeoff and loads the secret code into the jet's IFF computer system. When the pilot shows up, the IFF code is set and ready to go. Part of the pre-flight check in a fighter aircraft is to check the IFF to make sure the code is loaded properly. If that sounds cool, it's because it is cool. Civilian pilots don't have a step in their pre-flight checklist to make sure a cryptographic key is loaded correctly to prevent them from getting shot down.

The cryptographic system involving the IFF is analogous to a digital certificate used in internet communication. How do you know if Amazon.com is really Amazon.com and not some spoof? How do you know you are actually talking with your bank online and not some impostor? Your browser uses cryptography to interrogate the server at Amazon.com, and if Amazon didn't use a valid key to encrypt its messages, then your browser will tell you it can't verify Amazon is authentic. There are two parts to this system: the interrogator and the responder. The responder in the IFF system is called a Transponder in the civilian world, because it "transmits" a "response". The military just calls it an IFF because the military loves acronyms. As mentioned before, not all fighter aicraft have IFF interogators. However, every aircraft in the battle space has an IFF responder.

could that potentially be used against you in modern day aerial warfare?

Could defeating the IFF system be used against you? If I had knowledge of such a thing occurring, then I certainly could not discuss it here. I will respond to this hypothetical question with a question: Could attacking and exploiting any cryptographic security system cause problems for the users who depend upon that system to make decisions? I'll leave that up to your imagination.

This abstract discussion of some of the technology behind modern rules of engagement for fighter aircraft can be dry. So I'll end my answer with a photo of the button an F-16 pilot pushes to fire the missile (it's not the trigger - the trigger fires the gun). Maybe off topic, but there is research indicating people remember better when learning with pictures. 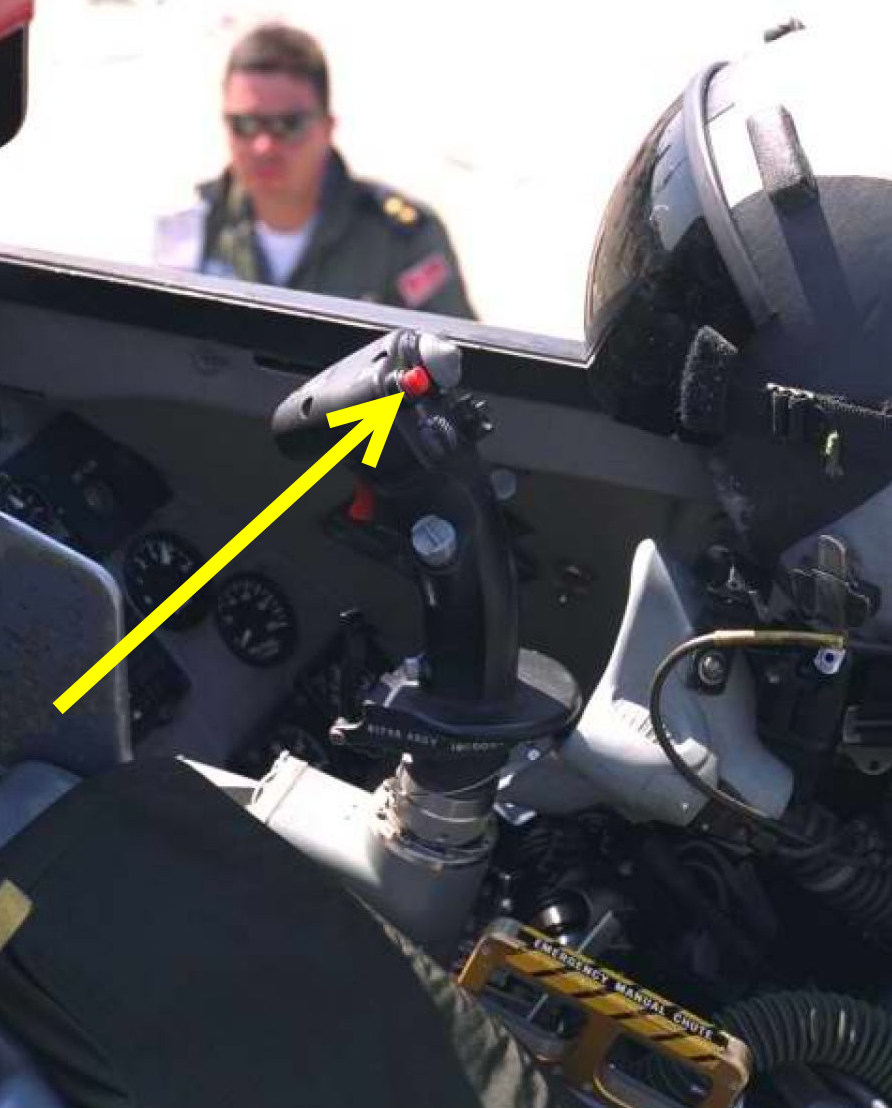 It depends on the missile and the shooting aircraft, but the short answer is, missiles are actually pretty dumb.

If you're using sight lock off your helmet cuing system, it's likely you're using a short-range IR missile like a Sidewinder, ASRAAM or AA-11. While improvements have been made, they're still spoofable, so it's actually fairly likely that if another aircraft crossed the line of sight between you and the bandit, the missile would go off-track. Whether it would really "lock" onto the other aircraft is debatable; right up until you fire, your aircraft is feeding information into the seeker head of the missile to point it at the correct target, so the missile will usually leave the rail with a target in its seeker, and anything else passing through the seeker's field of vision will be moving relatively fast through the seeker's field, so unless it "blinds" the seeker head completely it's unlikely the missile will track the new target, though it may be unable to find its intended target again after an event like this.

At BVR distances, as Rhino Driver states, getting a reliable lock on an aircraft isn't as hard as figuring out whether that aircraft is friend or foe. At these ranges, radar missiles are used which require the aircraft to have a radar lock on the target (though "lock-on after launch" capability is available for many of these missiles), providing very specific information about the target's range, heading, speed and, given sufficient radar returns for the FCC to match the signature, even the type of aircraft (at just outside visual range, modern radar can be good enough to nail down make and model). However, confirming a target is hostile requires more than that (the US-allied Malaysian Air Force, for instance, flies Russian-supplied Su-30MKMs, while the Iranian Air Force technically has a few F-14s left in service from before the Embassy takeover).

To do that, NATO aircraft (and most other forces around the world by now) have IFF transponders; A radar lock (or even a scan) of sufficient strength will produce a return including a coded response; said code can be varied to prevent use of the same code by an enemy force. It's not dissimilar from civilian transponders, though the needs of civilian ATC and the military differ.

32
Why don't combat aircraft have rear-facing weapons?
6
What trade-offs are being made in the design of the planform alignment of stealth aircraft?
24
How do aircraft differentiate between missile locks?
1
Are well-known IR AAMs 'compatible' with aircraft from other countries?
1
What procedures are used for midair refueling without air supremacy?
7
Why is this missile positioned in this odd position? How can it be launched correctly?
1
Which 2-seat 4th generation fighter/engine/configuration (de-militarized) would the best supersonic long-range civilian private transport?
3
Why aren't quadjets required to remain controllable after a sudden, simultaneous failure of two engines on one side?
1
How can you fly your own military jet in terms of altitude and acrobatics?
4
How can a supersonic cruise missile be intercepted?