How is fuel stored in a tanker aircraft? [duplicate]

How is fuel stored in a tanker aircraft? What arrangements are made to make the aircraft liquid tight?

aircraft-design refueling
Share
Improve this question
asked May 26 '15 at 16:04

You might be surprised to learn that most refueling tankers hold a relatively small percentage of their total fuselage volume in fuel. The reason why is simple; a plane stuffed to the gills with fuel would be so grossly overloaded it wouldn't make it off the runway. Tankers, therefore, can double as medium transports with little modification, as they have a sizable upper deck which is more or less empty space when serving as a tanker, but which can ferry troops, light vehicles or other materiel from Stateside bases to various theaters (a dedicated heavy transport like the C-5 or C-17 would be used for transporting large units or for specialized troop transport like airbornes).

Here's the layout of the KC-135 Stratotanker: 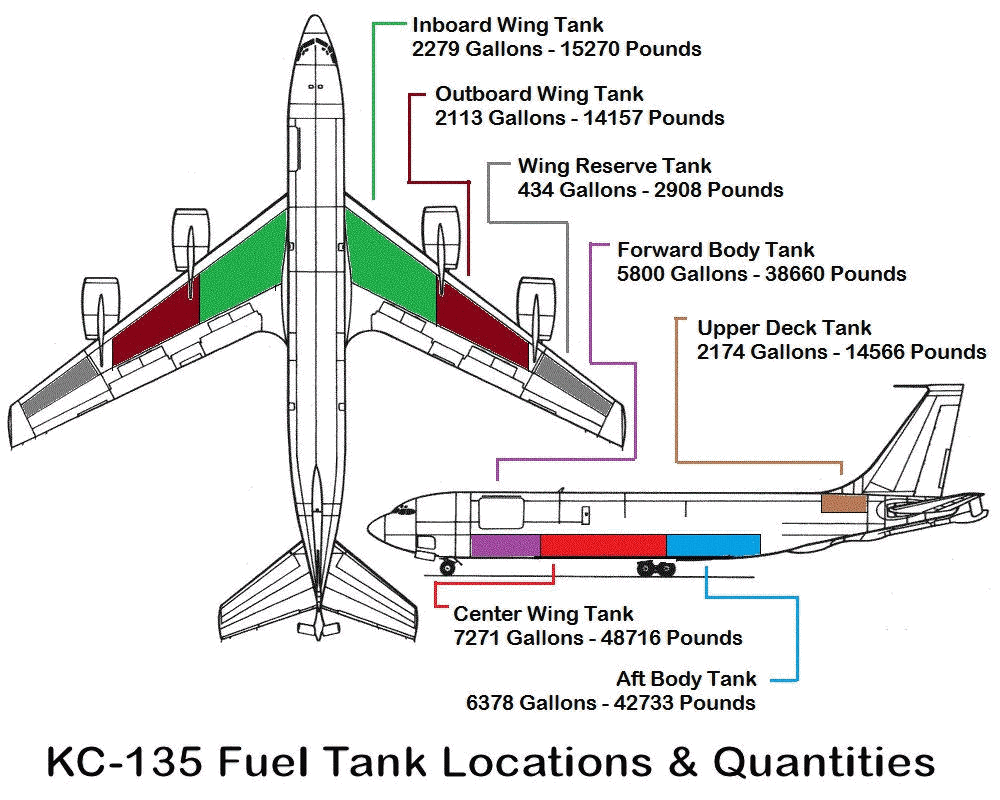 To my knowledge, all of this fuel is available both to power the plane and to refuel other aircraft, however the plane would likely draw primarily from the wing tanks for flight, as this is the "standard" configuration for the 707 the KC-135 is built on. Transport of the fuel from these tanks to the refueling systems would be accomplished with an integrated pump and pipe system that could move fuel from anywhere to anywhere.

The bulk of the fuel load, as you can see, is contained in four "body tanks" totaling over 144,000 pounds of fuel. For comparison, the F-15E strike fighter can carry a maximum, with CFTs and 3 droptanks, of just 35,550 pounds.

These tanks are lined with plastic bladders, which contain the fuel (so the entire fuselage doesn't have to be leak-proof which is much more difficult and expensive to ensure) and also allows the bladder to collapse as the fuel inside it is depleted, reducing the volume of air in direct contact with the fuel, thus reducing the vapor hazard. AFAIK the wing tanks do not have these bladders, but they're much smaller spaces overall and more easily accessed.

Separating the fuel into multiple tanks has several advantages:

Not the answer you're looking for? Browse other questions tagged aircraft-design refueling or ask your own question.

14
Do tanker aircraft distribute their own fuel?
18
Is air to air refuelling possible at "cruising altitude"?
1
Why don’t flying-boom tankers have collapsible/frangible/breakaway refuelling booms?

14
Do tanker aircraft distribute their own fuel?
9
Could the Airbus A350 be converted into the role of air tanker / be used for aerial refuelling?
11
Are engines fed differently in reduced gravity aircraft?
32
Why do aircraft use hydraulics instead of pneumatics?
23
What does the term "tanker" mean when used in regards to a passenger airliner?
14
How is fuel stored and routed on a trijet with one engine at the tail?
65
How are brakes cooled on heavy aircraft?
8
How do large airport refuelling systems work?
9
How do you know which fuel an aircraft uses?
1
What is the structural impact on the wing if no fuel is stored in the wings and just in the fuselage?