Do two of the same model of aircraft feel different to fly?

How does it feel when you change from an aircraft to another but of the same model?

Sometimes when you change a car and drive another one of exactly the same model you do feel differences due to various factors like wear and tear, mileage, different service schedules etc.

Does this apply also to aircraft or are they exactly the same?

In larger aircraft being flown by airlines that buy their airplanes from the carriers that originally bought them from the manufacturers, this can be a real problem. For example, Boeing used to allow considerable customization of 747 cockpits. For example, the forward cockpit overhead panel of 747-100 and -200 aircraft made for TWA had the switches reversed from all other purchasing airlines. The panel was at an angle, neither vertical nor horizontal. TWA treated it as a logically horizontal panel in that if you wanted a switch on, you moved it forward. All other airlines treated it as a logically vertical panel in that if you wanted a switch on, you moved it up. Thus, from the pilot's point of view, to turn on a switch on a TWA airplane, you moved the switch in the reverse direction of the other airplanes. Things got especially bad when switches from, say, an ex-Pan Am airplane were put in an ex-TWA airplane. Towards the end of my career (retired 1999), if I was in an ex-TWA airplane, I always looked directly at an overhead panel switch before throwing it. The differences section of the QRH (Quick Reference Handbook) of both 747 carriers I flew for was lengthy.

As I remember, the FAA finally stepped in and required Boeing to offer less cockpit customization.

This applies to aircraft just as well as it does to cars.

There are little differences between aircraft from the moment they come of the production line, however these are barely observable. Over time the differences become larger.

For example, jet engine performance slowly deteriorates until the next overhaul, leading to increased fuel consumption. Another source of differences is permanent deformation of the aircraft due to extreme loads. A well known example of this is the B747 of China Airlines flight 006 that had a permanently bent wing.

In airlines flight crew sometimes know that specific airframes have specific characteristics like difficult lateral trim. The flight operations department will observe differences in fuel consumption between airframes of the same model. That can be a reason not to deploy a specific aircraft on long routes.

In addition to the wear and tear like causes there are design difference as well between airframes of the same model. This is described well by Terry. A captain once told me she almost aborted an approach in IMC when the radar altimeter did not come up on final. It turned out the RAD ALT display was at a different position on the screen in this particular aircraft. Their fleet had several second hand aircraft with slight cockpit differences which caused confusion all the time.

The biggest differences that you will notice is that, especially on older models, the panel in the cockpit is not standardized and the avionics can vary wildly in both location and operation. As an example, take a look at these two 172 panels: 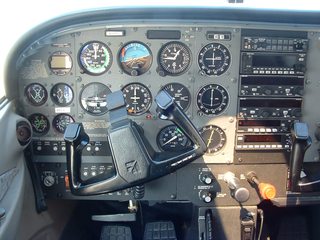 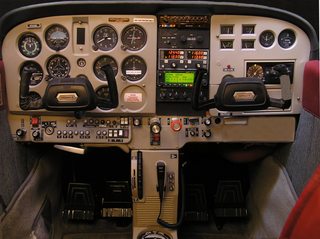 Lighting is another thing that can vary from just barely passable to sleek modern solutions that allow you to see everything easily.

You should definetely take some time with any new airplane on the ground and learn where everything is before you take it up for an actual flight.

Aside from these differences, as others have pointed out, you may notice some small performance differences depending on the total time on the engine, etc. These usually aren't that big of a difference as long as they are properly maintained.

A lot of this depends on what you mean by "the same model" - there is a lot more variation between aircraft than there is between cars, and a lot more that the pilot can customize. While every Ford Mustang you get in will be relatively similar even if you're going from mid-1960s to early 2000s models you could get in two planes that came off the assembly line right after each other yet seem completely different depending on what their owners have done to the avionics and airframe over the years.

On top of the avionics and panel layout and possible engine performance variation every aircraft is different: for the most part they're hand-assembled (even airliners to some extent) so there's variation there, and planes last a long time so each one has aged differently.
One airframe may have been in accidents and had major repairs that weren't quite to spec, another may have rigging issues (I flew a trainer that required left rudder in a right turn to remain coordinated), so you have to develop a feel for each plane you fly.

As another example of variation between planes consider that both Cessna and Piper have produced very long-lived "models": Cessna's 172 and Piper's Cherokee family (which I've picked because both are still in production today).

By one measure these are the same "model" (It's a Cessna 172, or a Piper PA28), and they'll fly largely the same as any other plane of the same type.
By another measure there are many different models in each family.

Sometimes these differences won't matter much to the pilot - the difference in air vent location in the Cherokees doesn't really affect your flying. Other times it's a difference you need to be aware of, like whether your flap controls are a switch on the panel or a lever on the floor in the Cessna, or whether you reach up or down for trim in the Cherokee.

The Swiss Air Force flew Hawker Hunters for three decades. Soon the pilots noticed that spin characteristics differed between individual aircraft. One would only spin in one direction, one would not get into a spin at all, and another would spin well left and right. The British never bothered to look deeper into this, but to the Swiss this was unacceptable.

Finally they found out that manufacturing tolerances made the nose gear doors close differently. On some aircraft, the left door would stick out a little more, on some it was the right door. Also the gap size was not identical between aircraft, and that determined the spin characteristics. Of course, soon all Swiss Hunters would spin identically.

I also remember that one Luftwaffe pilot told me that they would test fly their new Junkers 88s upon receiving them from the factory and found speed differences of maybe 20 km/h between individual aircraft from the same production batch. Then they proceeded to polish the normally matte paint of the fastest ones to have a super-fast plane for special missions.

Manufacturing tolerances might be small, but in some cases they can add up to produce noticeably different outcomes. Computerized and automated processes have drastically reduced those differences lately, however.

Engine performance and control rigging are probably two of the more obvious ways this is noticeable.

In aircraft with cable or pushrod controls, the system can develop slack and create a null zone where moving the controls does nothing.

As far as engines go, every engine wears differently. Some get crappy field overhauls and never really produce their original power again. Others are nearing end of life and have low compression in one or more cylinders.

Unless you're flying aircraft from an exceptionally well maintained fleet that distributes the flight hours fairly evenly, moving between models will almost always highlight a difference or two.

14
How do the Tiger Moth's anti-spin strakes work?
11
Are there any aircraft that come with interchangeable flightdecks?
3
Can different airliners of the same type feel different to a pilot?

9
Which aircraft endure the highest Max Q's (aerodynamic pressure)?
22
Would a roll cage plus a safety harness make a small GA aircraft accident more survivable?
7
How does a self-centering rudder affect left-turning tendency?
11
What are the physical laws for upscaling an RC model to 1:1?
9
How do the uninterrupted and interrupted flaps compare?
10
Can I model propellers used in electric aircraft the same way as I model RC quadcopter drones?
8
Do some flying techniques wear aircraft out quicker than others?
5
Is the compressibility of air the reason high aspect ratio wings are more effecient
28
Is it true that different variants of the same model aircraft don't require pilot retraining?