Can passenger distribution cause a parked airliner to tip?

This question on Travel.SE recounts a situation where a passenger, about to disembark from a commercial airline flight, was asked by a flight attendant to wait for other passengers to "catch up".

This answer suggests that if too many passengers were to disembark from the front, while passengers at the back remained at the back, the plane might tip backward; and that the flight attendant was acting to avoid this possibility.

Is this really a risk on modern airliners, or even regional jets or turboprops? (The aircraft in the question at hand was a 737.) Are flight attendants trained to redirect or hold passengers in order to avoid it?

I saw Is passenger weight distribution important on a commercial flight? but it is about the aerodynamic effects of passenger distribution, which are not relevant when the airplane is parked on the ground.

When FedEX used 727s a lot they had regular occurrences of cargo being loaded too far back while the front was empty. The airplane would sit on it's tail. Not usually damaging but having the front door quite a bit higher than usual was an issue. If no one was on board it was awkward to get it back to normal, and FedEX really doesn't like delays. At my airport in the 90s you often saw a post attached to the tail while they ere loading.

Highly unlikely a 747 will rise up like a bucking horse, but it is possible that you can take enough weight off the nose gear of something smaller that the strut can extend. This would make the cabin door rise by about a foot, probably hit the jetway, and upset most everyone onboard. What would the passengers probably do? That's right - run downhill.

To get a better idea of whether this was possible I looked at the weight and balance for a 737. The Airplane Characteristics document provides the necessary information to estimate how the center of gravity (CG) may shift due to passengers deplaning.

The information in the document shows between 89% and 96% of the weight on the main landing gear when the aircraft is within the proper CG range for a 737-800. The max landing weight is about 66,000 kg and the max zero fuel weight is about 62,000 kg, so a weight of 60,000 kg when arriving at the gate seems reasonable for a full flight. If 94% of the weight is on the main gear, this puts the CG at about 1m forward of the main gear, which is towards the aft end but within limits.

I considered the high density layout shown in the document, which is a single-class layout with 175 economy class seats at 32 inch (0.8m) pitch. The first row has just 3 seats and is located about 14m forward of the main gear, with each row of 6 located another 0.8m aft.

I assumed that the aircraft is unloaded from the front, one row at a time, and that each passenger (plus carry-on) weighs 85kg. For a rough idea of the results, consider that the CG starts with a moment of about 60,000 kgm1, and the rows forward of the main gear are an average of 7m forward, so removing about 8600kg from those rows will move the CG aft of the main gear and tip the plane. This means about 100 passengers, which is within possibility for 18 rows of seats.

So why doesn't this ever happen?

As I mentioned, it's very sensitive to CG. Only an aft CG will be an issue. Also, passengers in the aisle will help balance things out. Many airlines have larger seats with more room in front that will reduce the effect of passengers leaving these rows.

Another factor is baggage. As soon as the plane stops and shuts down the engines, the ground crew will often start unloading the plane. It will take a bit longer to position the jet bridge or stairs and begin disembarking passengers. Removing weight from the rear will help balance passengers leaving the front.

In reference to the post that created this question, it's unlikely that one passenger would make the difference in tipping the aircraft. However, it is entirely possible that fully unloading the seats in front and not the back, and having no one coming down the aisle, is a risk factor that flight attendants would want to avoid.

1: I know that the typical unit is Nm but we only care about balance here, not forces, so there is no need to complicate things with gravity.
2: This may seem strange but for the same weight % (which is how I'm comparing) each aircraft will have a different CG location relative to the main gear, due to the distance between the nose and mains changing. Also, different aircraft have different weights and different CG ranges.

One thing these answers miss is that fact that there have actually been a handful of tail tip incidents on the 737-900. Since it's happened, then the answer is obviously: yes, it's possible. See, for instance this video of a Delta 737 tipping. There was apparently just one at TLV. United warned its pilots about the situation and put in place some procedures to better load cargo and ensure bags are quickly removed from the rear cargo bin before allowing forward passengers off.

To help prevent this, United is rolling out tail stands for these aircraft. Delta has used stands too. This discussion at airliners.net has more from some employees who've used them.

A quick search reveals it has happened on cargo planes:

Usually passengers are not that heavy, and there isn't really that much room for 300 people to rush to the back.

Most times when tipping is a risk is with smaller aircraft that have the cargo loaded before or after all the passengers in behind the passenger deck. The cargo aircraft you see above are also shifting substantial weight in a very organized fashion. You are gradually moving each container forward, while leaving the other ones behind the main gear.

Tipping over a 737 is not a trivial task I could only find very few occurrences online. Here is why I'm not buying the tipping over argument from the OP at Travel SE:

Most aircraft are designed with bit of weight on the nosewheel anyways to aid steering. If it is too little, it would just slip when they tried to turn.

One possibility is weight and balance related- all jetways have a little 'shoe' that detects if the door is about to contact the jetway floor. If this is the case, it either lowers the jetway or sets of some alarm. The weight shift, while not enough to tip the aircraft over, combined with a high jetway position could have triggered the shoe and they might have waited for the gangway to readjust accordingly. 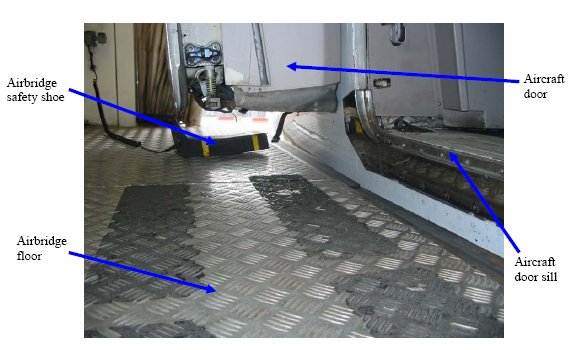 She might also just have noticed something that required a few seconds of waiting, such as somebody walking up the stairs with prams stored in the cargo hold for the family that just disembarked. Reading up on the OPs comments that she was cabin focused, maybe she just spotted some bag in the luggage rack that was unclaimed and wanted to make sure nobody forgot stuff while deplaning, hence holding up the cabin until it was claimed.

With the 737-900 tipping is a real issue. IMHO the lack of incidents is down to luck more than anything else. This was an unloading incident. The rampers can be seen removing bags (weight) from the front pit. Added to this, normal unloading sees all of the 1st class passengers leaving the aircraft followed by economy passengers row by row, front to back. This means at some point all of the passengers in front of the main undercarrage are off the aircraft while all those behind remain on board. The extra length of the 900 means that the combined weight of the remaining passengers is further back than that of a 700 or 800. When this is added to an empty front cargo/baggage pit tipping is a very real possibility. The Airlines and Boeing know this problem exists with the 900 and are taking it seriously enough to develop tailstands similar to those used by cargo operators on their 747 freighters.

The reason for this possibility is the way the tricycle landing gear works. In a classic design, the line from the main wheels to the centre of mass (CM) (projected on the vertical plane of symmetry) comes at an angle of 15° forward from vertical. This is only slightly more than the angle to which the aircraft rotates during takeoff. The whole point of this arrangement is that the aircraft could rotate with normal pitch input, and similarly be controllable on landing when touching down on main wheels.

With the CM slightly aft for whatever reason, the airplane will not need much force to tip over, and may remain stable in such position.

Generally, the aircraft with tail mounted engines are more prone to this phenomenon. Most of their payload is located forward of CM (because of the heavy engines on the back), so invariably they have very aft CM when empty. Tu-154 was known to tip over by hand force when empty (typically, when a mechanic was doing some service on the tail).

IL-62 (one of the few airplanes with 4 tail engines) has a special tail wheel to prevent this. Il-62 support wheel http://cdn-www.airliners.net/aviation-photos/middle/6/3/9/0623936.jpg Source

P.S. You can find a galore of tipped aircraft of all kinds in this thread (scroll to the middle).

In the early '90s, I was at the front of the line on the tarmac to board a China Southwest Tu-154 (727ski) in Chengdu, up the aircraft's rear airstair . We waited a long time and then the line for the front door of the plane boarded. The miliman managing our line held us up, while watching the front passengers walk up the forward ('58 Buick-like) airstair. I gave him a questioning glance and he stuck his fingers out like a pistol, then tipped it back with a grin.

This may be only lore, but I was told that the Tu-154 gear was designed a bit farther forward than the 727 because of the larger wheel (rough field) assembly and greater sweep of the 154's wing.

3
Why would an airplane tip backwards during unloading?
29
Is passenger weight distribution important on a commercial flight?
30
How does a commercial airliner measure its weight/mass?
14
How would a tricycle-geared aircraft be recovered from a tip-up?
8
Why does the DC 4 airplane not tip backwards?
5
Is it viable to put an engine at the rear of the plane like in this photo?
1
Why should the centre of mass be ahead of the centre of pressure?