Dead reckoning navigation: gyromagnetic compass, how it is stabilized?

I am studying aircraft navigation systems, as what concern autonomous navigation a compass is obviously essential, but magnetic compass is not reliable in short term maneuvers due to accelerations so it has to be stabilized by a directional gyro. What i don't understand is how the gyro is connected to the compass and stabilizes it.

In modern airliners is this device still used ? Is there an electronic substitute with no mechanical gyro (a part from GPS system) ?

Gyromagnetic compasses do indeed exist even in smaller aircraft, and need not be overly complex. The basic principle for an analog system is as follows:

Heading is measured against a gyro rotating in the vertical plane (just like a normal heading indicator). The gyro may be in the instrument case, or electronically repeated from elsewhere in the aircraft.

The earth's magnetic field is sensed by a sensing unit, a "Flux valve" usually located in the wing, or otherwise in a good position to minimize electromagnetic interference from the aircraft.

The gyro position and the magnetic reference are compared electronically and the resulting difference becomes an error signal. This error signal is sent to electric motors on the gyro frame, which will move to very slowly (a few degrees per minute) correct the gyro to align with the magnetic reference, combining the short term accuracy of the gyro with the long term accuracy of the earth magnetic field. To further enhance accuracy, cut-out switches cuts the error signal out when the aircraft is banking/accelerating, as this tends to give a less precise magnetic signal from the flux valve, while a gyro is unaffected by it. See the Bendix King KCS55A for a real life example.

The IRU will in that case (among other things) act as a kind of gyrocompass, finding true north by leveling and rotating 3 nowadays usually mathematically modelled gyro planes (solid state Ring Laser Gyros, no moving parts), to align with true north, by sensing gravitation and angular movement around gyro axes from the rotation of the earth. The planes are then kept level by integrating gyro data, and filtering/fusing it with accelerometer data, movement over earth curvature, Schuler tuning, other sensor data etc.)

How is the gyroscope connected to the compass? In small aircrafts, they don't. The gyroscope itself has no idea which way is North. There is a knob next to the Direction Indicator which rotates the display. You turn it to synchronize the instrument with your magnetic compass.

As you fly, the gyroscope will drift, so you have to synchronize it once in a while. The magnetic compass is not accurate if the aircraft is turning. Therefore, you should only synchronize when flying straight. 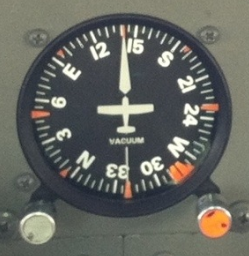 In this picture, the left knob rotates the instrument. The right knob sets the heading bug.

10
How did Charles Lindbergh use dead reckoning over the Atlantic ocean?
13
OBI, RMI, HSI... What combination do GA aircraft w/o glass typically have?
2
How would you use the mental clock code to solve this dead reckoning problem?
1
How do navigation displays depict turn anticipation?
4
How do you realign a directional gyro in an area of magnetic unreliability?
4
Do large cities contain enough iron to significantly affect an aircraft's magnetic compass?