Why is stall speed listed in a POH?

In this comment on this question about stall warning systems, it was stated that:

You can stall at any airspeed (see this question and this one) and in any attitude, only the AoA is important because that's what causes the airflow to separate from the wing.

I can understand how flying slower than the listed speeds would cause a stall, but the comment above seems to imply that one could stall the plane by flying at 60, 90 or even 120 KCAS but at a high AoA.

Those stall speeds are derived for specific conditions. In the case of that POH those speeds assume level unaccelerated flight, 2550 lbs gross weight, standard atmosphere and no wind. They are given as a speed rather than raw AoA because most non-aerobatic small airplanes lack AoA indications in the cockpit, while all have airspeed indicators. A non-aerobatic airplane also spends most of its time in the part of the flight envelope where the assumptions needed to list a stall speed tend to be valid.

The stipulation of level flight means the relative wind is fixed, thus the AoA depends only on the pitch attitude above the horizon. For an given weight there is a relation of pitch attitude required to maintain level flight for a given airspeed. Given these specific stipulations, you can determine the airspeed that results in the critical AoA being exceeded.

If any of the criteria listed above are not true, then those published stall speeds are not meaningful to you. You can stall at any attitude and at any airspeed.

To see the true relation between airspeed and stalling you need to consult a Vg diagram. 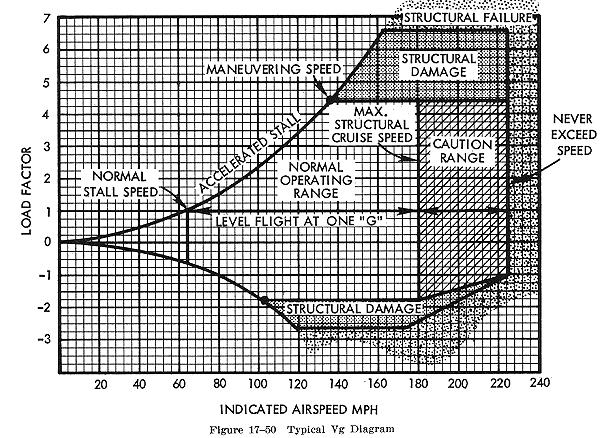 The curved lines starting at 0 MPH and 0 load factor represent the stall speed for a given load factor. The stall speed listed in PoH you quote is specifically the point noted "Normal stall speed" on this chart (this chart isn't for the same airplane, so the numbers will differ).

Most small planes do not come with an AoA sensor or display, so giving the stall AoA isn't useful to the pilot.

The bulk of flying is done in the vicinity of level flight, no roll. When in that configuration, there is a simple relationship between airspeed and angle of attack. So the airspeed provides useful information about how the wing is likely to be doing. It must be understood by the pilot when that relationship is no longer valid.

Cessna 172s don't have an AoA indicator or gauge and even today most light aircraft still don't, although you can add them to some models and the FAA would like more aircraft to have them. So in the absence of an AoA instrument, airspeed is used as a rough proxy, assuming 'normal' flight conditions.

Crudely put, if your C172 is flying at a more or less steady 110kts then the AoA is low and you have a lot of 'reserve' before you stall; if you're flying at 60kts then it's high and you have only a little reserve. This is why watching your airspeed closely on final approach is essential.

But because airspeed is only a proxy for AoA, it isn't a completely accurate way to know how close you are to a stall. Changing the load factor (roughly, the G force on the aircraft) changes the stall speed but not the critical AoA, which always remains the same (18° is commonly mentioned for light aircraft, but that's an approximation). The diagram in @casey's very useful answer shows this clearly.

Finally, note that 14 CFR 23.49 says that light aircraft must stall at a calibrated airspeed of 61kts or less, there's no mention of AoA.

Not the answer you're looking for? Browse other questions tagged aerodynamics aircraft-performance aircraft-limitations or ask your own question.

35
How does stall depend on angle of attack but not speed?
41
How do aircraft stall warning systems work?
31
What is the immediate cause of stall?
12
Why does stall speed decrease when flaps are deployed?
6
Does the expression "stall speed" have a definition?
9
What are the landing stall speeds of a Cessna 172?
0
stall with max power
0
What is the significance of stall speed

8
How will flying through mountains cause altimeter problems?
16
Is there anything extra required to spin a Cessna 172 in the Utility category?
8
Are the vortex generators on the Cessna Caravan necessary and sufficient for safety of flight?
1
What is primary cause of shock induced separation (shock stall)?
2
Why does the effective alpha/CL increase at wingtip of swept wing?
2
Why isn't Vy lower than the speeds for best L/D ratio and best glide ratio in an airplane with a piston engine and a variable-speed prop?
0
If "all flying rudders" for LSA aircraft need up to 40% less area, what about "all flying elevators (stabilators)"?
3
Does adding high thrust prevent a plane from stalling?
2
What is the indicated airspeed necessary to exit ground effect on takeoff?