How do pilots determine the takeoff distance of an aircraft?

takeoff flight-planning flight-testing
Share
Improve this question
asked May 20 '15 at 16:30

Most airplanes have a POH (Pilot Operating Handbook) with a table on aircraft distances. Here I have included one for the C172. 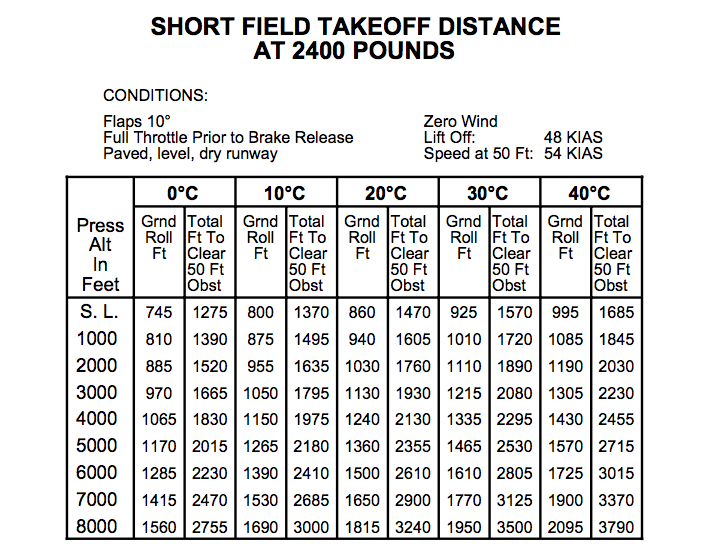 Takeoff data is calculated using performance charts and/or software. Data input into the algorithm include:

The air carrier I flew for had a performance chart for every runway we operated from (all scheduled and alternate destinations) that we could reference for the max allowable takeoff weight for that runway, flap configuration, wind condition and temperature. We didn't actually calculate the takeoff roll distance, but rather that we were below the max weight that could accelerate to V1 and stop within the distance provided by the runway in the current wind, temperature and aircraft configuration.

The previous answers are indeed correct; I will take it one step farther up the stack, though, and make a point that may have been unclear and addresses an assumption.

The pilot doesn't calculate take-off distances; they are looked up.

As mentioned, external data sources are used. The manufacturer of the aircraft, based upon their own math and the results of real-world-testing, is the authoritative source. Once it's in the operating handbook, you can be confident of those numbers (and, in fact, shouldn't second-guess them without a bloody good reason). As was also mentioned, some operators do their own testing; these results then go into the operating handbook, and the pilot is then expected to be able to count on those numbers as long as they follow the same procedure.

One of the most important aspects of flight is consistency; given the same external conditions, all aircraft of a particular model and particular takeoff weight should perform very similarly. This is more than just minimums. In the case of a broken instrument, whatever is being measured by the broken instrument can usually be inferred from other instruments. An example would be airspeed; if your airspeed indicator is broken, but you know your engine RPM and know that you're not climbing or descending, then you should always be about the same airspeed given that engine speed. A Cessna 172S would always be very near 120kts at 2400rpm at 2200 pounds weight. This consistency is what allows those numbers to be recovered and depended upon. (pulling numbers from head; the point is that you should be able to go into ANY Cessna 172S and expect the same performance as long as the plane has been properly maintained).

This is also true of many other critical aspects of an aircraft's performance. Climb rates, fuel consumption, rate of change-of-direction in a turn... these numbers all have to be accurate, as they can mean the difference between making the runway and becoming a news story.

Besides using tables, aircraft manufacturers also provide a takeoff chart, like this:

The chart goes from left to right:

Some manufacturers provide tables. Some provide charts. Some do both.

Not the answer you're looking for? Browse other questions tagged takeoff flight-planning flight-testing or ask your own question.

8
What would be the ground roll and total distance to clear a 50ft obstacle given these conditions?
8
What are the meanings of various reference lines and sections in a take-off distance graph?

2
How to calculate normal takeoff ground roll when the POH only has Short Field Takeoff tables?
2
Is there a formula to calculate take off runway distance for commercial planes?
1
What are the takeoff and landing distances of motor gliders?
2
Why don’t aircraft undergo contaminated-runway landing-distance and rejected-takeoff certification testing?
0
What's the relation between speed of an aircraft and takeoff distance?
5
How much actual difference does fixed pitch propeller make in takeoff distance?
4
What do we mean by taking the lowest of ZFW; TOW and LW to determine the maximum takeoff weight of the day?