Why does the Harrier jet have four landing gears?

I was looking at pictures of Harrier jets and I noticed something. 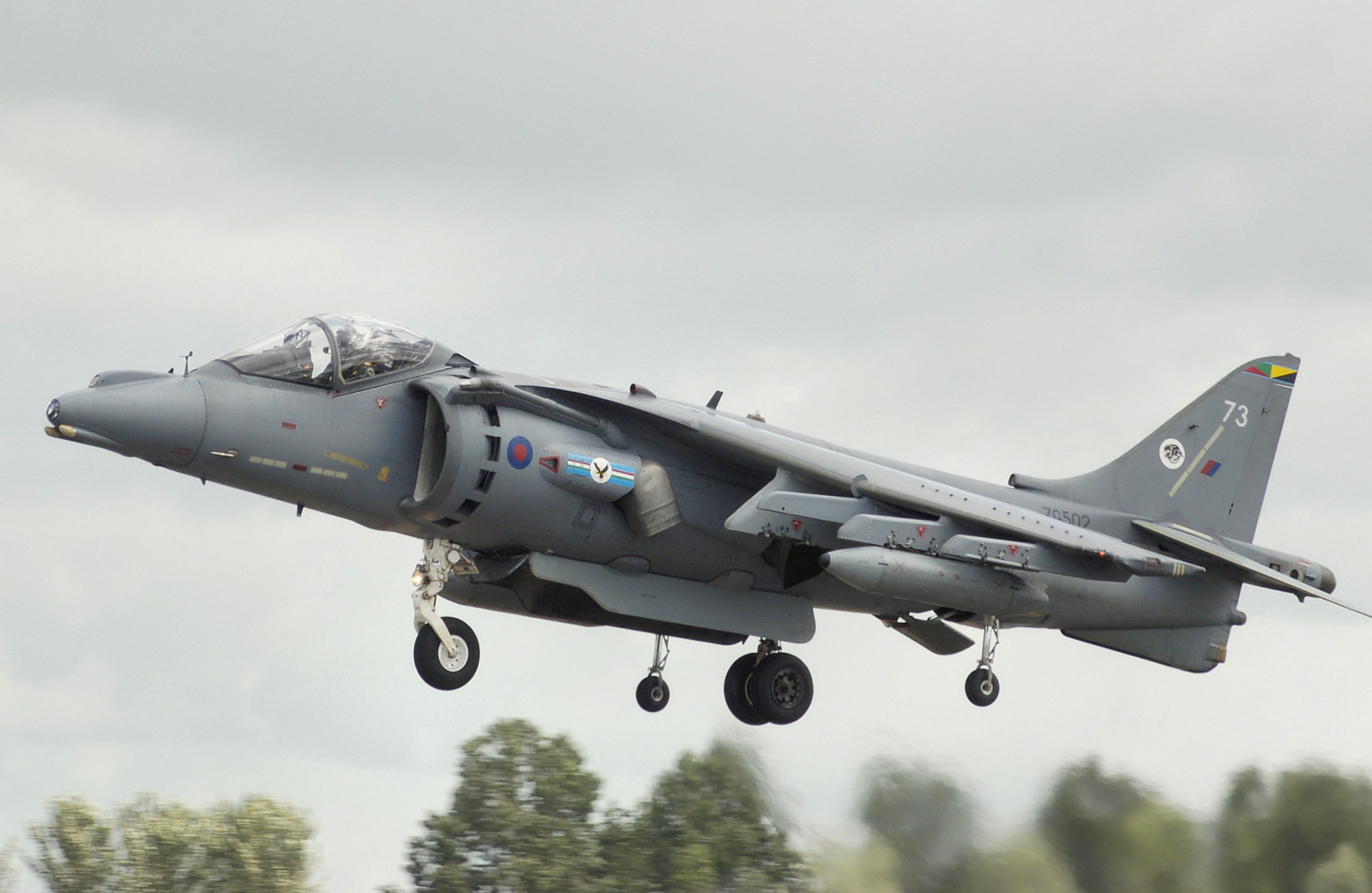 They have four landing gears. That seems pretty unusual for a fighter jet - most have only 3 in a triangle formation.

What is the reason for this 4 point configuration? It seems to just add complexity and cost without really increasing stability.

The main load bearing landing gear is in a bicycle setup, with 2 outriggers for stability.

This allows the gear to be lighter, stay close to the center and out of the way for the jet blast.

The Lockheed U-2 also has its gear in the bicycle configuration and takes off and taxies with detachable "pogo" outriggers for stability.

The Harrier is designed around its rather large centerline engine with its 4 non-standard exhaust ports. In order to balance properly, the engine's nozzles have to be in just the right place and we can't have annoyances like landing gear doors opening just before landing and deflecting the thrust stream that is keeping the thing in the air.

Fighter jet wings are typically too thin to fold the gear into them like on some airliners (and the bombs / missiles get in the way too).

So, the gear gets to fold up into the space just behind the aft nozzles where it doesn't disturb anything important. In almost every other jet fighter the engine occupies this space instead. Yes, tricycle gear makes for easier landings but as this plane is designed to land straight down that isn't a big issue. And we tend not to put green pilots into the things either so if they do need a regular runway the driver should be fairly good.

And if the Harrier had been a conventional terrestrial fighter, it probably would have used a ubiquitous tricycle landing gear. The driver for Harrier's unusual landing gear configuration is the requirement to hover via an unconventional single engine vs available fuselage space. This necessitated that the Rolls Royce Pegasus engine to be located directly over the center of gravity for the aircraft. Consequently, this dictates the placement of the engine right on a/c centerline about midway along the fuselage and the engine now occupies much of the fuselage space which could normally be used for stowage of a tricycle landing gear when retracted. The rotating engine nozzles and their associated exhaust also would interfere with a tricycle main gear located on the fuselage. Designers both at Hawker Siddley in the 1960s and McDonnell Douglas in the 1980s looked at the problem and concluded that a bicycle type landing gear mounted fore and aft of the engine with retractable outrigger gears on each wing represented the best solution in regards to weight and balance, structure, and drag for the aircraft.

This was the lowest mass solution at the time of P1127 development.

Remember that weight is at a premium for vertical take off. The first hover tests of the P1127 prototype were only possible with fuel for only 3 minutes in the tanks and 700 lbs of equipment stripped from the airframe. A conventional landing gear would had made hovering impossible in 1960.

But be warned that this gear layout will not be easy to get right. It took until 1967 to get it to behave well. What went wrong?

Only in May 1961 was the first conventional take-off possible. The nosewheel steering system was barely useable, the brake judder was severe, the anti-skid often failed and the pilot could not feel that the wheels were skidding at any time. Several tyres were burst.

The Harrier's wings have large anhedral, the wingtips are close to the ground. Without the outriggers there is a risk that payload carried back to base on the outer pylons gets damaged if the pilot sets down the aircraft with a roll angle or a roll rate causing a roll angle to build up.

Not the answer you're looking for? Browse other questions tagged military landing-gear harrier or ask your own question.

1
What are the extra wheels for on the Harrier series?
3
Why does Harrier have split hot exhaust nozzles?
1
I need some help to understand the rationales behind some STOVL jet designs, especially the Pegasus-Harrier configuration

28
Is there a good reason why modern airliners can't have conventional landing gears (vs. tricycle landing gears)?
113
Why does it take so long to develop modern military jets?
4
Why don't nose landing gears have brakes?
3
Why does the US Marine Corps fly the Harrier, a VTOL or operationally STOVL aircraft?
18
How does the Harrier avoid engine damage when operating from dirt fields?
3
Why landing gears still need bungee springs?
3
Why does Harrier have split hot exhaust nozzles?