What is the purpose of having contra-rotating props on an aircraft?

Why do planes, like the famous XF-11 and the Tu-95, have contra-rotating props? What is their purpose? 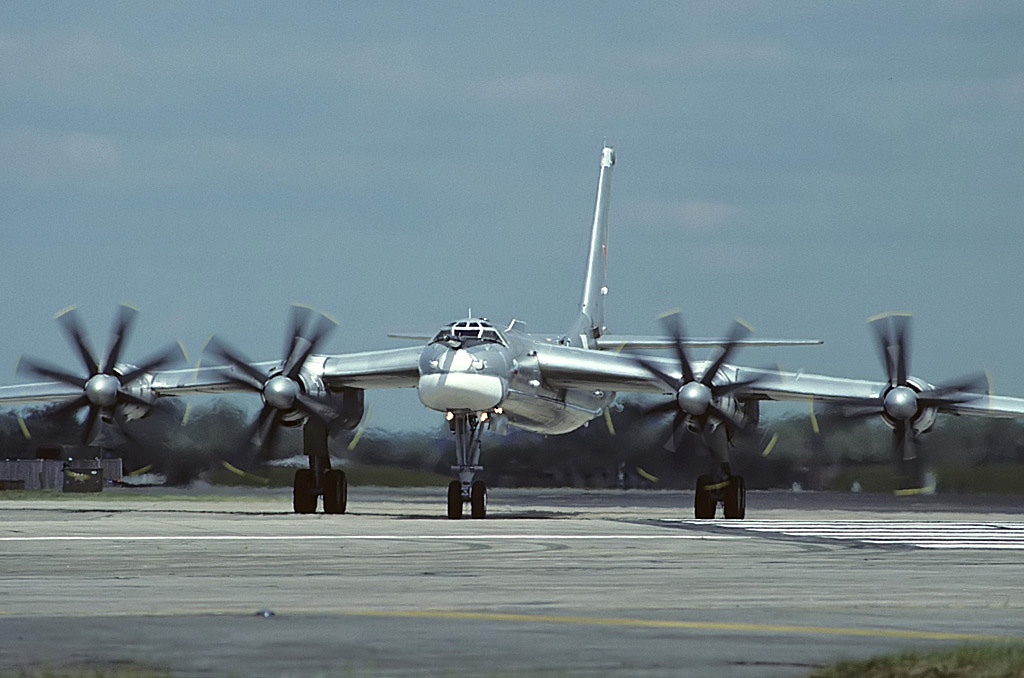 According to my experience, you have two problems with props:

Also you increase the speed of air accelerated by the propellers, thus the aircraft’s efficiency at relatively high travelling speeds is increased.

Normally, the propeller can only be operated effectively at low Mach numbers and increasing the RPM above a certain point will only cause the air behind the propeller to compress but not accelerate. Using a second propeller with higher pitch angles can generate high enough airspeed without the problem of compression because the second propeller is rotating inside the airstream generated by the first propeller.

Correction However, having a different speed and pitch WILL induce a torque effect.

The main advantage of contra-rotating props is the increased efficiency (6 to 16% according to Wikipedia). Another advantage is that the torque is pretty much cancelled out by the contra-rotating prop, but this is much less of an issue in aircraft with an engine configuration like the Tu-95 in your post. I would say, another advantage is the fact that this design allows for a smaller propeller diameter, allowing a smaller landing gear, etc etc.

The disadvantages may outweigh the advantages depending on the design. They are very complex. This may lead to high maintenance costs, or an unreliable design. Contra-rotating props are also extremely loud. The Tu-95 is known to be the loudest aircraft in the world. Rumors are that they can actually be heard by submarines.

The fact that there aren't many aircraft using this design is proof that it isn't very popular. As far as I know, the only reason the Tu-95 doesn't use regular turbine engines is because there were no turbine engines available that would meet the required specification during the design stage of the aircraft.

While there are theoretical benefits in terms of efficiency, the difficulties in gearing them have kept them from practical use except when used with very high powered engines. After a certain point, using longer blades becomes increasingly inefficient, and other strategies have to be used to increase the swept volume. An example would be the Spitfire, which went from 3 blades in early marks, to 4, 5, then a contrarotating 3+3 in the Mark XIX as the power of the engines increased over the production run.

Also, it is worth noting that virtually all turbines have many compressor stages which turn on one shaft but have static blades (stators) between sets which provide the benefit of reducing the tangential flow without requiring high speed gearing. This provides nearly all the efficiency increase without adding the mechanical complexity of trying to spin each stage in opposite directions at the high RPMs of a turbine.

Apart from the reasons stated above, there is another important one, specially valid for the Tu-95. The turbines of that plane are very powerful, the most powerful ever built. In order to convert that power in acceleration of a mass of air, you would need a very large and fast-spinning propeller, so large that the blade tips would surpass the velocity of sound. Thus, the only possible compromise for the giant turboprops of the Tu-95 was to fit each turbine with two large coaxial propellers, spinning in opposite directions. Even with this solution, the blade tips are supersonic, but not by much, and the propeller efficiency is good enough to propel the Tu-95 to speeds only slightly lower than its American jet-propelled counterpart, the B-52. The Tu-95, still flying today in the air forces of Russia, was a great technical success of the Soviet technicians.

Why do these planes have four sets of counter-rotating props? Not torque compensation - they have four engines and can simply zero out torque by having two turning clockwise and two anti- clockwise.

Counter-rotating props on fixed wing aircraft are a way to overcome the inherent limitations that propellors have in converting engine power into thrust. Propellor tip speed is the issue, once it reaches speed of sound a lot of engine power is required to overcome compressibility drag, and not useful in propelling the aircraft. So the disk size is limited, or the rotation speed of the blade. More blades help a bit if power is not the issue, but only a bit. More propellor disks help, but again only to a limit.

The Tu-94 had a similar operational mission to modern passenger jets: fly long range, close to the speed of sound. It first flew in 1952, a long time before high bypass turbofans existed: the jets of the time were wasteful with fuel, also a consideration in the design of the B52. While the US was working on more efficient turbofans, the USSR chose the other option: use two propellor disks. The second disk further accelerates air from the first disk.

New user Sam posts: Seems like we need to take a look at the potential better efficiency of wind turbines. Indeed a counter rotating arrangement can extract more power from a given air flow, but at what cost? Is tip speed breaking the sound barrier really an issue with wind turbines? Does the counter-rotating arrangement cost less than simply constructing another complete generator?

Here is an explanation of a contra-rotating propeller, explained its advantage and disadvantage.

As explained, each blade of an airplane propeller is essentially a rotating wing. As a result, the propeller blades are like airfoils and produce forces that create the thrust to pull, or push, the airplane through the air.

The high-speed rotation of an airplane propeller gives a corkscrew or spiraling rotation to the slipstream. The corkscrew flow of the slipstream also causes a rolling moment around the longitudinal (roll) axis. Note that this rolling moment caused by the corkscrew flow of the slipstream is to the right, while the rolling moment caused by torque reaction is to the left—in effect one may be counteracting the other. {However, these forces vary greatly and it is up to the pilot to apply proper correction action by use of the flight controls at all times. These forces must be counteracted regardless of which is the most prominent at the time.}

At high propeller speeds and low forward speed (as in the takeoffs and approaches to power on stalls), this spiraling rotation is very compact and exerts a strong side-ward force on the airplane’s vertical tail surface.

When this spiraling slipstream strikes the vertical fin on the left, it causes a left turning moment about the airplane’s vertical (yaw) axis. The more compact the spiral, the more prominent this force is. As the forward speed increases, however, the spiral elongates and becomes less effective.

One solution is by adding a second propeller behind the first, contra rotating and canceling the rotating moment.

Detailed answer - Propellers usually rotate in the clockwise direciton. Now recollect Newton's 3rd law - "Every action has an equal an opposite reaction". Here the "action" is the propeller rotating clockwise and the "opposite reaction" would be the aircraft having a tendency to turn in the anticlockwise direction (that is, towards left). Now this left turning tendency is going to be a pain for the pilots as they have to apply rudder pressure to counteract it. And that's why contra-rotating propellers were introduced!

As the name suggests it's basically 2 propellers rotating in 2 opposite directions (one would be clockwise and the other - anticlockwise). This is going to cancel out the torque effect!

Regarding noise of propellers at speeds close to sound barrier, you may have a look at the F-84 'Thunderstreak', propeller version video in YouTube, https://youtu.be/UFhSzReWTgs it has contra-rotating propellers, and is probably one of the fastest airplanes with this arrangement ever, the video discusses the development and findings of a contra-rotating propeller in a fighter flying close to Mach 1; at any speed, the aim of having contra-rotating propellers I guess is reducing the effect of torque that will tend to make the airplane turn in the opposite direction as the propeller, along the propellers axis, in a centrally placed, single engine airplane, a propeller rotating in a clockwise direction, looking from behind, will indice a force making the fuselage turning in the opposite direction, also the vortex and other changes in air column induced by the propeller may have an influence on control elements, such as the rudder

Not the answer you're looking for? Browse other questions tagged aircraft-design aircraft-systems propeller turboprop contra-rotating or ask your own question.

8
Why are contra-rotating jet engines so rare?
3
Do coaxial rotors provide twice the amount of lift?
4
Why don't contra-rotating propeller configurations with more than two propellers exist?
2
How can an airplane fly with single propeller without rolling over?
2
What is the difference between types of propeller?