How quickly should heading changes be accomplished?

While airborne if there needs a change in heading, then what is the rate of change of heading with respect to time?

Like, I want to change my heading from x degrees to y degrees, where the difference is 45 degrees, do we have some specific time limit in which we have to get this change and do we have some regulation/standard for specific rate of heading change?

According to Wikipedia, a "Standard Rate Turn" is three degrees of heading change per second.

The bank angle required to achieve this depends on your true airspeed; at a low TAS a standard rate turn is easily achievable with normal, comfortable bank angles (say, 20°, plus or minus). At high true airspeeds, the bank required becomes excessive, and "half standard rate" is used if anything is used, but at least in airline flying it's not particularly common to use either. We just reference an angle of bank — but what that gives you in degrees per second is variable (as a function of TAS again).

The upper limit of what an airliner (or pretty much any IFR aircraft) is going to give the controller in terms of turn rate is whatever you get with a 30° bank. And if that produces less than standard rate or whatever, then so be it. At high altitude (say 35,000' and above), even 30° can be on the edge of problematic (mainly, with regard to wing loading and Mach buffet), and controllers are used to rates of turn that are less than what you'd see down low.

The Turn Indicator (shown below) has a mark that shows a standard rate turn which takes 2 minutes to go all the way around. The heading indicator (on the right below) can be used to determine how far you have turned or how close you are to your desired heading: 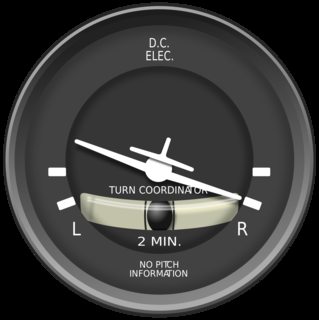 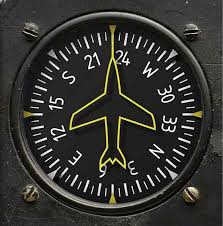 There are no "regulations" about turns. A pilot will typically use standard good pilotage skills to make a turn of a type which is needed for the situation. In small planes, the pilots are taught to make crisp, decisive turns to get on course as soon as possible. Large planes with passengers tend to make very gentle turns in order to keep the passengers as level and undisturbed as possible.

Note that a pilot can make a controlled turn onto a heading with just the turn coordinator. In a standard rate turn you do 3 degrees per second, so if you need to turn, say, 15 degrees, you adopt a standard rate turn and count 5 seconds. This technique can be used to escape after flying accidentally into a violent storm. The pilot makes a standard rate turn (15 degrees) then counts 1 minute (60 seconds). This will cause the plane to reverse direction and hopefully lead out of the storm.

Not the answer you're looking for? Browse other questions tagged heading or ask your own question.

14
How do I convert true heading to magnetic heading or the other way around?
4
Why separate autopilot controls for course and heading?
12
Is the heading used near the pole?
13
What is the difference between azimuth and heading?
13
How to calculate the heading correction with a circular flight computer?
9
How do I determine which radial intercept angle to use?
1
Calculating distance from VOR station with radial and heading
0
Could a high absolute difference between heading and course give a hint about weather conditions?