What is the function of the tail section on a fixed-wing aircraft? [duplicate]

In a generic fixed-wing aircraft like a Cessna, what is the function of the tail section, i.e. the rudder and elevators?

First off lets be clear that a tail section does the same thing on small aircraft that it does on large aircraft.

Second off lets be clear that a tail section is not necessary for flight and there are planes like the Northrop Grumman B2 that dont have a tail section they are affectionally called "Flying Wings".

The short answer is that the rudder (vertical part) controls yaw and the elevator (horizontal part) controls pitch. A plane is capable of movement and similarly adjustment in all 3 dimensional axes. But lets dig in a bit:

The Elevator: This is usually located in the back but by no means has to be. Burt Rutan has implemented many designs that have forward mounted elevators. As to functionality they essentially allow you to alter the pitch of the plane which in turn alters the angle of attack of the wing which furthermore has a direct effect on the lift generated by the wing. In a simple world we could say that when you pitch up you climb and when you pitch down you descend. The reality is that the engines thrust plays a large factor in this. For example if you are flying at a level attitude and increase thrust your will increase speed (and the speed of air over the wing) which will generate greater lift and cause the plane to elevate with out a pitch increase (you will have to apply some force to keep the plane level though). The elevator provides a way to easily alter the pitch of the plane (and angle of attack) so you can climb when you want. Generally speaking you will also add power for the climb. For a more lengthy explanation check out the wikipeidea article.

The Rudder: The rudder is mainly to control the left-right yaw of the aircraft. In a single engine prop plane this can be used to help overcome the left turning tendencies created by uneven force of a spinning prop (P-Factor). In a more general case the rudder is often used to correct yaw when a heavy crosswind is present on landing. It is also used in flight to ensure your turns neither skid or slip (stay coordinated) remember "Step On The Ball". For more reading check out Wikipedia

This picture shows the axes of movement pretty well. 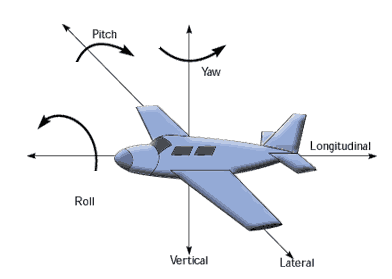 The function of the tail section of a conventional fixed wing aircraft is to provide stability. It also holds two important control surfaces; the rudder and the elevator. 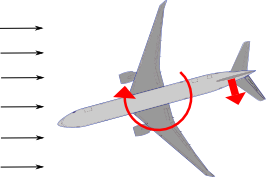 The vertical tailplane also contains the rudder. The rudder is a control surface which controls the aircraft's yaw moment. The pilot controls the rudder by using the rudder pedals. This allows the pilot to correct disturbing pitch moments which might come from the propeller or to bring the aircraft intentionally into a sideslip, for example for a crosswind landing. During turns the rudder is used to ensure the turn is coordinated (keep the sum of the weight and centrifugal force pointing down the vertical axis of the aircraft)

The horizontal stabilizer also contains the elevator. This control surface allows the pilot to control the pitch moment of the aircraft. Aircraft can be trimmed such that they maintain a constant pitch angle at constant speed without the need to constantly give elevator inputs. This trimming is done by either a small trim tab on the elevator, but in other aircraft the angle of whole horizontal stabilizer can be changed to trim the aircraft.

Good answers, but let me make it short and simple. The tail (empenage) mainly contains the vertical stabilizer and the horizontal stabilizer.

This video shows what happens when the vertical stabilizer is lost. The plane has no way to stay pointed into the wind - very bad.

When the horizontal stabilizer is lost, the plane instantly noses down. (I tried to find the video of the dam-busters practice where the Lancaster bomber is going along above the water. It drops the cylinder, which hits the water, bounces up, and slices off the tail of the bomber, which noses into the water, at 100+ mph.)

26
How does an aircraft tailplane work?
9
Do all aircraft need to have horizontal and vertical stabilizers?

7
Why are rotary wing aircraft less efficient than fixed wing aircraft?
5
Can ailerons be used for pitch change in the event of elevator failure?
12
What is the aerodynamic effect of a panorama (skydeck) near the tail section of a commercial airline?
3
How can I find the optimum chord wing length for this wing?
3
Is the aircraft neutral point a function of the tail incidence angle?
0
Can airflow reverse over the flight surfaces of a uav in high wind conditions
0
If "all flying rudders" for LSA aircraft need up to 40% less area, what about "all flying elevators (stabilators)"?