Why do certain aircraft's landing gear tilt up?

Why do the main landing gears of aircraft like the A330, 777, 787, etc tilt up? This does not happen with the 767. Interestingly, for the 747, the inner landing gear does not tilt up while the outer landing gear (under the wing) does. Why does that happen? 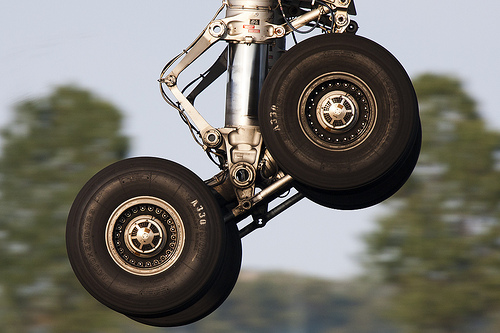 Pulling mostly from the answers provided here it seems that

You can check the link for the rest of the explanations.

I've answered this before, but I need to revisit it with references -- I previously got one part right, but missed the real reason. As others have commented, the rationale of fitting into the wheel well is still questionable -- the A330 arrangement does not fit the bill for that reason and others, especially that during retraction it un-tilts and shortens (video). The A330/777 arrangement bugged me for five years now.

The tilt -- based on its inventors[1] and a book on landing gear design[2] -- is to reduce the touchdown drag loads (spin-up force), which in turn allows for lighter structures.

In this way the drag loads resulting from overcoming inertia of the two wheels are imposed in succession, rather than simultaneously; and the maximum instantaneous drag load is greatly reduced. A related advantage of constructions embodying the present invention is that the reduction in maximum drag loads permits most, if not all, parts of the undercarriage to be more lightly constructed.[1] 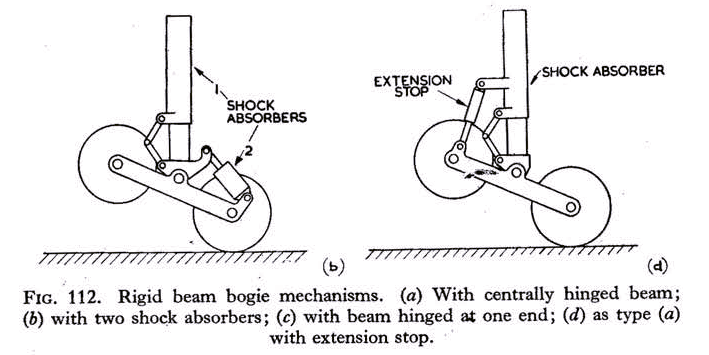 In Fig. 112 (b) is a similar design except that the hop damper is enlarged until it can contribute substantially to the overall energy absorption at landing. The back wheels now contact first and are spun-up before the front wheels, thus spreading the high drag loads over a greater time interval, and reducing their intensity. The rotation of the bogie is delayed by the damper long enough for energy to be absorbed without imposing abnormally high dynamic loads on the rear tyres (which are obviously designed to carry half the total load only). The total shock absorber travel is shared between the main and the rear shock absorbers, but the whole process of energy absorption requires careful prediction to take advantage of the possibilities. It is difficult to draw a conclusion whether this system is better than the earlier type. It is more complicated but under favourable circumstances seems to be slightly lighter.[2]:120–121

I will use the 757 as an example, but everything is true for every multi-axle landing gear I've ever been around (except the 777).

The truck (bogie) is tilted into a specific angle so that it'll fit into the wheel well, all other functions are secondary. The truck must be angled because the landing gear strut itself is not completely perpendicular to the fuselage, due to other considerations. This is what the 757 Maintenance Manual says about the truck position actuator (aka tilt actuator): "This actuator applies the force to put the truck assembly at an angle to permit clearance with the structure."

This YouTube video shows the extension/retraction of the 757 landing gear, you can clearly see in the video that if the truck was not at a specific angle it would impact either the keel beam or the wing to body fairings.

The reason it stays tilted in the down position comes down to cost and complexity. The actuator is a simple one-way hydraulic actuator, meaning it can only be powered into the extended direction. Any time hydraulic power is supplied to the landing gear, either in the up or down position the truck positioning actuator is powered on the extended side, regardless of gear position.

Extra information, for the non-TL:DR crowd

When the aircraft touches down, the actuator attempts to keep the truck tilted, which massively increases the pressure in the actuator (normal system pressure is 3000psi). A check valve prevents the hydraulic fluid from being forced back into the hydraulic supply system, then at 4500 psi dumps the fluid into the return allowing the actuator to collapse. At takeoff when the aircraft rotates it again forces this actuator even further into the retracted position as the aft wheels get closer to the fuselage. As you can see the stroke of this actuator must be quite long. So fully extended gives you a toe up position and fully retracted gives you a toe down position.

To have the truck powered to any position other than fully extended would first require the ability to power in both directions, which adds a lot of complexity to the hydraulics system and actuator and this would only get you fully extended and fully retracted. To position the truck in any other position would require complex control valves with position feedback or multi-position actuators and also sequence valves to ensure any time the gear was not down and locked the truck was in the proper position. Since there is no need to flatten the truck for landing, this is not down.

To address the nose down moment that has been mentioned, while technically this does happen the moment is very small relative to the aircraft and is over in a fraction of a second. The actuator itself is fairly small, smaller than a spoiler actuator and reacts its load on the strut very near the truck pivot pin, so the moment arm is short. Also this same force would fight against aircraft rotation at takeoff.

The 767 does nose down because its struts are at a different angle than the 757 and they have to be nose down to fit in the wheel well, this is a design decision due to a limitation at LGA.

Not the answer you're looking for? Browse other questions tagged boeing landing-gear airbus boeing-747 boeing-777 or ask your own question.

1
Why do the landing gears of Boeing 767 and certain Airbus aircraft tilt down?
0
Landing gear sequence

17
How do landing gear retracting into the wing affect performance when deployed?
10
How much extra drag does landing gear incur?
20
Why is the nose landing gear of a Rutan Vari Eze up during parking?
5
What defines a landing gear bogie?
6
Do the landing gear modules rotate?
3
Are nose wheel tyres designed differently from the main wheel tyres?
3
Why didn't Boeing make the Sky Interior for the Boeing 777?
7
Why was the A340 developed with four engines?