Would it be viable to install a screen in front of jet intakes to prevent them from sucking in birds?

Why isn't there a protective screen with large diameter holes (approx 2') mounted in front of the jet engine intake to protect the turbine blades? This would keep larger birds and large ground debris from getting sucked in, which can cause serious internal engine damage.

Modern high-bypass turbofan engines work by pulling in immense volumes of air and accelerating it. A screen as proposed would make that task far more difficult, which would ruin the efficiency of the engine. It's also pretty well unnecessary.

Jets worldwide take plenty of birdstrikes every day. Unless the pilots see it (hitting the windscreen will do that) or hear it (hitting something near the cockpit) or the bird goes into the engine core (which causes the smell of burned bird in the air conditioning), the chance that the crew knows about it before the next walk-around inspection is pretty slight. The vast majority of birdstrikes are utterly inconsequential. (Except for the bird -- ruins his day pretty thoroughly!)

Yes, there are a small number of very highly visible events where birds do disable an aircraft -- the "miracle on the Hudson" and the loss of an AWACS in Alaska come to mind, and there are others. And it's possible for a birdstrike on an engine to cause significant damage IF the bird is large enough AND it goes into the core, but in the big picture, that is actually pretty uncommon.

Thus, the aircraft manufacturers and operators end up accepting the risk of a catastrophic birdstrike, because the alternative of protecting the engine as suggested is too expensive when the effects on the efficiency of the engine are considered.

One other point, bird flesh is pretty easy for an engine to chop up and digest. If a big bird hits a metal shield at high speed, there would be the risk that the shield could be damaged enough that some of the metal would break apart and go into the engine as well, and THAT would cause far more damage than just the bird.

Fun video of stuff being shot into an engine during testing

Screens were actually used on the first prototypes of the Me-262, but soon abandoned when they were found to be more of a burden than a help.

If you look carefully at the picture of the Me-262 V3 below, you can see the spherical screens on both engine intakes. 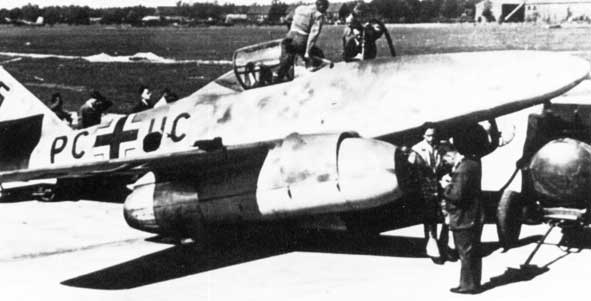 Today, screens are used only in ground tests. See the picture below for the Rolls-Royce version: 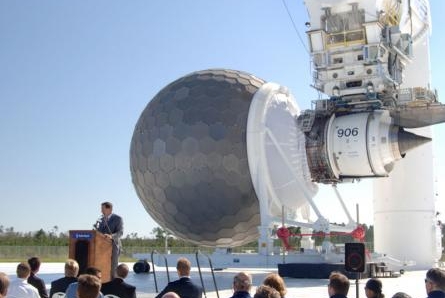 The big surface of the sphere reduces aerodynamic losses, which are small under static conditions anyway, but this contraption would obviously be totally impractical in flight.

A few Russian/Soviet fighters had retractable FOD screens on their engine intakes (MiG-29 and Su-27 IIRC). The assumption was that they would operate from damaged runways or roads and the engines would need protection against Foreign Object Damage (FOD).

There are three problems with this idea:

(1) To make a screen strong enough to withstand the body of a 15-to-20 pound bird hitting it at 500 miles per hour, would require thick wire which would significantly block air flow.

(2) Such a screen would be very liable to collect ice, so it would have to be heated to high temperature. This would be expensive and would increase the maintenance burden for the aircraft.

(3) If part of the screen failed and broke off for any reason and went into the rotors, it would destroy the engine.

Also, it will distort the air entering the engine reducing the efficiency of the engine and increasing fuel comsuption.

Globally, the extra drag and the higher fuel consumption is more costly than the increase of weight needed for generating extra protection on the engine nacelle.

1
Would cone shapes grills in front of jet engines prevent damage in case of a bird strike?
2
Can a protective mesh protect engines from bird strikes?
0
Can commercial jet airplanes be designed to prevent a human from being ingested into the engines?
0
Why do air planes not have a "grating" in the front of the jet engines for safety?
0
Could jet engines have a grille to prevent bird or drone entry?
18
What are the reasons for an installed engine to produce less thrust than an uninstalled engine?
15
What are these engine inlet devices used for?
7
Why do Russian jets make a squealing sound?
6
Are jet engines affected by small bird (e.g. hummingbird) strikes?