Why does the US use two types of aerial refueling?

There are two main types of aerial refueling, the boom and the drogue. The US uses both, while most other countries use just the drogue.

How are they different and why does the US use both?

The flying boom method uses a rigid boom which is "flown" by an operator in coordination with the pilot in order to make a connection with a receptacle on the second aircraft. The boom is retracted when not in use. Though it can do damage if it comes in contact with an aircraft, the operator can quickly move the boom if needed. 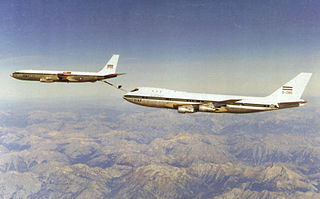 The probe and drogue method uses a trailing hose with a basket on the end. Pilots will guide a probe on their aircraft into the basket to connect with the hose. The hoses are retracted when not in use. Though the crew has less control of the drogue, which can still cause damage, there is less danger to the aircraft than from a boom, and it could allow the aircraft to stay further away from the tanker. 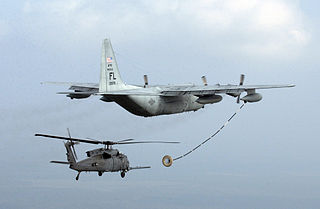 The boom method was developed early on in the Cold War, when Strategic Air Command had many large bombers that needed to be refueled. They needed a method that would transfer fuel as fast as possible in order to reduce the time it took to transfer the large amounts of fuel needed. Because the boom is rigid, it is capable of a higher transfer rate. The importance of bombers meant that SAC got their way, and the KC-135 fleet was equipped with booms. Today, almost all US Air Force planes capable of aerial refueling use the boom system.

The US Navy on the other hand, along with most aircraft in other countries, uses the drogue system. Though this method is not capable of the high transfer rates of a boom, it is much more flexible. A refueling aircraft may only be fitted with one boom, and this requires extra design work and integration with the fuselage. The drogue system, on the other hand, is more simple, and does not need a dedicated operator. This means that it can be more easily fitted to the refueling aircraft, even other fighter planes, and larger aircraft can have multiple drogues.

Another point is that smaller aircraft such as fighters are not capable of receiving fuel at the full rate the boom provides, so they have less benefit from the system. Although a boom can have a drogue adapter attached, this still commits the tanker to one aircraft at a time and one type of system per flight. Also, aircraft such as helicopters cannot use a boom system.

When the Air Force was looking at a replacement for its tanker fleet in the early 2000s, a study was done to determine what standard the new tanker should support.

The report suggests some options for the best combination of methods. In the end, the Air Force selected the KC-46 for the contract, which will include both the boom and the drogue options for refueling. This will provide better support to aircraft from other branches or countries, while maintaining support of the existing aircraft that use a boom.

The US Air Force and the US Navy have a very different history, so they approach things quite differently and feel their respective way of doing things is superior.

The US Air Force started as the Aeronautical Divison of the US Signal Corps and later became the US Army Air Forces (USAAF), and it inherited the traditions from the Army: Discipline and strict adherence to procedures, basically what was started when Baron von Steuben trained the first American soldiers.

The Navy used to give their commanders much more freedom: When away on a ship, the captain had to decide for himself what the best tactics would be. This can still be found in the Navy's flying forces today: Pilots are much more encouraged to think for themselves instead of following detailed procedures.

Therefore, both will instinctively reject what the other prefers: When the Air Force selected the F-16, the Navy had to prefer the F-18. And so on.

For aerial refuelling, it makes indeed more sense to use the boom technique when large amounts of fuel need to be transferred to big bombers. If you need to top up fuel for a number of smaller aircraft, however, the drogue-and-chute system is the better choice. The mutual competition between the Forces has only helped to cement this diversity.

The advantages of the boom over the drogue technique are:

Also most aircraft, including many of the USAF, can not accept fuel at the rate that a boom can provide, so much of the extra capability goes unused.

The Navy carriers also need to be self sufficient and so need to be able to launch their own tankers from their deck. Boom tankers are too large for this so the Navy relies on the buddy buddy system where one F-18 is the tanker and trails a hose for his buddy to refuel from.

The chief reason for this was fuel transfer rate vs flexibility for tactical aircraft. The flying boom, as pointed out by others here offers a faster fuel transfer rate and makes it more suitable for strategic operations ie refueling large bombers en route to their targets, as the USAF had largely utilized their tankers for. That being said flying booms require a specialized aircraft for that role whereas probe and drogue system can be employed much more flexibly on a wide range of airframes. The Navy and other NATO nations found this more convenient as a means to provide gas for tactical aircraft during operations as fighters are an almost universal Air Force commonidy and many nations were not equipped with dedicated tankers and strategic nuclear bombers. The Navy liked the probe and drogue system as well due to the limited space available on carriers for a fleet of tanker aircraft and it is more convenient for an exiting fighter or attack aircraft to use “buddy stores” - external tanks and a hose and reel pod to provide extra gas for the air wing. Cold War tactical operations, Operation Desert Storm and joint military operations in the years since then have made the USAF adapt its tanker fleet to accommodate both types of refueling systems. KC-135, KC-10 and the new KC-46 aircraft are equipped with both the flying boom as well and the probe and drogue refueling systems now.

Not the answer you're looking for? Browse other questions tagged military aviation-history refueling or ask your own question.

23
How is it safe for helicopters and Ospreys to refuel in mid-air?
13
Why are flying-boom tankers restricted to a single boom?
2
Technical factors to consider for retrofitting aerial refueling for commericial aircraft

21
Why are airships not more popular?
16
Why does Boeing name its aircraft B7x7 and Airbus names theirs A3x0?
14
How are in-air refuelling craft grounded to each other?
18
Why does an aircraft as big as the Airbus A400M use turboprops?
32
Why does an airplane captain sit in the left seat?
30
Why don't airliners use in-air refueling systems?
8
Which airports have the highest fuel upload?
4
How were fighter jets built in the 1950's?
8
What methodology did ICAO use to create the overall code nomenclature for airports?
1
Customs at refueling stops?