Is landing the 'wrong way' possible on an aircraft carrier?

I wonder if the arresting wires would work the 'other' way?

You're going to run into a few issues.

Below is a diagram of a typical aircraft carrier layout. Normally aircraft would land from right to left. The four cables are located closer to the right end than the left. The extra length after the cables is both to allow a "bolter" (YouTube) time to accelerate in case of missing the arresting hook; and to allow an aircraft that caught a cable time to decelerate.

Notice how far an aircraft can continue down the deck (YouTube) after catching the cable. Even if you catch the first cable, you might go off the aft end of the ship. 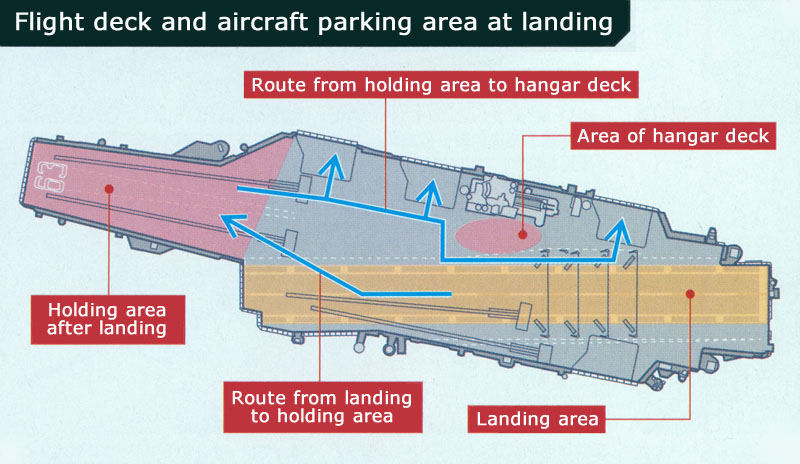 Another issue is the way that the arrestor cables work. The housing where the cable enters the flight deck is curved to allow the landing aircraft to pull on the cable as it decelerates. The cable is not designed to be pulled in the opposite direction, which could cause it to break (YouTube). 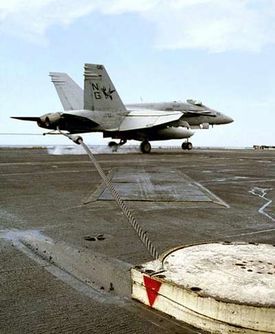 Aside from these issues, you would also lack the FLOLS system that provides physical guidance during the landing. And as voretaq7 also mentioned, you have to either touch down late, or catch the cable late, both of which could pose problems.

Fixed wing aircraft will never land the wrong way on the boat. However, I've done it many times in the H-3. It's a difficult landing even in a helo, the ship is closing on you and you have a tailwind. The approach becomes excessively steep very quickly.

Not the answer you're looking for? Browse other questions tagged landing aircraft-carrier or ask your own question.

14
Can a small plane be floated off of an aircraft carrier?