What vertical flight profile could be expected from an aircraft if the pilots were incapacitated?

If there were nobody at the controls what kind of vertical profile could be expected from, for example, a modern airliner?

After reaching the cruise altitude I assume the pilot just sets a nav route and altitude on the onboard computer or at least set the trim to avoid having to constantly adjusting the altitude manually.

Emergency descent (like during a decompression event where you need to get from cruise to 10k ft ASAP to make sure the people in the back survive) shouldn't make a nice curve. It only wastes time you don't really have.

Normal operation means the pilot activates the autopilot during cruise which will fly the programmed course set by the pilot. It will stay follow that course (or put itself in a holding pattern on the final fix) until it runs out of fuel or the pilot intervenes when it is cleared for descent. This happened with Helios Airways Air flight 522; both pilots were incapacitated shortly after ascent and the plane put itself in a hold and crashed when it ran out of fuel after more than an hour.

A plane where there is nothing controlling the altitude (when control is lost due to loss of hydraulics for example) will follow a phugoid cycle. That is a series of dives and climbs as the elevators gain and lose bite on the air with speed.

Any descent profile can be expected of an unpiloted aircraft, but generally nothing severe would be expected uncommanded and without stall occuring. Aircraft control surfaces (rudder, elevator, aileron) can be "trimmed" to maintain coordinated level flight. Elevator trim, in particular, is constantly adjusted (by the pilot or autopilot) so that if nothing was flying the plane it would maintain its present airspeed. A consequence of this is that a properly trimmed airplane will climb or descent to maintain the airspeed it is trimmed for.

Give the above we can say a properly trimmed aircraft with no pilot input could be expected to roughly maintain altitude and once out of fuel it will descend at whatever rate is required to maintain its trimmed airspeed.

The above assumes no autopilot or an autopilot in speed hold mode. An autopilot in altitude hold mode will attempt to maintain altitude as long as possible, and depending on the programming that might mean until stall occurs. When the stick shaker activates preceding the stall, that should disconnect the autopilot and this may be followed by stick pusher activation. In the end, if stall is avoided, the airplane will descend at the airspeed that autopilot last trimmed it for, which is likely a slow-ish airspeed (close to but above stall speed at present altitude).

Large commercial aircraft are not expected to descend if their pilots just walk way. At least, not quickly. Large planes generally cruise on autopilot, which will keep altitude until told otherwise. In fact, airliners generally have flight management computers that will fly the entire route before holding near the destination. When the plane runs out of fuel, it will slow down and then, finally, it will descend until it crashes. This was seen in Helios 522. I don't know what that descent profile would look like. 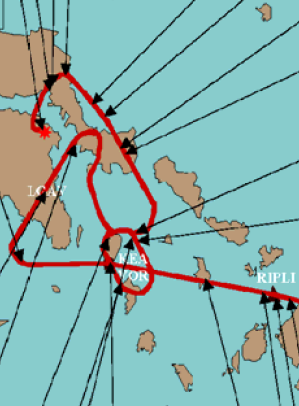 All certified airplanes are designed to have a (very slight) spiral instability. The opposite case, dutch roll instability is not acceptable. This will make a plane that is trimmed out straight and level and then left alone without pilot, autopilot wingleveler or other automation to slowly enter a spiral dive with gradually increasing bank angle and sink rate.

Spiral instability is achieved by having the lateral tail area large enough so when a wing drops slightly by external disturbance and the plane starts to slip in the wing low direction, the tail will turn the plane in the same direction as the wing drop. This is a gentle and harmonic movement, it feels natural to the pilot. If uncorrected it leads to a spiral dive at increased bank angle and speed.

Dutch roll is the result of to small tail area, so when the plane slips for instance to the left, the nose will go right and up. The speed will go down, and if uncorrected will lead to a stall.

It is not the case that a plane left unattended (no pilot or autopilot on duty) will largely stay on course and altitude until the fuel runs out. If a plane was stable by itself, flight in low visibilty would not be a problem.

One famous example is the John F. Kennedy Jr. accident.

Not the answer you're looking for? Browse other questions tagged navigation altitude or ask your own question.

43
Do pilots adjust the aircraft's flight path to allow for the curvature of the Earth?
4
What is the reason for the detour flight route from AUH to BEY?
6
What additional considerations do pilots have when deviating from the planned routing on flights dispatched under Method 2?
12
At what distance from magnetic north do pilots start referencing true north for heading?
2
What navigation systems were used by the Space Shuttle during reentry?
3
Is the transition altitude around Denali still 18 kft AMSL, and, if so, how is this handled?
3
What was the record for the highest man-made flight before Gagarin's spaceflight?
1
What was the normal flight path for a passenger aircraft from New York to Miami in 1955?