Is ATIS information - including identifier - available on the internet?

According to Section 2-9-1-a of the FAA's Air Traffic Organization Policy, a phonetic letter is assigned to each tower-issued ATIS update.

This information is available on the ATIS VHF frequency for an airport, or via a phone call to a designated ATIS number for the airport.

There is a passing reference on the Wikipedia page to ATIS being available electronically via a service named "D-ATIS", although I've never heard of this.

I'd love to be able to view this information electronically, rather than having to get my VHF handheld, or the plane's radio going and tune it in before flight. The voice system is frequently engaged. If it was available via the internet, it'd be super-easy to access.

Is there a means accessing the ATIS - including the identifier - for a given airport in electronic form via the internet? If so, how?

NOTE: I know it's possible to get METAR reports, but they are typically automatically generated, not manually adjusted by the tower (as ATIS sometimes is), and don't include the phonetic letter designation issued by the tower and required for initial tower contact.

The short and general answer is: No.

The ATIS is only a VHF recording, but even when recorded digitally, it is not available in a text-base form in many cases which would allow being made public on the internet. In the case of D-ATIS, the information can only be obtained using ACARS, other systems such as CPDLC require special equipment.

With modern technology and communication, some airports have started to use Twitter to broadcast ATIS, however they should not be used for flight purposes, but are only for entertainment. 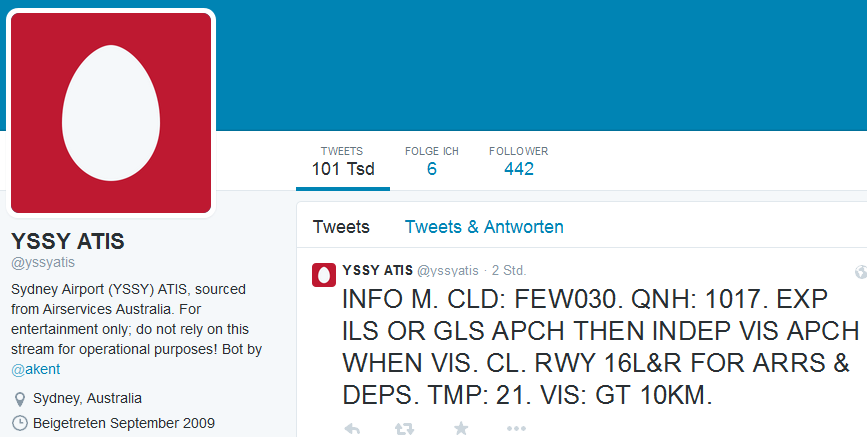 In Australia the full ATIS and identifier is available on the internet in text form (along with all the weather and NOTAMs) - but it is only available to pilots. The information is provided by Airservices Australia (which is basically our government-owned version of NATS) through their online service called NAIPS. NAIPS is free but to register you need an Aviation Reference Number issued by CASA, which are only available to pilots or engineers or other important people.

To illustrate, here is the ATIS from Sydney (YSSY) from a bit earlier today, they were using identifier K:

I dont know of a site that has it for every airport but this site has lots of live streaming ATC. It seems they have ATIS for some airports (I found it for JFK) but chances are they will only have it for the big airports however depending on where you fly out of you may get lucky. Again this is the actual audio feed so you will still need to listen to it.

In the US ATIS information isn't available on the internet. The tapes (or an equivalent written record) are retained like any other ATC communication though (3-4-2 item "k") and are available via FOIA requests if you have a pressing need for them.

If all you're interested in is the weather most airports that are large enough to warrant an ATIS broadcast are also large enough to have a weather station reporting METARs, which means you can use one of the many available METAR archive search websites (or if you prefer you can dig around on the NOAA website - I used to know the URL for the archive but it's apparently been moved).

Not the answer you're looking for? Browse other questions tagged usa atis or ask your own question.

24
Where did the "K" identifier prefix for US airports come from?
10
Do small airfields provide ATIS? If not, what weather reporting service is available?
7
Why do pilots need the ceiling, time, and dew point in the ATIS?
7
Why would METARs and ATIS both report exactly the same wind direction?
2
Is data on international air traffic volume in the US freely available?
2
How is a Class E airport distinguished from a Class G airport, based on the identifier?
2
What's the difference between ATIS and D-ATIS?
3
In an ATIS broadcast, is the visibility in statute or nautical miles?
4
What does the "BA/" stands for in this ATIS?
8
Why does the ATIS say "read back all instructions"?