Can planes still land during a regionally-diverse ATC malfunction?

Spoilers for the Pilot episode of Scorpion

In the Pilot episode for the TV series Scorpion, all major control towers in the greater LAX area are taken out because the firmware is malfunctioning and our heroes need to get a proper version active again, while the airborne planes could not be contacted through any method. They first try to recover a backup version of the software from a datacenter, but that fails. They then contact a salesman on a plane via his antique cellphone and manage to reload the software using a Ferrari and a laptop wired into the plane. One of the major plot points was that, because the software was malfunctioning, none of the planes could land safely, even though one of the planes could safely buzz the tower and even get close enough to the ground to make a wire connection to the ground. If they could fly so low, why can't they just land it?

So can a plane land during a complete control tower malfunction? And what is the general SOP in case of malfunctions? I've read both How realistic is the aviation crisis in the recent Spider-Man movie? and What happens to incoming flights when the airport shuts down, but part of the plot was that every airport in the greater LAX area got the problematic malware at the same time, so it's possible that many of those planes had their alternate destination airport also in trouble.

During a control tower malfunction, can planes still land?

If one tower goes down, the other layers of ATC will still be functioning, and they'll divert the aircraft elsewhere: if LAX goes down, national level ATC would work with the SoCal Tracon (Southern California Terminal Radar Approach Control -- i.e. "Approach") and perhaps the airline dispatchers to send the airplanes elsewhere: San Diego, Ontario, Long Beach, Burbank. Those farther out would be diverted elsewhere just to avoid having too many airplanes piled up in one place: land in the Bay Area, or LAS or PHX, for instance.

Okay, let's assume that all the towers in the LA Basin are all down. And let's assume that SoCal is down too. And just to make the scenario complete, we'll assume that LA Center has lost all of their radios too. (This is like the scenario that happened several months ago when Chicago Center lost their radios due to sabotage, except we're assuming LOTS of facilities all have the same problem at the same time. Straining the limits of "willing suspension of disbelief" pretty hard here, but let's do it to make the point.) What happens?

The pilots talk to each other on the usual frequencies and land.

There are plenty of uncontrolled airports out there, and they function just fine with pilots using what's known as CTAF -- the Common Traffic Advisory Frequency, where everybody broadcasts their position & intentions. "Whozit Traffic, Cessna 1234A, left base, touch & go Whozit." "Whozit Traffic, Piper 9876B, left downwind, full stop Whozit." Based on those transmissions, you can build a good picture of who's where, who's closest to me & where I need to be looking to find him, and what (if anything) I need to do differently to not get too close.

And nobody needs ANY assistance from the tower in order to put the aircraft safely on the runway, stop, and exit. We talk to them to keep the flow of traffic neat & orderly (they can be more efficient than just working it out on our own -- particularly when you start alternating departures with arrivals), but they have zero role in the actual act of landing.

Now in the scenario posited above where every ATC radio in all of the southern half of the state of California has failed, there would be complications, particularly if there was weather involved. (See Die Hard 2, where weather had shut down EVERY airport in North America, apparently, save one, and the bad guys had shut down the ILS to that airport... we're well beyond "willing suspension of disbelief" there.) But you'd also have a couple of things in your favor: no departures, and the runways normally used FOR departures would be available for landings as well. Also, the goal is no longer a smooth & efficient flow of aircraft in & out; it's simply to get everybody on the ground safely.

Would it be a mess once you got on the ground & wanted to get to a gate? Sure. Visions of gridlocked LAX are easy enough to imagine. But could everybody get on the ground safely? Absolutely.

Not all airport actually have a control tower, so it is very much possible to land without any tower assistance.

On major airports however it would likely become chaos in very short time. In order to be able to communicate to aircraft in case of a radio failure, ATC control towers are equipped with light guns. These bright focussed lights allow an Air Traffic Controller to communicate instructions to aircraft both on the ground and in flight. 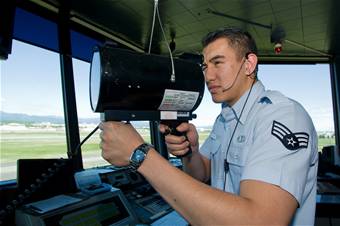 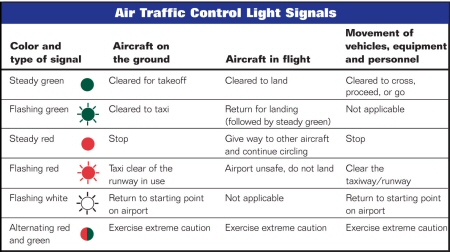 Yes it can(and that episode no matter how cool a show was full of simply non-accurate things). If your question is simply about a tower malfunction look for a minute at the fact that many airports (granted generally smaller ones) in this country do not have a control tower. They are thus called uncontrolled fields. You can find some nice guidance here on their procedures. Keep in mind these procedures are for uncontrolled fields there may be a different protocol for a large field losing its tower that I don't know about. On that note there are some fields that have towers that are not always operational be it seasonally or based on the hour of the day. In that event you can still land at the airport using uncontrolled procedures.

Now keeping that in mind there is an aircraft density issue at a place like LAX. Generally speaking uncontrolled fields are smaller and often less busy than a place like LAX so while it may not be "safe" there is nothing that would stop the planes from landing.

Not the answer you're looking for? Browse other questions tagged air-traffic-control emergency or ask your own question.

23
What happens to incoming flights when the airport shuts down?
5
How realistic is the aviation crisis in the recent Spider-Man movie?

11
Does ATC use mode S addresses to identify planes?
6
Can ATC terminate flight following AND approve (arbitrary) frequency change while still inside Class C airspace?
33
What did the controller say during my approach to land (audio clip)?
31
What does ATC do during "slow" times?
16
How can ATC distinguish planes that are stacked up in a holding pattern from each other?
0
Does ATC expect 250 KIAS during vectors for an instrument or visual approach?