Why do airlines follow these routes between Barcelona and Düsseldorf?

In the wake of GermanWings' terrible incident of flight 9525, I have noticed that the crash location is quite far from the shortest route connecting the two airports.

I then went on FlightRadar24's website and checked that this is the normal route for this flight (and that there is an alternate one that reaches equally far on the other side): 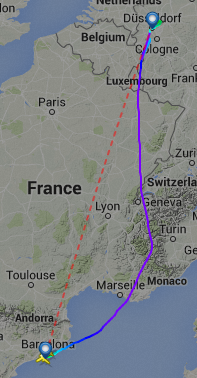 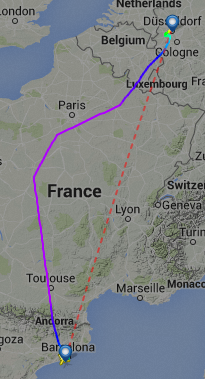 Why is this? What limitations are in place that prevent these aircraft from flying over Lyon (and "nearby" region)?

Large parts of France's airspace are designated military training areas. If there is military flight training going on, the choice of routing over France is very limited. The only option is to fly around these areas, which results in the routes you found.

Since the PDF seems to be giving problems on some computers, I've combined several screenshots and drew the approximate route of your westerly flight (in yellow), the planned flight of GWI 9525 (blue) and Temporary Segregated Airspaces (TSA's) in red onto the map. The crash location of GWI 9525 is marked by a red/yellow star. 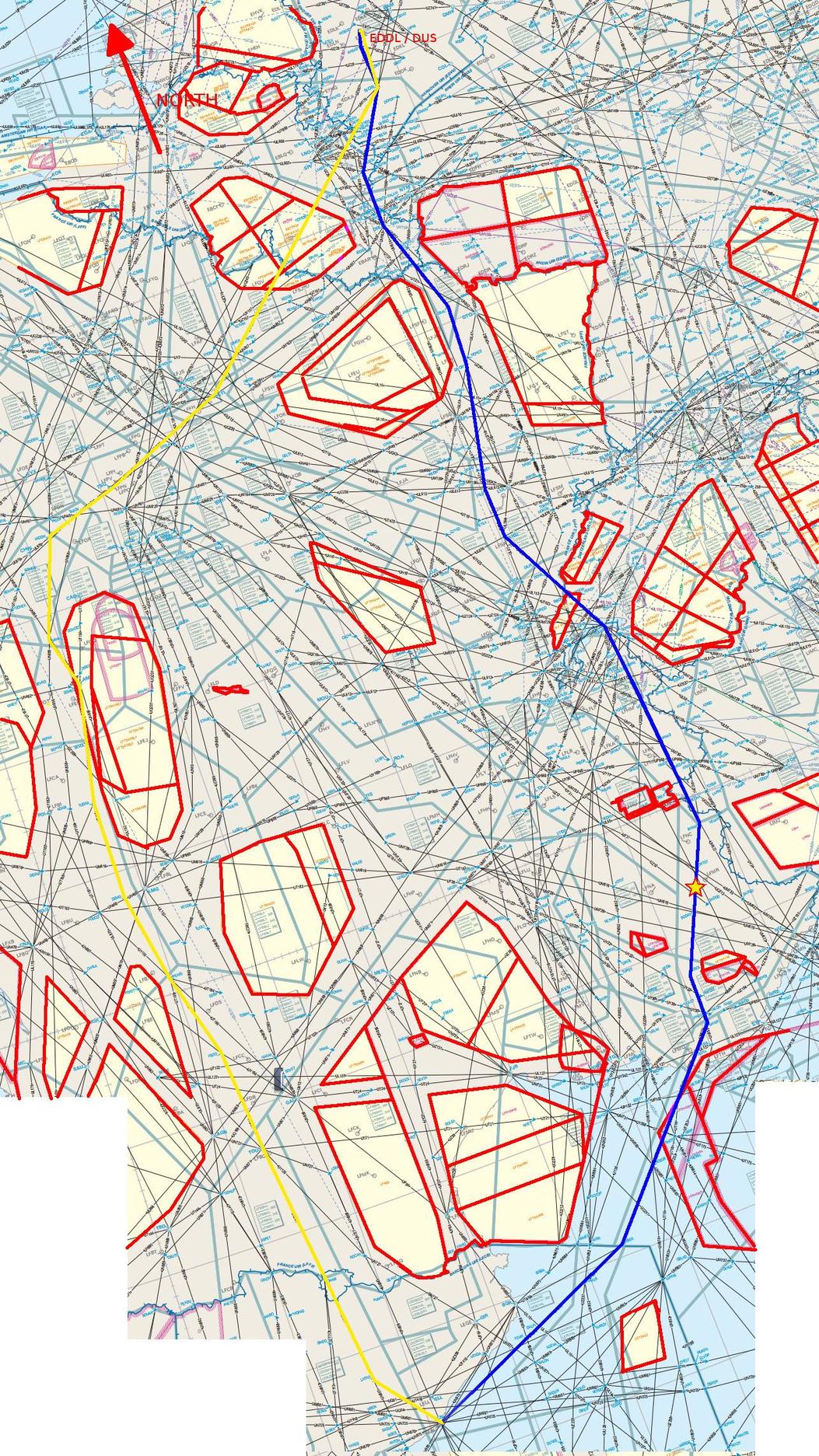 Note that not all the TSA's in the map are actively used at all times and that in some cases crossing is allowed but altitude restrictions apply.

In addition to active TSA's there are other considerations that come into play such as weather and airway capacity & demand. If you have to wait 15 minutes longer for a slot on the shortest route, you might as well fly a slightly longer route if that allows you to depart earlier.

While DeltaLima's answer is very good, it is also due to Air Traffic Control limitations-- you want to spread out where the traffic is across the whole airspace, so routes may dogleg left or right at one point to try to keep traffic flow good (also helps separate aircraft going in opposite directions, but altitude does that too).

Keep in mind that the arrival patterns into certain airports have defined entry points and are designed to line up the plane in a certain way for the airport, and flights may have to go slightly out of their way to join the arrival.

30
Why would a flight from Frankfurt to Madrid fly over London?
9
Why do some flights make turns shortly after takeoff?
4
How can an ATC choose the right flight level and heading for airplanes?
9
Why doesn't EVA Air BR087 (Taipei to Paris) follow the shortest path?
1
Why do airlines not use direct routes?
3
Why is the flight path from Taipei to Tianjin not a straight line?
2
Why do commercial flights avoid overflying Shandong Province?
2
How is the length of a leg calculated?
2
Why flights route is so different?

12
Why are different routes flown between the the same pair of airports?
8
Are there any widely applicable models for plausible aircraft auto-routing?
7
What's the difference between Free-Flight and Free-Route?
5
Is it economically viable for Emirates to use a 777 for some of these routes?
23
Why are westbound transatlantic routes located hundreds of km away from eastbound routes?
3
How to find past flight routes between 1977/82 Latin America and the former Soviet Union?
4
How are airline pilots assigned routes? Are there easy and tough ones?
1
Why do airlines not use direct routes?
30
Why does Turkish Airlines avoid Israel when going to Amman, but not on the return leg?
0
What is the difference between company routes and pilot routes?