How can the pilot tell the center engine failed on a piston aircraft with three engines?

There are a few aircraft, such as the Britten-Norman Trislander, that use three piston engines -- one on each wing and one mounted along the centerline somewhere.

This is fine and good, but how do you tell in a timely fashion that the #2 (centerline) engine has quit? The engine gauges are in no hurry to tell you, as per Randy Sohn's Warbird Notes #6, and there's no adverse yaw because it's a centerline-mounted engine, but you still need to know and quick because unless you can get that prop feathered, there's a giant drag bucket hanging off your vertical tail!

If the engine quits you will lose some thrust which will affect the plane's handling. You may even begin to descend slowly which the pilot will notice.

Most importantly you have engine instruments which will tell you, quite quickly, the engine has quit. If you have one, your manifold pressure will drop since you are no longer producing power, or your tach will reflect what is happening.

If all that fails you I would think there would be an audible difference if the engine cut out.

This is the cockpit of the aircraft in question: 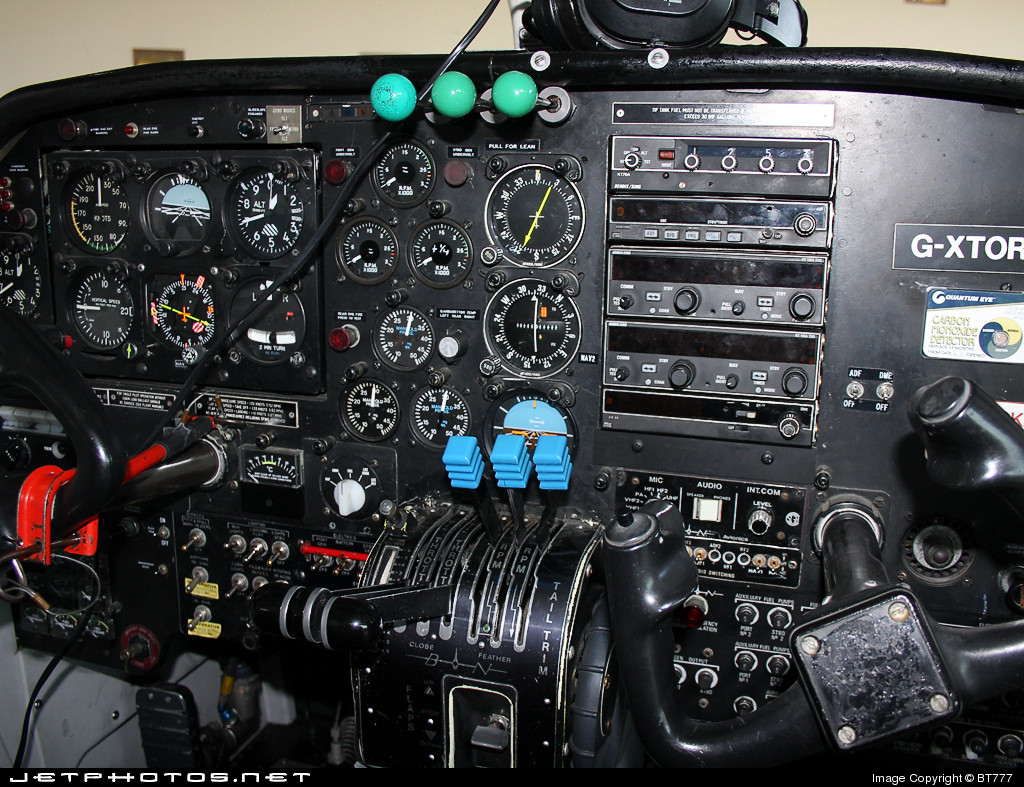 It does show independent MAP and RPM gauges for each engine as opposed to some planes that have a single gauge with multiple hands (one for each engine). You would surely be able to see an altered reading on one of these gauges.

Without having flown this particular aircraft:

According to Wikipedia, the aircraft is powered by the, non-turbocharged, Lycoming O-540-E4C5. This means that in a climb for instance, where you'd likely be at full throttle with this engine, if an engine stops (seizes), its indicated Manifold Pressure (MP) will be near ambient pressure, just like the other, running engines will be (at least for practical purposes), if it windmills, the engine will still work as a vacuum pump out of the throttle manifold, maintaining a still reasonable MP-setting. As the propeller will be windmilling initially, RPM is likely to, at least initially, stay in the same ballpark as the other engines (anyone who's flown older light piston aircraft will tell you most engine instruments are not accurate enough to make exact comparisons by value between the engines, try for instance syncing the propellers by the RPM gauge, and not by your ears). Unless the aircraft is equipped with torque indicators (not likely), the first instrument you will clearly be able to identify the engine failure is likely going to be the Exhaust Gas Temperature (EGT, an instrument I'm not sure if this aircraft is equipped with).

In a climb, or high powered cruise, the aerodynamic/kinesthetic feedback of the aircraft will be significant enough if you lose 1 of 3 engines, (deceleration, loss of climb performance, torque, change in sound) to warrant further investigation (and with proper training/experience, rather quickly conclude an engine failure). In a low powered descent, an engine failure can be quite insidious even on a light twin, and you are actually not likely to detect it until you apply power to level out.

Not the answer you're looking for? Browse other questions tagged piston-engine engine-failure or ask your own question.