Why do helicopter flights not appear in online flight trackers?

Currently in Indianapolis, IN (19 Mar 2015, ~08:00 EDT -4GMT), there is some sort of big kerfuffle downtown, and I can see 3 helicopters hovering over the near west-side of the downtown area. However, FlightRadar24 for the area doesn't seem to show them at all.

It's dim enough that I couldn't make out the markings on the choppers before I went inside, but at least one or two are local news stations, and the third is either another news station or a police chopper. They are in the (normal) flight path of Indianapolis International (KIND) runways 23L and 23R, though I'm sure they're below the approach altitudes.

Why are they not squawking something that would be picked up on either FlightRadar24, FlightAware or similar flight tracking web sites?

Update: It does appear that they're not using RWY 23 this morning, but are using RWY 5L and 5R.

FlightRadar and similar websites use several sources for aircraft detection, most commonly they use ADS-B. Not all General Aviation aircraft, to which helicopters would count normally, are equipped with transponders that are capable of emitting ADS-B data, so they would not show via regular means on FlightRadar.

The primary technology that Flightradar24 use to receive flight information is called automatic dependent surveillance-broadcast (ADS-B).

ADS-B is a relatively new technology under development which means that today it's rarely used by Air Traffic Control (ATC). Our estimations show that roughly 65% of all commercial passenger aircraft (75% in Europe, 35% in the US) are equipped with an ADS-B transponder. For general aviation this number is probably below 20%. But this percentage is steadily increasing as ADS-B will become mandatory for most aircraft in most airspaces around the world, by year 2020. When mandatory, ADS-B will replace primary radar as the primary surveillance method used by ATC.

Flightradar24 has a network of more than 4,000 ADS-B receivers around the world that receives plane and flight information from aircraft with ADS-B transponders and sends this information to our servers. Due to the high frequency used (1090 MHz) the coverage from each receiver is limited to about 250-400 km (150-250 miles) in all directions depending on location. The farther away from the receiver an aircraft is flying, the higher it must fly to be covered by the receiver. The distance limit makes it very hard to get ADS-B coverage over oceans.

About 99% of Europe is covered with ADS-B receivers. There is also good ADS-B coverage in USA, Canada, Mexico, Caribbean, Brazil, Russia, Middle East, India, Japan, Thailand, Malaysia, Indonesia, Australia and New Zealand. In other parts of the world the ADS-B coverage varies.

The other option is to receive the regular Mode-S transponder signal by a technique called Multilateration (MLAT), however the FlightRadar website states that this is something that only works reliably at high altitude, at least 5 000 to 10 000 ft.

In some regions with coverage from several FR24-receivers we also calculate positions of non-ADS-B equipped aircraft with the help of Multilateration (MLAT), by using a method known as Time Difference of Arrival (TDOA). By measuring the difference in time to receive the signal from aircraft with an older ModeS-transponder, it's possible to calculate the position of these aircraft. Four FR24-receivers or more, receiving signals from the same aircraft, are needed to make MLAT work. That means that MLAT coverage can only be achieved above about 5,000-10,000 feet as the probability that signal can be received by four or more receivers increases with increased altitude.

Most parts of Europe are today covered with MLAT above about 5,000-10,000 feet. There is also some MLAT coverage in North America, Mexico, Australia and Brazil. More areas will get MLAT coverage during 2014 and 2015.

For more information, check FlightRadar's "How it works" page.

From the ADS-B Wikipedia page: 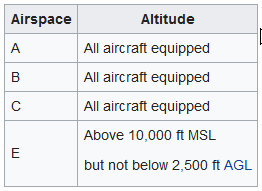 So it certainly seem that you will soon see more helicopters using this. I would assume because of the recent explosion of drones, that some modifications to these rules will come to include them as well.

One additional point on police, coast guard, and air ambulance helicopters. They don't transmit location on ADS, just call sign. I went out to the waterfront when the Guard was doing a search for a boater after the boat he was on missed the opening in the break wall. I could see the helicopter less than a mile away and my setup that picks up planes 200nm away was telling me his call sign on 1090. I know they are up because I flag their calls, but that is all I see.

Regular tourist helicopters are completely visible. I see them flying the proscribed route for particular attractions all of the time.

16
What callsign would a medical emergency flight use?
4
Can you track drones online?
1
Is there a way to see the radar info ATC has?

31
Why do aircraft on Flight Radar 24 jump around randomly sometimes?
3
Why there is no online radar coverage of Madagascar?
7
Why did the Flightaware groundspeed readout suddenly spike for this flight?
4
How to completely track a plane, not a flight?
14
Why would FlightAware show this meandering flight path?
9
Why doesn't flightradar show many flights going over China?
4
Why is this Jordan–Afghanistan flight avoiding airspaces in the Middle East despite being used by other flights?
0
Why do some military flight appear on Flightradar but some not?