May an emergency aircraft land on a closed runway?

Let's say that you're on approach to a remote airport to refuel (for arguments sake, Funafuti International Airport, Tuvalu), with 1-2 hours of fuel remaining in your aircraft. Contacting ATC to request permission to land, they tell you that the only runway is closed for an unspecified reason and will not reopen for ~2 hours.

The nearest airport is 295nm away, so you agree to hold, hoping the runway is soon reopened. After waiting a little while, the runway is still not reopened, so you declare an emergency.

Is the airport required to reopen the runway? Does the fact that the nation is not a part of The Chicago Convention change anything?*

Let's presume the aircraft is not certified for ditching.

Searching Google, I found that at least one emergency aircraft has landed on a closed runway.

Let's say that you're on approach to a remote airport to refuel, with 1-2 hours of fuel remaining in your aircraft. ...

The nearest airport is 3-4 hours away...

First of all, it looks as if the pilot has already broken several regulations in order to end up in this situation. He either didn't file an alternate, or if he did then he didn't carry enough fuel to get to it (and additional reserves as required). If the runway is closed for an extended period of time, there would likely have been a NOTAM stating that the runway would be closed. All of this sounds like poor preflight planning, and probably the 'ole careless and reckless thrown in for good measure.

Contacting ATC to request permission to land, they tell you that the only runway is closed for an unspecified reason and will not reopen for ~2 hours.

Okay, we need to figure out what the "unspecified reason" is because this can change things dramatically. 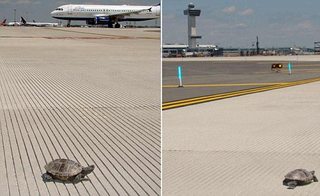 Is it for endangered migrating turtles? 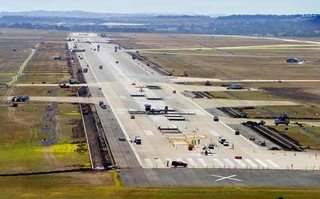 Is it for construction?

In any case, he needs to use all available resources. Talk to ATC and explain the situation. Ask them how they can help clear the runway so that we can land. He should tell them that an emergency is imminent without their assistance. They will do everything that they can to help you, including coordinating with people on the ground to get out of the way. Be creative. Did you know that there is no regulation (in the US) requiring you to land on an actual runway? Ask them if you can land on the taxiway. For that matter, land in the grass beside the runway. It would be better than going for a swim or crashing after running out of gas!

Let's presume the airport is surrounded by ocean, and the aircraft is not certified for ditching.

Well, they wouldn't really do this unless there was a really good reason, mainly meaning that it would be dangerous for the aircraft to land there (like in the second picture above). In this case, we can't really ignore ATC and land anyway until:

At least our poor pilot did this right. Rather than blindly continuing to hold, he declared an emergency.

Getting on the Ground

Now we have a lot more latitude and options, and ATC is better able to help us because they can pretty much do whatever it takes to save the aircraft. This can change a "Sorry, there is nothing I can do." into a "Cleared to land any runway or taxiway." all on its own. They may throw in a "Landing at your own risk." if there are still hazards, but that's just to clear them of liability. Even if they still refuse, you can simply advise them of what you will be doing and go ahead and do it. Keep in mind however, that it may be better to scope out an off-airport landing site if the danger is so great that ATC won't allow you to land even under such dire circumstances.

Remember, the pilot is the final authority for safe operation of the aircraft. Get on the ground and sort it out after the fact. (Poor turtles....)

In the end, just do what you can to stay alive, and preferably use the airplane again. There are going to be tons of questions and probably major legal battles. Someone will probably go after the pilot's certificate. On the bright side, he will be around to actually see it happen though.

There is plenty of room between the request to land, and declaring an emergency to sort things out. After all, if the runway is closed, the tower isn't too busy. It would probably go something like this:

Pilot: Foobar approach, we are having some technical difficulties, please advise, what is the nature of the closure of runway 12? N12345.

Tower: N12345 Threshold is being painted.

Pilot: Yeah, approach, we may have a faulty gauge, we are showing a faster fuel burn than expected, we'd like to get on the ground and take a closer look, we can land a little long.

The pilot is then obligated to buy a box of donuts for the tower, and thank the tower and the ground crew. He may get a warning, but equipment failures do happen, and they aren't always an emergency.

Everybody makes mistakes. Aviation is as much an art as a science. So while the rules are important, they are only religion to the lawyers, and only then after something goes horribly wrong. To the people who actually work in aviation, it is about safety, and professionalism, and being good at what you do. And that requires a certain amount of flexibility.

If you already declared an emergency all bets are off, and you must do whatever is required to save the vehicle. There can be no talk about being 'permitted' or even 'cleared' to land if an emergency has been declared.

The pilot-in-command of an aircraft shall, whether manipulating the controls or not, be responsible for the operation of the aircraft in accordance with the rules of the air, except that the pilot-in-command may depart from these rules in circumstances that render such departure absolutely necessary in the interests of safety.

Faced with bad weather, some icing, and an aircraft with a collapsed gear on the runway, I landed on the taxiway.

The matter was complicated in that ATC was unaware of the runway closure. This was at night, in the winter, and the airport owner / manager fired up his equipment to light up the incident area, and did not file a NOTAM until after I was on the ground. I found out when I was five miles out on the approach and made a call on the CTAF. I asked if the taxiway was plowed and free of equipment and personnel and was told it was, and announced my intentions. The airport manager acknowledged on the CTAF.

The FAA FSDO Inspector arrived as I did. Before we left, he came over and talked with me, and I mentioned that ATC was unaware of the incident. Nothing was said adverse to landing on the taxiway.

From my perspective, that option had less risk then doing a missed, and getting back up into the ice. With a light load already on the plane, it would have been hard to get above the icing layer.

Well, the runway closure would be NOTAM'd. I have no idea what the deal is in other countries, but in the US, per 14 CFR Part 91.3 "any pilot may deviate from any rule in this part to the extent of the emergency" or something similar. I would guess it's the same deal in other places. And if ATC is aware of it OR it is for the safety of those on board the aircraft, the FAA will not mind.

Not the answer you're looking for? Browse other questions tagged air-traffic-control emergency-procedures icao closed-runways or ask your own question.

19
What is the procedure when an aircraft with an emergency can't land due to a blocked runway?
2
What to do when fuel is exhausted and we are denied landing by ATC?
6
Is there any combination of aircraft and airports where no alternate landing airport would be possible?

7
What does STERILE RUNWAY mean?
6
Does a runway have to be closed for not having markings due to resealing work?
13
How are landing aircraft handled during an emergency runway closure?
8
Is Iqaluit Airport closed?
19
What is the procedure when an aircraft with an emergency can't land due to a blocked runway?
20
Why does ATC ask emergency aircraft about fuel on board?
3
Should landing on a runway that has been closed by NOTAM be a violation of the FARs?
8
Can a runway have a displaced threshold and a closed section in the same area?
18
May the tower use the runway while an emergency aircraft is inbound?
3
Close Runway 16/34 from one direction