What are the pros and cons of a pulsejet?

I've heard pulsejet powered aircraft can fly at very fast speeds but are there any drawbacks to this type of engine? And are the disadvantages greater than the advantages or vice versa?

The pulse jet engine works because it uses the dynamic pressure of air for compression. Consequently, it needs speed to work well. If the pulse jet is on the ground, it is not easy to start - it needs to be fed with compressed air, and once it runs (it can run even when not moving because the oscillating pressure wave inside the tube will compress the inflowing air), it develops litte thrust.

Thrust will go up with airspeed, so you need additional thrust sources for initial acceleration and take-off. In case of the V-1, this was done by a steam catapult or by air-launching the device. Note that the V-1 was accelerated to 370 km/h on a 45 m long catapult which means more than 100 m/s² (10g) average acceleration. Most of the development work went into making the airframe withstand this acceleration. A modern design would need additional engines as well, and once those are included, the rationale for pulse jets becomes very weak. They make sense if you have an air-launched, disposable application, such as long-range air-to-air missiles. This is a niche in which their higher-speed cousins, the ramjets, will still be used.

NACA tested the As 014 pulse jet and wrote a report, from which the performance data depicted below is taken: 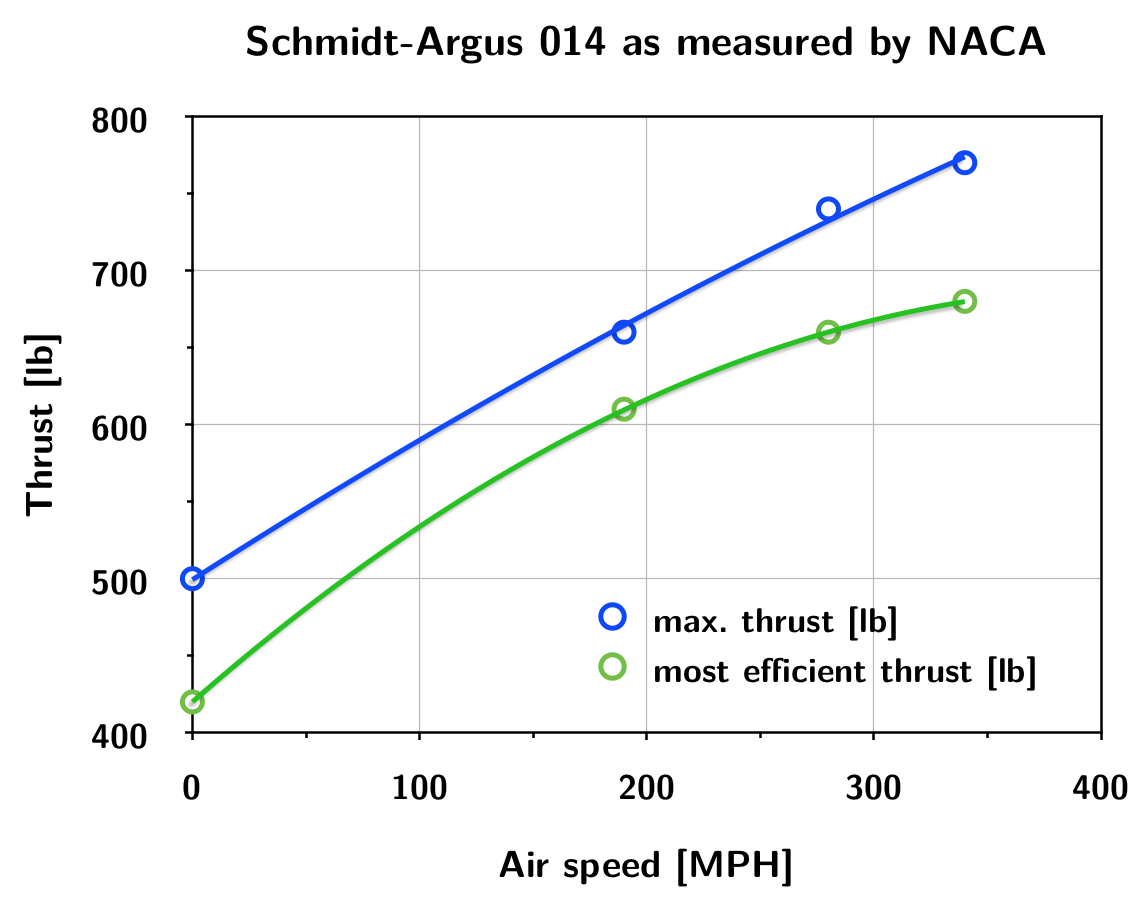 It seems that Bruce Simpson over in New Zealand has improved the pulse jet design a lot: He needs no compressed air for starting and makes clever use of surrounding cold air to increase mass flow and keep material temperatures down.

First of all they are loud there is a reason that the V1 bomb is called the "buzz bomb".

They are also fuel hungry due to the low compression ratio.

The biggest advantage it that they are very simple. Once you have them ignited they will continue to burn until they run out of fuel or the airflow is disturbed.

Pulse jets were big during WWII but the have a few issues.

Aside from throttle flaps pulse jets have essentially no moving parts which makes them not only simple to build but simple to maintain. People build them in their garages at home all the time. From a war time standpoint this was great since you could make many of them in a short time.

Noise: Pulse jets are much louder than their spinning counterparts. This makes them some what less useful from a stealth/wartime standpoint and from a commercial standpoint in regards to general noise pollution concerns.

Low Impulse: From my understanding of them pulse jets have a low specific impulse due to their more piston like ignition pattern. They don't deliver the kind of thrust their fan like counterparts can.

Size: If memory serves they are also much bigger than a regular jet (for a given power output).

One other advantage of pulse jets is: they are dirt cheap to build, as compared to other forms of aircraft engine. A primary reason they were used in the V1 was their very low cost.

One other disadvantage: they really have only one efficient power output: their maximum. While this does vary with airspeed, it also means that pulse jets can't really be throttled down without risking a flameout. That would make landing a pulse jet aircraft a challenging affair.

Since the V1 was never designed to make a controlled landing with a pilot on board, that wasn't an issue.

Not the answer you're looking for? Browse other questions tagged jet-engine pulsejet or ask your own question.

12
Can a pulse jet be used on a light GA aircraft?
9
How big can a pulsejet be?
5
Is a subsonic scram-jet reasonable?
0
Can thrust be produced only using the forward speed of a nozzle?

24
In what way are the Concorde's engines considered efficient?
15
What are the differences between pre-transistor and transistor era jet engines?
29
Are the fastest moving pieces of a jet engine supersonic?
14
Why don't planes use pulsejets?
5
What are the limitations of using a single shaft between the compressor and turbine in a jet engine?
5
Is hypersonic flight possible with a Busemann's Biplane?
12
Are centrifugal turbojets easier to make than axial ones?
3
Is it better to have the engines center or apart on a plane?