What is the proper procedure to change altitude when changing heading?

I'm told that, depending on the heading of your aircraft, you have to fly at particular altitudes. Which, of course, makes sense because having planes flying in opposite directions at the same altitude is just asking for a mid-air collision.

My question is this though: What about when you are changing your heading? Pretend, for example, that for some reason you need to go the exact opposite direction (so, we were going due west, but now we are going due east, for example.) I know you have to gain or lose 1000ft. But do you change altitude after the heading change, before, or during?

So: What's the proper procedure for changing altitude when you change headings?

Do you change altitude after the heading change, before, or during?

What's the proper procedure for changing altitude when you change headings?

You do not change altitude or flight level on your own when flying IFR. When flying VFR, you should adhere to the semi-circular rules when changing your direction and end up in one of the semi-circular areas. On turn techniques that allow direction change and altitude change at the same time, see Tyler's answer.

Is this made more complicated if you are flying Visual Flight Rules instead of Instrument Flight Rules?

The rule you are talking about is the semi-circular flight level rules, which depending on the country, can either be applied West to East or North to South. Let's assume the example you have already used and differentiate between westbound and eastbound flights.

Imagine you have a flight going westbound and you have requested FL280 as your cruise level. You would maintain this flight level until you are cleared to descend by ATC. Even if a portion of the descent or arrival route leads in the opposite direction of your orignal track, it will be ATC who is responsible to assign the correct desend flight level, but these do not have to be necessarily following the semi-ciruclar flight level rules.

There is one scenarion where a pilot may want to initiate a flight level change due to changing jurisdiction and use of the semi-circular flight level rules, which is when crossing borders between countries that use west-east and north-south rules. If are on a westbound flight (approx track: 200° that requires even flightlevels, such as FL280 and cross the FIR border into a country with north-south rules that require an odd flight level, you would have a step climb or descent in your flightplan to accomodate this, e.g.:

It would still be ATC who clears you to climb to FL290 at that fix, but this way your flightplan is in accordance to local semi-circular flight level rules. Remember that when flying IFR, you never change the altitude or flightlevel unless you have been instructed or cleared to do so.

The same semi-circular flight level rules apply to VFR, just with the added 500ft to stay clear of the IFR flight levels. In most cases however, VFR does not entirely follow these rules, as the are VFR and their separation is based on visual identification and the see-and-avoid principle.

I am not familiar with airspace class B procedures, but in class C airspace, you require permissions to enter the airspace and will thus be assigned restrictions, which can be either a single altitude or flight level, an upper or lower restriction or a level or altitude band. If you are assigned either of the two latter options, you could apply the semi-circular flight level rules.

See below on an overview how other countries handle these semi-circular rules. 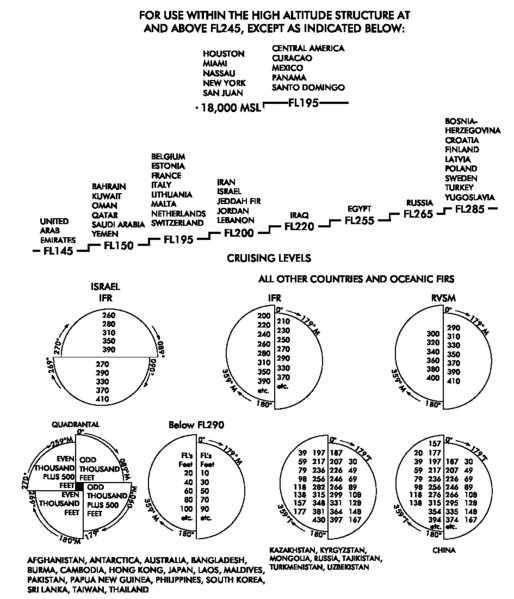 (Image Source: Delta Virtual Airlines - Not for real navigational use)

See also these related questions:
What is the difference between “flight level” and “altitude”?
What differences are there in Flight Level rules, internationally?

This answer is somewhat US-based so details may vary but I think the principles are the same everywhere.

Under VFR there's no specific procedure because you're maneuvering at your own discretion and maintaining your own separation from other aircraft visually. Even if there was a specific procedure - let's say it's climb first, then turn - what would you do if that procedure took you straight through a cloud? Or into airspace that requires a clearance? There are far too many possible variables, so it's always left up to the pilot to determine the safest path of flight under VFR.

Under IFR you usually only make heading and altitude changes as instructed by ATC, meaning the issue doesn't arise, with (at least) two exceptions. First, you may be operating VFR-on-top but in that case you're effectively operating VFR and the previous remarks apply. Second, you may be on a cruise or block clearance and then you can climb and descend as you want anyway (with some restrictions).

As for class B and C airspace, in theory the cruising altitude rules apply everywhere above 3000'agl (in the US) but in those airspaces you're required to be in contact with ATC and their instructions will take precedence anyway.

In general, you can turn faster than you can change altitude, so normally you would first make the turn and then focus on climbing or descending to the target altitude.

Note that you can perform a climbing turn or descending turn, but usually you still have to continue adjusting altitude after the turn is complete. Sometimes you can make a climbing turn which ends up exactly 500 feet higher, so you are right on target. In that case both objectives are achieved simultaneously.

The answer is the same for both IFR and VFR and the type of airspace. When a controller gives an aircraft a new vector they do not tell the pilot how to execute the turn (other than sometimes specifying the direction left or right). For example, the controller might say:

Not the answer you're looking for? Browse other questions tagged navigation flight-planning or ask your own question.

38
What is the difference between “flight level” and “altitude”?
19
What is the purpose of VFR-on-top?
6
How do I determine odd or even when working with altitudes?
13
Where can I find regulations in different countries for flight level rules based on direction of flight?

8
Do autopilot headings consider the earth's shape?
3
What is the primary means of IFR navigation for private pilots?
13
Why might a passenger jet fly at altitudes in a strong headwind when the winds are more favorable at a different altitude?
8
How do you calculate the true bearing from a station (QTE)?
3
Do GA aircraft pilots use predefined routes (via GPS or DME/VOR vectoring) or methods such as GPS-direct/ VOR-to-VOR in UC airspace?
10
What is the english term for “vol en ficelle”?
4
Having trouble reading some charts (SBMG-SBLO)
2
When not cleared straight in for a VOR approach, how is this type of procedure executed?
8
Can you change airways when they cross without a named fix?