I've been denied VFR clearance through C airspace, what should I do?

If I'm flying along in my C-152 and I am trying to go in a straight line through the "center" of C airspace (to land at a regional airport under the airspace), but the controller tells me to remain clear, what should I do?

Would it be safe to fly under the C, or above it, or would it be best to completely circle around even if it takes extra time and fuel?

If I'm flying along in my C-152 and I am trying to go in a straight line through the "center" of C airspace, but the controller tells me to remain clear, what should I do?

Well, the obvious answer is remain clear of the Class C airspace :-)

HOW you remain clear is entirely up to you - you can go over, under, or around - you just can't go through, and I think that's the more interesting part of your question.

Flying around the class C airspace is usually a safe choice (don't skim along the margins though - give it some reasonable breathing room), but as you've noted it could add a lot of time/fuel. You need to balance that with the time/fuel required to climb above the airspace, or the risks of flying under the airspace (mainly obstacles) to make your decision.

I'm going to use my local class C airspace as an example for an exercise in aeronautical decision making because conveniently there's a VOR you could hypothetically be circling while talking to approach, and an airport on the other side you might want to get to.

In our hypothetical example let's say you're circling Deer Park VOR (A) at 2500 feet, and you want to cut through the Class C airspace to get to Brookhaven (B), but approach isn't cooperating. 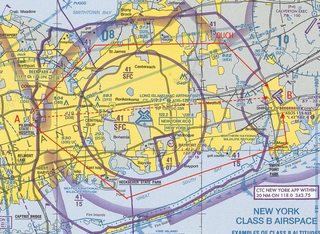 I've got three options sketched out here - think about them, then hover over the spoiler boxes for my thinking on each of the three routes:

When the controller tells you to "remain clear" it simply means that he is too busy to help you out at the moment. Traffic situations change quickly though, so I would recommend taking the most direct route that you can while remaining outside of his airspace and when things sound like they have quieted down a little, give him another try. If it isn't feasible (you are landing at the primary airport, or you need to enter it to get to the other airport) then you can circle until things calm down for the controller.

Since the airport that you are wanting to land at is under the Class C airspace anyway, probably the best way would be to go ahead and descend a little earlier than you had planned and fly under the shelf. Assuming that you have sufficient terrain clearance it would probably be better than flying over the top since you have to go down there anyway. That being said, there's no reason not to fly over the top if it's more convenient!

Just be sure that you don't accidentally fly into his airspace without a clearance and you should be fine!

As indicated in the other answers, "remain clear" means just that, and can happen when congested (as already indicated by @Lnafziger).

One approach that I take in the Bay Area to have a greater chance of getting into Oakland's Class C or SFO's Class B is to get a squawk code (with a flight following request) from another facility first, then get handed over. That way, it's just a matter of a frequency change and a hand-over. E.g. "N12345Z on frequency at 2000".

Not the answer you're looking for? Browse other questions tagged air-traffic-control visual-flight-rules or ask your own question.

17
May I enter Class C airspace if I'm told "remain VFR"?
6
Why was this helicopter denied entry to Class B airspace?

6
Why was this helicopter denied entry to Class B airspace?
5
Who controls VFR flights in class B airspace in Europe?
11
How would ATC try to establish contact with a VFR craft?
24
May a non-instrument pilot legally file IFR as long as he amends and doesn’t accept an instrument clearance?
5
Who to contact when inbound to adjoining class deltas?
10
How can I legally land VFR in class D airspace with low and few clouds?
3
How can I plan a VFR flight through controlled airspace, without knowing what instructions ATC will give me?
5
How do I obtain permission to fly in surface class E airspace under FAR-103?
20
Is there a minimum density a cloud must attain before it is, legally speaking, a cloud?