What is Vg in this VG diagram?

Can you tell me what Vg is, where it's officially defined, and how it's calculated? 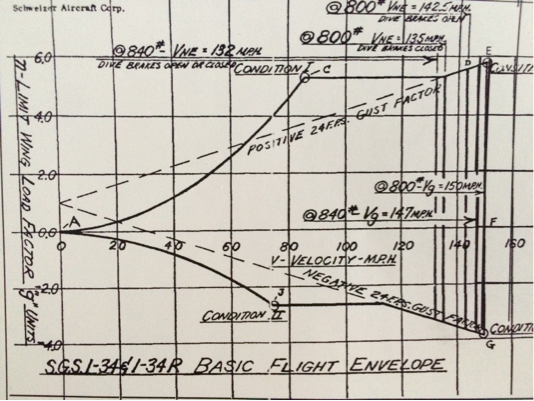 It is the maximum speed in gusty weather. Aircraft designers and certification authorities make assumptions about the maximum vertical gust an aircraft will encounter and design the strength of the wing spar for it. Here 24 feet per second are assumed.

Depending on the mass of all parts not creating lift (fuselage, vertical tail, pilots, equipment ...) the load on the wing spar varies with the aircraft mass. For that reason, lighter aircraft can afford to enter a gust at a slightly higher speed. Here, the 800 lbs glider may fly up to 150 MPH, while the 40 lbs heavier glider should stay below 147 MPH to suffer the same wing spar bending loads when flying into this 24 fps gust.

The maximum flight speed in gusty weather v$_g$ is a limit speed just like v$_{NE}$, but applies only in specific weather conditions (admittedly those which are most suitable for glider flying). While v$_{NE}$ might be determined by a minimum flutter margin, a formula in the certification requirements or structural loads in maneuvers, v$_g$ is determined by the maximum load factor the aircraft can tolerate.

6
How does an aircraft's weight affect the V-n diagram?

10
How is the area rule applied on airliners like the A380?
15
Why do most commercial airplanes use hydraulics instead of electric/servo motors?
11
About climb: If we use T/W as input, the second grade equation yields two solutions for W/S. Are both solutions realistic?
3
How to maximize your practical lift/weight ratio in a multirotor?
8
What is the difference between Assumed Temperature and Derate takeoff thrust?
5
What's the relationship between drag divergence Mach number and maximum operating limit Mach number?
2
What is the wing span in aspect ratio's calculation?
1
Equations for Computing Temperature and Air Density Ratios at Different Altitudes