I have referred to standard author books and online tutorials but I am still quite confused about how the Stall and Throttle characteristics lead to Surge.

1. Why and how does the throttle characteristic affect the compressor performance because as far as i know, the next consecutive element in an engine after a Compressor is a Combustor, and the throttle comes at last,after combustor and turbine, assuming throttle is same as nozzle (if not please correct me).

Assume i am talking about turbojet engines and Axial compressor, just to have a picture in mind.

2. How does the throttle characteristic curves come out to be like that?

And why does the mass flow decrease when we throttle the compressor?

3. I am also unable to grasp the concept which causes the evil fluctuations in the flow during surge, which leads to reverse flow and damage of the components. 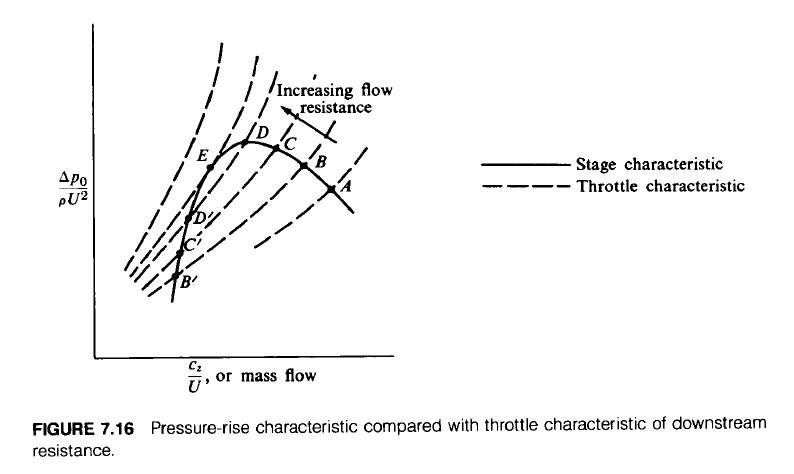 Someone please explain the concepts as much as possible.

Since your question is divided in three parts, I do the same with my answer. First, however, we need to explain what the axes of the graph mean. The x-axis plots mass flow through the compressor, which is roughly equivalent to the tip speed of the compressor blades, and the y-axis shows the pressure ratio between entry and exit flow.

The throttle regulates fuel flow, and this flow has to match the air flow. The limits are:

If it is kept within those limits, the throttle will indirectly control the compressor speed and it's mass flow. More fuel flow will translate into higher turbine entry speeds, which will increase the torque produced by the turbine and speed it up. Since it is directly coupled with the compressor, it will see the same speed increase. This leads to higher mass flow and a lower fuel-to-air ratio in the combustor (relative to the state right after the throttle increase), such that a new equilibrium at a higher speed is established.

For every pressure ratio the compressor will have a matching mass flow, and both move up and down in parallel. This is shown by the dashed lines. Depending on the blockage of flow in the turbine and the engine nozzle, different lines are shown for different grades of blockage. The solid stage characteristic line shows the limits within which the compressor will run, and a higher flow resistance narrows the range of speeds that are possible. The limits are determined by:

Once the pressure rise per stage cannot be maintained (say, due to a stall of the flow over the compressor vanes), the high pressure air in the combustor will find it easier to escape at the front than to flow through the turbine and the nozzle. This leads to reverse flow and a sudden drop in combustor pressure, which in turn allows the compressor to reverse the flow and start pumping air back again. Now the pressure in the combustor rises again, until the whole process repeats.

Not the answer you're looking for? Browse other questions tagged aircraft-performance jet-engine or ask your own question.

8
Why does the MiG 21 use anti surge shutters?