What is the best way to give ATC a position report using only a VOR (no DME or GPS)?

Obviously, during VMC, you have your pick of visual checkpoints, but in IMC, are there any better suggestions?

Additionally, if you are near a navaid or published intersection, and take a guess at your distance from it, how far off would your guess have to be before ATC wouldn't really even consider it helpful?

I'm going on the assumption you're operating in IMC (or perhaps VMC above a cloud deck) and have no reference to the ground. In a situation if you need a pop-up IFR clearance or ATC is requiring you to provide position reports for some other reason (non-radar, or your transponder is dead and they want to identify you but don't have time to issue you confidence maneuvers).
I'm going to further constrain the scenario with the assumption that all you have are "basic" IFR instruments (6-pack, clock, compass, and VOR -- no VFR/Handheld GPS, DME, or other fancy stuff).

The AIM has some guidance on this subject in 5-3-2, but the general idea is your report should be "as accurate as possible". For routine position reporting like you'd use in non-radar environments (where you're giving an estimate of when you'll reach a reporting point) they're looking for "within 2 minutes flying time" on your estimates in most situations, so you'll want to give your position with the same sort of accuracy.

In the case you describe, with no DME, GPS, or other precision tool for reporting your distance and bearing from a fix your the most accurate option would be to report crossing a published intersection, VOR, or other reporting point noted on your chart - it's the most definite "I am HERE" report you can give, and ATC will certainly know the location.

If that's not an option (ATC needs to know where you are right now, and you're not over a VOR or charted intersection) I would probably start by computing the distance using the intersection of two VOR radials (whether this is a charted intersection doesn't matter, though it would help if your report is relative to one): Break out your chart and mark the location, then take your ruler and measure the distance from one of the stations (or a nearby intersection along the airway you're using) and you've got your position "as accurately as possible".

If you don't have a chart or can't get signal from a second VOR for some reason it's time to work out a time/speed/distance problem in the air:
If you flew over ABC VOR 10 minutes ago and are now flying from the VOR on the 090 radial at 120 knots, and you've got a 20 knot headwind (which you know from the Winds Aloft forecast, updated with data from previous position and time/speed/distance computations) then you know you've traveled about 17 miles, so you're "17 miles from ABC VOR, on the 090 radial".

The time/speed/distance computation has a lot of potential error (winds not as forecast, for one), but sometimes it's your only option.

Press the NRST button on your GPS, and give them the distance/direction from the fix:

Just because you are /U, it doesn't mean you can't use a VFR or handheld GPS for non-navigational position reporting. If you're IFR and don't yet, in 2015, have a an IFR or VFR GPS, or a handheld GPS running an aviation app in the cockpit, you should turn in your ticket. 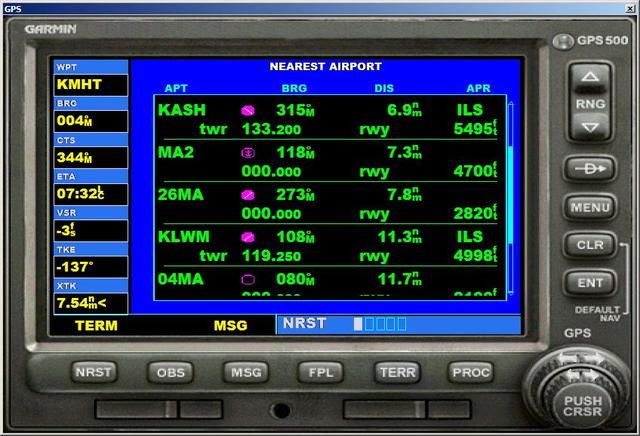 That would be acceptable to me, but probably more information than you need to give.

If you have a transponder, we'll give you a squawk code (and perhaps ask for an ident as well) and radar identify you that way. We will then call "radar contact" and advise where we think you are ("two-eight miles northwest of Podunk VOR"). If you don't have DME you won't be able to cross-check the milage but you can at least confirm you're on the 340-ish radial and be confident the controller knows exactly where you are.

In this situation the position report is useful so the controller starts scanning the appropriate area of the scope. If you're in an area where sectors are relatively small, e.g. in the terminal (TRACON) environment below 10000 feet or so, there aren't a lot of places you could be and an exact position report isn't crucial. Even if you don't have DME, you can look on your map and see that if you're on these two intersecting radials then you're in an area approximately twenty to thirty miles northeast of Podunk and you tell us that—and that's fine. If you're calling a center controller whose sector might be upwards of a hundred miles or more in either direction, the position report becomes more important.

For this method, if you think you're near to a named intersection/waypoint, giving a position relative to the waypoint is just as good as giving it relative to a VOR. Well, probably just as good. Depending on how well the controller has their airspace memorized.

If you don't have a transponder, an accurate position report is one way of establishing radar identification. In conjunction with the report you also need to tell us your heading or route of flight. We look and see if there is a single target in that area on that heading and radar identify you that way. If you don't give us either piece of information, or if there are multiple possible targets, we can issue an "identifying turn" of thirty degrees or more and observe a single target make such a turn and thereby identify you.

For this method you would probably want to be pretty close to a defined waypoint in order for it to be useful to identify you based on position report alone. Say within a mile or three, for a TRACON controller. A center controller will be zoomed out more; if you're the only target in the vicinity you might get away with five or ten miles, maybe.

For your information, at least in the terminal environment, there is a command we can enter to draw a range-and-bearing line on the scope from any target, or from a defined VOR or intersection, or from any clicked-on location, to any other target/fix/location. If you give a position as the intersection of two radials we would be able to draw those radials on the scope and see where they intersect. But that might be more work than a controller is willing to do unless they're having a really hard time finding you.

You don't say whether you talking about center or a tower. I would definitely never give a tower such a position. If I was talking to an ATCSCC, maybe in wierd scenario (broken transponder for example), but in all honesty it is the pilot's job to have charts and report position properly. Trying to get a controller to pull out a chart and compute your position is not a good idea, and I doubt they would cooperate unless it was an emergency.

Note that this often happens even when you accurately report your position. So, for example, you might call in "Nashua Tower, Cessna one seven two November five four three two one, six miles west of water tower, maintaining three thousand five hundred, with information Romeo", then tower might say, "November five four three two one, ident", then you push the button. Then, they will know exactly where you are.

Not the answer you're looking for? Browse other questions tagged air-traffic-control navigation instrument-procedures or ask your own question.

2
What are the rules of thumb for intercepting and tracking VOR and LOC courses?
21
What is the difference between conventional VOR and Doppler VOR?
24
What is the standard way for the ATC to ask a pilot to repeat him/herself?
3
Do GA aircraft pilots use predefined routes (via GPS or DME/VOR vectoring) or methods such as GPS-direct/ VOR-to-VOR in UC airspace?
1
Is it true that there are VOR/DME and/or TACAN stations in the oceans?
5
What is an appropriate way to practice ATC communications?
4
What is the best way to determine wind correction angle?