How can the Airbus A319 accommodate 156 passengers with overwing emergency exits?

This official image from the Aircraft characteristics airport and maintenance planning document for the A319 advertises the A319 as accommodating 156 passengers in a high density layout, this is also the figure in other Airbus documentation. 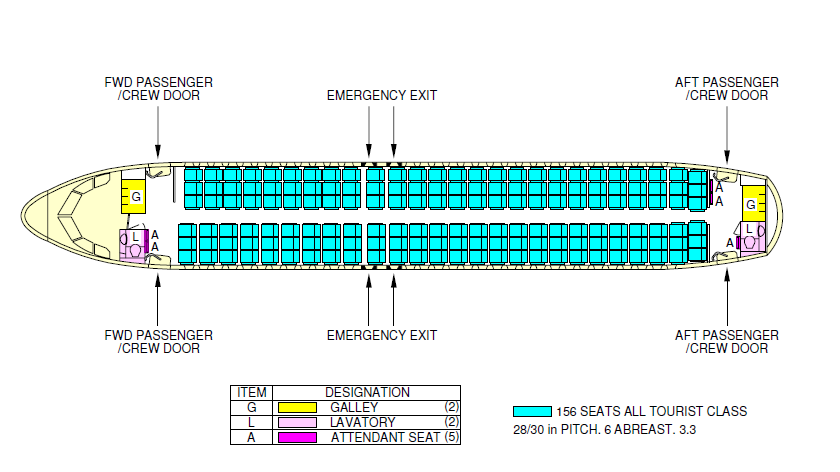 What I would like to know is how emergency exists is accommodated for? In the image it shows a row of seats at the exits, but I was under the impression that there is not allowed to be seats in line with the emergency exits? Can this variant thus only accommodate 150 passengers (156 - 2*3)?

My question is also valid for the A320.

Then I would also like to know, is there a policy for the amount of lavatories on board the aircraft, or is that simply a choice made by the airline? Are there for example airlines that have only one or even none lavatories on board models only used for short hauls?

Thank you for any help.

The FAA type certification for the A320 series can be found on the site here, under TCDS A28NM. For the A319:

Maximum Passengers:
145
See note 11 and 18
...
Note 11:
If modification 32208 is embodied in production on A319 airplanes, the aircraft is eligible for maximum capacity of 160 passengers. This modification consists in structural and system provision for the installation of second pair of overwing emergency exits.

The certification basis section g states that the design complies with the following regulations:

(c) The following must be provided for each Type III or Type IV exit—(1) There must be access from the nearest aisle to each exit. In addition, for each Type III exit in an airplane that has a passenger seating configuration of 60 or more—

The A320 series has three seats on each side, so the applicable distance is a 20 inch wide passage. The referenced paragraph (c)(1)(ii) is also interesting:

(ii) In lieu of one 10- or 20-inch passageway, there may be two passageways, between seat rows only, that must be at least 6 inches in width and lead to an unobstructed space adjacent to each exit.

This appears to be one layout that Air Canada uses.

There doesn't appear to be any regulation requiring a certain number of lavatories. Aircraft sometimes fly with only one working. Evidently no US agency requires even at least one.

However, the DOT does appear to have a rule created by the Air Carrier Access Act that says:

I read that as requiring the aircraft to have at least one, possibly two, lavatories, and that they must be accessible.

Of course this wouldn't apply to the A320 series, as it is a single-aisle design. Although some twin-aisle aircraft do operate on shorter routes, they are probably less likely to go the route of ">200 people, no toilets."

Not the answer you're looking for? Browse other questions tagged airliner airbus-a320 or ask your own question.

6
Where can I get a high-res photo of the RAT from an A320 Airbus?
10
How can I calculate the fuel consumption of an Airbus 320-200 at various loads?
21
Why is the Airbus A320 permitted to carry 180 passengers, instead of the maximum 179 allowed?
10
What are these “lines” on the A319 flaps, are they damaged?
12
Can the APU provide emergency thrust?
2
How does the Airbus ECAM / ND transfer work?
5
What is the unit for the oil quantity display in the Airbus A320 ECAM?
3
Which airliners have carried the most passengers?
0
How to disable GPWS in a 737NG just like how the Airbus can?