What are the advantages of twin-fuselage aircraft? 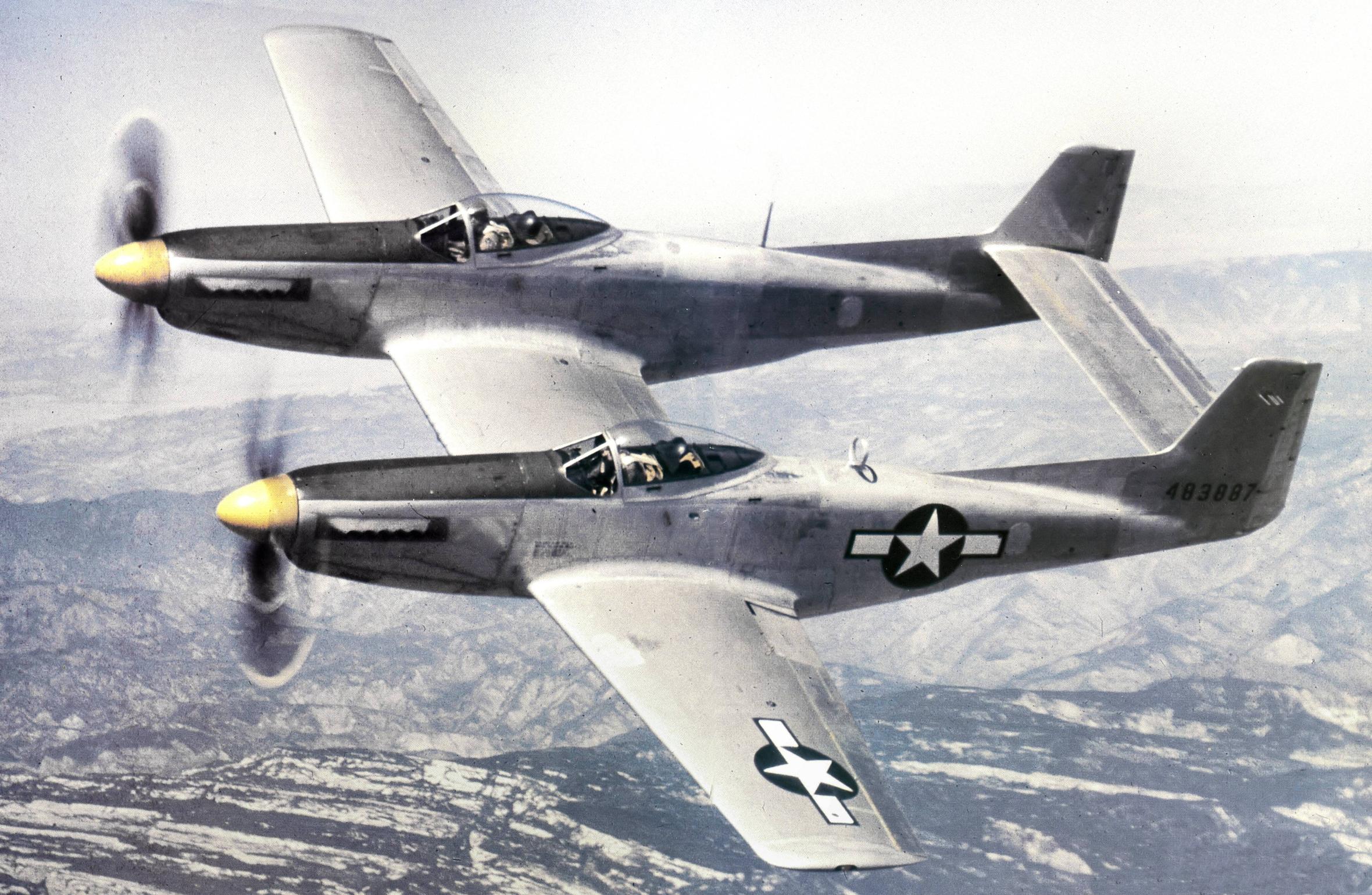 Twin-fuselages seemed to disappear after the 1960s but recently, Virgin Galactic has come out with a twin-fuselage aircraft, the WhiteKnightTwo. 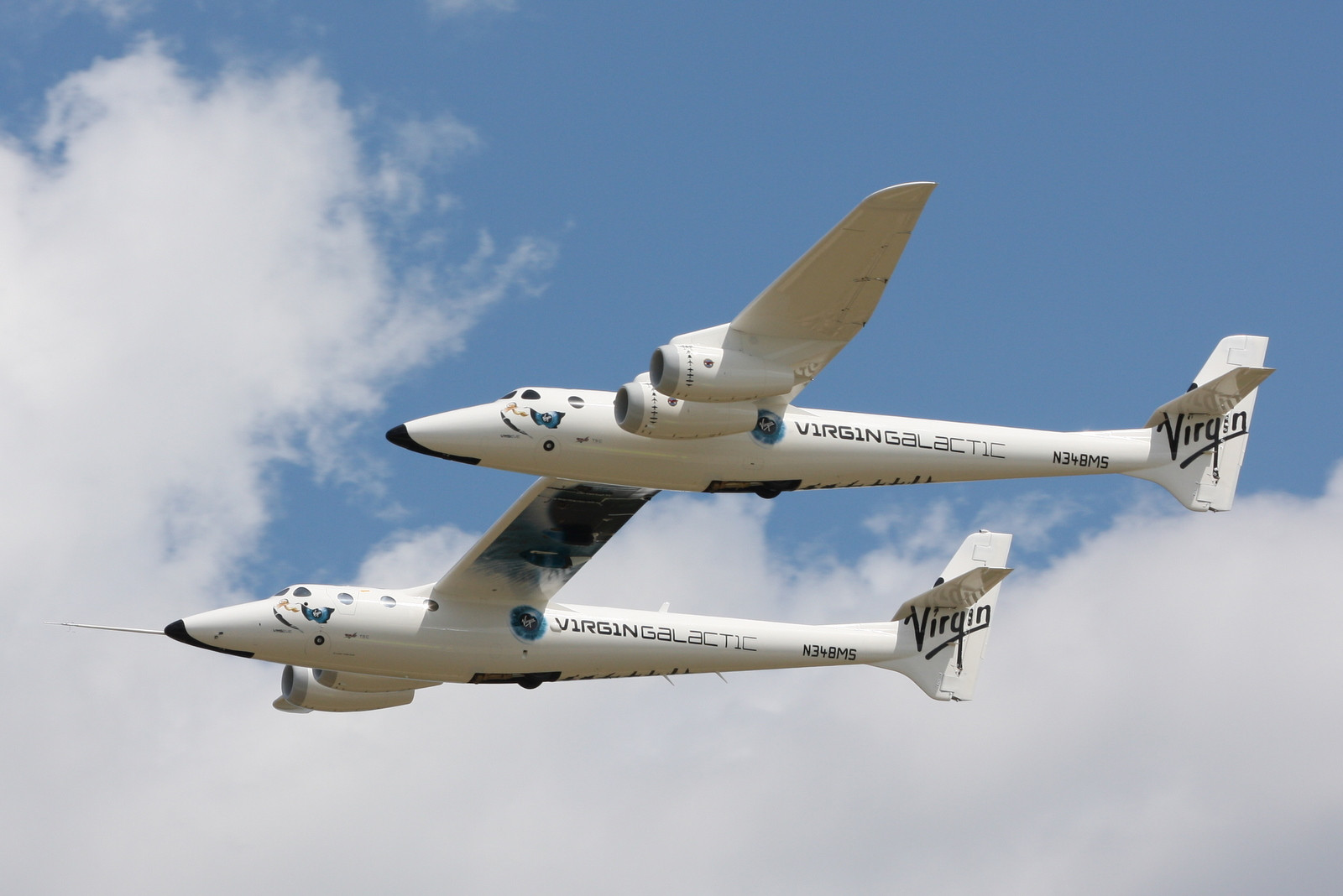 I understand the Virgin design as the space module (SpaceShipTwo) is designed to fit between the two fuselages. But aside from that special case, are there any advantages to twin-fuselage aircraft?

Was their design and introduction in the 1930s-1950s merely a strange historical accident (and if so, what was the reason d'etre then) or do they currently or potentially have advantages over single-fuselages such that we might see their return?

Depending on the design, one of three advantages made designers choose a twin-boom layout:

There are two groups of twin boom designs: Those which were designed that way from the outset, and those which were later derived from single-fuselage designs. You could add a third group, those with two distinct fuselages and an offset pilot position, but an offset cockpit could also be a result of other design considerations. Examples are the Junkers 322 or the Blohm&Voss BV 141, both single-fuselage designs with an offset cockpit.

The first group comprises aircraft like the D.H. 2, the Saab 21 (picture below, source) or the Gotha Go-242. Here the designers wanted to create space for the propeller or a loading ramp. Also, some early jet aircraft used a two-boom layout to keep the tail structure free of the jet blast. The advantage is obvious: No structure at the rear fuselage.

The second group arose due to the performance requirements of modern, all-metal, stressed-skin designs with cantilevered wings. Remember that at the beginning of the 1930s fighters were still biplanes (Hawker Fury, Heinkel He-51), and new designs like the Caudron 460 or the Messerschmitt Bf-108 showed that sleek aerodynamics and high wing loading were the way ahead. However, unlocking the performance potential possible with these designs required much more powerful engines. The engine manufacturers could increase power output only slowly, so a number of designs (Lockheed P-38, Messerschmitt Me-110, Bristol Beaufighter, Northrop P-61) tried to use two engines. Since there were two engines already with a big space requirement for the turbocharger, Lockheed decided to use a two-tailboom design. Here the advantage was a smaller overall surface area to house two engines, their coolers and turbochargers, and the pilot (picture below, source). 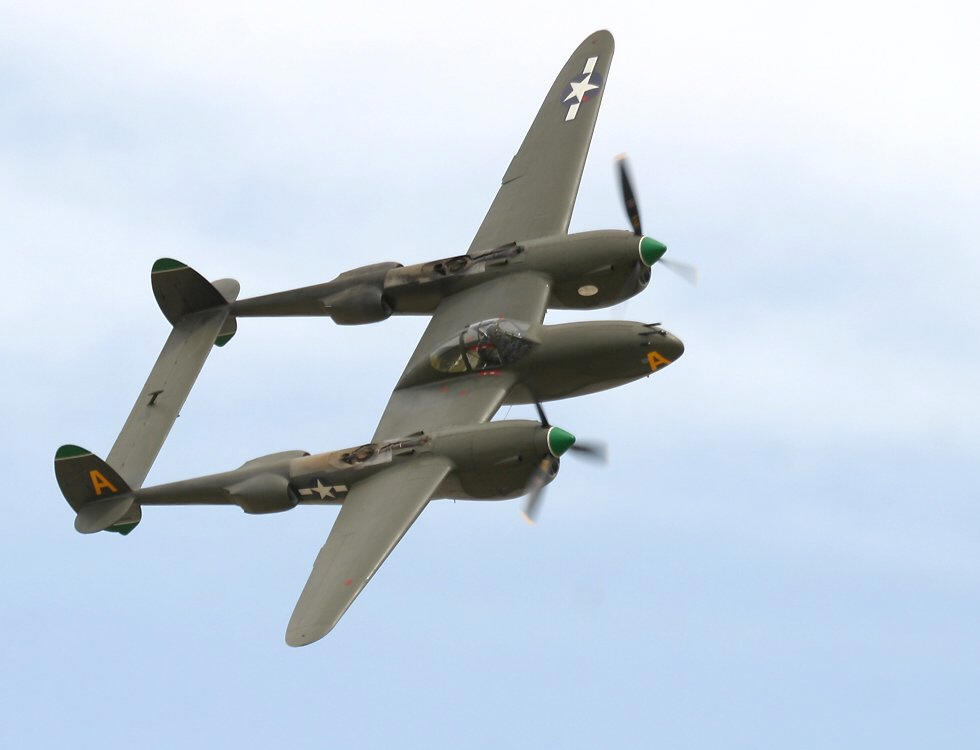 During the war, again the requirement for more powerful aircraft arose, and to avoid the delay of a fully new design, existing aircraft were combined, shortening the development time greatly. The first of those was the Heinkel He-111 Z (for Zwilling = Twin), which added a fifth engine to be able to pull the giant Me-321 transport glider. Joining two powerful aircraft was proposed for the Messerschmitt Bf-109 (Bf-109 Z), the Messerschmitt Me-309 (Me 609), the Dornier Do 335 (Do 635), the Savoia-Marchetti SM.92 and the North American P-51, the only one of those to result in an operational aircraft, the F-82. This resulted in an agile aircraft with high speed and high range, which was very useful for escort or reconnaissance tasks. However, only few of those were used operationally, because soon jet aircraft filled that need in a better way.

The main disadvantages of the twin fuselage designs with their offset pilot position is the high radius of roll inertia and the vertical acceleration suffered by the pilot during rolling maneuvers. Especially for a fighter, a fast roll response is the key to success in aerial combat, and a twin fuselage will impose a penalty not suffered by a two-engined aircraft with a central fuselage. This is compounded by the pilot suffering additional vertical acceleration when rolling, which again will reduce the likely roll agility of the twin-fuselage aircraft.

Might we see more twin-boom or twin-fuselage designs in the future? Probably only for special purposes, like the example you have given yourself. Another might be the Kensgaila VK-7, a Lithuanian airfoil testbed which combines two Blanik gliders with a special, exchangeable center section for testing new airfoils under realistic conditions. This one is not even on Wikipedia's list of twin-fuselage aircraft!

Earlier twin-boom transport aircraft like the Fairchild C-119 or the Nord Noratlas have given way to conventional layouts with a raised tail to accommodate the rear ramp. Twin-boom and twin-fuselage designs are less stiff and more prone to flutter than conventional configurations, so the conventional design prevailed and will do so in future as well.

As paul mentioned, the dual-fuselage fighters of WWII were primarily just ways to build a longer-range fighter much more quickly than starting with a completely new airframe design.

The F-82 specifically was designed to escort long-range bombers on bombing missions over Japan from U.S. bases in the Pacific (the Solomon Islands or the Philippines, for example.) However, the war ended before it entered service.

The Germans also designed the twin-fuselage He 111Z as a tug to tow troop-drop gliders in WWII. Again, this was much faster to get to production than designing a new aircraft. Obviously, time-to-production is a very big consideration when you're in the middle of an ongoing war and need some specific capability for the war. In such cases, earlier service entry may override a more elegant design.

Another use that Wikipedia mentions for dual-fuselage aircraft was for early seaplanes. In these cases, the dual fuselages added stability on the water, similar to the way pontoons or outriggers are used, especially for flying boat designs where the aircraft uses the bottom of the fuselage as a hull in the water rather than using separate floats.

Finally, as you mentioned, the most recent uses of dual-fuselage aircraft have been for space launch vehicle carriers, such as the White Knight Two and the ridiculously-massive Scaled Composites Roc built for Stratolaunch Systems. The reasoning here is that you obviously want the payload that you're going to be dropping mid-flight to be along the centerline of the aircraft for CG reasons. When said payload is something the size of a space launch vehicle, a dual-fuselage design allows you to leave a really big space to mount the launch vehicle while still keeping the weight balanced laterally. 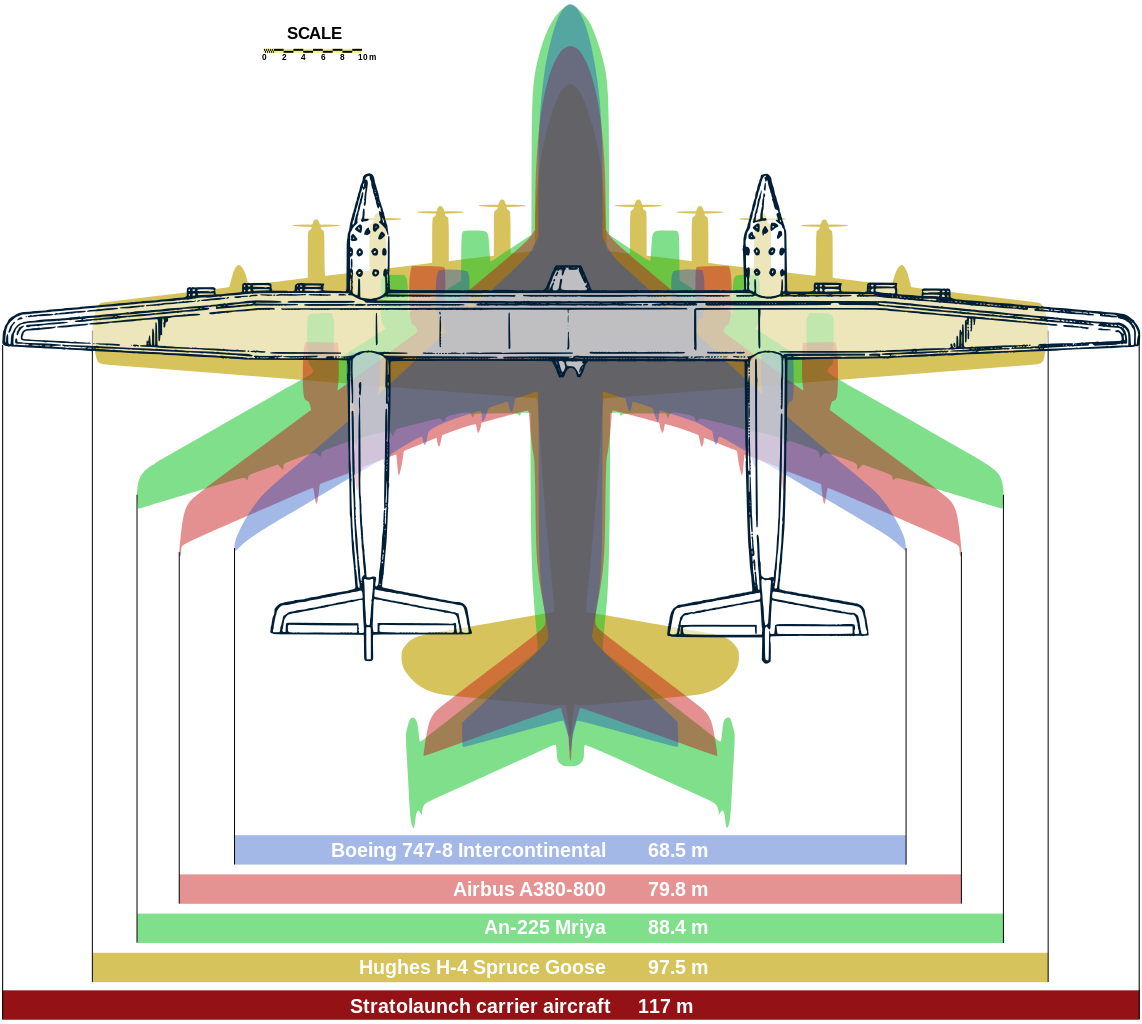 The F-82 in the top picture is the result of a wartime need for a long-range fighter-bomber. It takes a long time to design and tool up for a new aircraft, it takes rather less time to use your existing tools and rearrange the pieces you already have.

Long range means more fuel, that means more power, and in 1945 that meant a second engine. So, lets take two of those, build the center part with existing tools and we're done.

A more detailed explanation can be found on Wikipedia.

There's an entirely new type of twin fuselage plane being designed. It is really something halfway between a flying wing and a twin fuselage, so if this counts as twin fuselage for your purpose you'll need to decide for yourself. 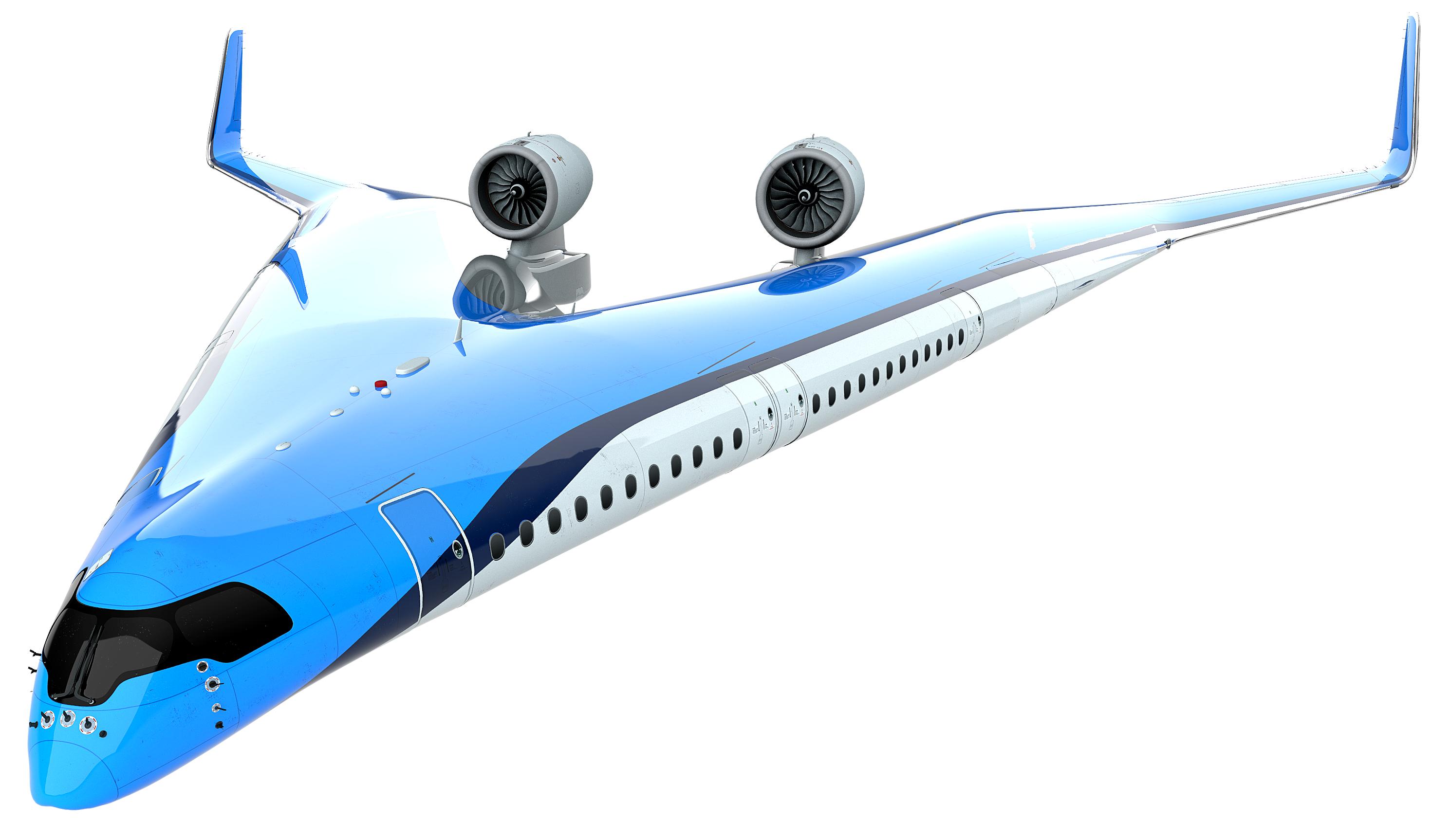 It's called the Flying-V, and the reason for the design is to get a lot higher fuel efficiency. It's basically taking the aerodynamic advantages of a flying wing and modifying that idea to be practical for passenger transport. The designers claim it will use 20% less fuel than an Airbus A350.

10
What aerodynamic implications would a fictional two-pronged fuselage have?
9
Aside from the Stratolaunch, how many other aircraft have split bodies?