What materials make up most of the weight of an aircraft?

What are the material types account for most of the empty weight of an airplane (Boeing 747), besides aluminum or its alloys used in fuselage?

Besides aluminum alloys, most of an airplane's weight is steel, titanium, and composites. Here is a chart comparing the 747 and 777 structural weight, with a breakdown typical for similar airliners: 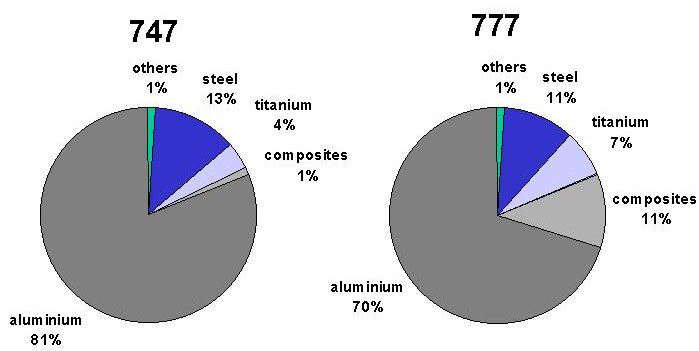 Steel is used in components where strength or part life is most important, like landing gear and other important structural elements, as well as many fasteners. Titanium is used where weight and high temperature are important, such as around the engines. Composites are traditionally used for many less-structural applications such as panels and fairings, but may also be used in the empennage (tail surfaces) or on the interior as floor beams. Other materials will include alloys like nickel, as well as specialty materials like rubber, plastic, and fabric, which are used mostly in the cabin.

New aircraft like the 787 and A350 use composites much more extensively, replacing much of the aluminum. Titanium is also used more in these aircraft because it does not tend to corrode in contact with carbon fiber composite like aluminum does.

Federico pointed out that the two graphics differ in the amount of aluminum on the 777 (70% on the first vs. 50% on the second), because the first chart shows only structural weight, while the second is overall.

A general breakdown by material type isn't really useful (or possible) because the heaviest components of most aircraft are composed of multiple materials, and not all aircraft are built of the same materials.

The heaviest component of most airplanes is the fuselage. This is predominantly aluminum, but possibly composite in newer aircraft (Cirrus SR-22, Boeing 787), and some aircraft have multiple materials used (e.g. Mooneys have an aluminum skin, but a steel frame/cage, and "tube-and-fabric" airplanes use cloth and dope stretched over a (typically steel) frame).
While the alloy (or composite) used for the fuselage is probably relatively light compared to say a car's frame & body it's usually the largest part of an aircraft, and thus the heaviest.

The number two component on an airplane is the engine (or engines) -- the engine may even be the heaviest component of some aircraft (Ultralights and some tube-and-fabric aircraft).
As with the fuselage an engine is often comprised of multiple metal alloy: crank shafts and cams tend to be steel, lifter faces are often cast iron, the crankcase tends to be aluminum, pistons are usually both (a steel barrel mated to an aluminum head), and various alloys are used in bearings and valve guides.

As an example if we look at a Piper Cub the heaviest alloy is probably steel (the fuselage tubing, crankcase, and camshaft are all steel). Number two is probably aluminum (the engine crankcase, pistons, and cylinder heads are aluminum, as are the wing ribs and possibly the spars). Number three might be wood (if the spars were never converted to aluminum), but is more likely the fabric (and dope/paint) used to cover the fuselage.

As a different example, consider the de Haviland Mosquito: The heaviest component of this aircraft is unquestionably wood (as the aircraft is constructed almost entirely of wood), and the number two item is probably aluminum or iron (from the engines & propellers).

3
What are the criteria that govern the choice between titanium, composites, and more common materials, like aluminum?
4
What are the wings and fuselage of an airliner made of?

15
How is the weight of an airplane measured?
4
What kind of insulation is used on commercial aircraft?
3
What are the criteria that govern the choice between titanium, composites, and more common materials, like aluminum?
12
What materials are used for the gas bags in hydrogen airships?
2
What is the material composition of aircraft compressor blades?
4
Which are the main aluminium alloys used in airliner construction?
1
What is the weight of the bulletproof cockpit doors of a Boeing 747?
6
What material is used for the floor panels in the main cabin for Boeing 747-400?
8
What is the weight of the fuselage (only) of the Boeing 747?
4
What made Concorde so heavy?