What are different types of weights of an aircraft?

What do they mean and how they are different?

The different terms represent different weights or masses1. For each flight, the weights are taken into account for several reasons.

A brief description about these is below:

This excludes any baggage, passengers, or usable fuel2.

As a flight progresses and fuel is consumed, the total weight of the airplane reduces, but the ZFW remains constant.

It is the basic weight of an aircraft including the crew, all fluids necessary for operation such as engine oil, engine coolant, water, unusable fuel and all operator items and equipment required for flight but excluding usable fuel and the payload.

It is the carrying capacity of an aircraft. It includes cargo, people, extra fuel. In the case of a commercial airliner, it may refer only to revenue-generating cargo or paying passengers.

This is the maximum weight at which the pilot of the aircraft is allowed to attempt to take off3.

Depending on different factors (e.g. flap setting, altitude, air temperature, length of runway), RTOW or maximum permissible takeoff weight varies for each takeoff. It can never be higher than MTOW. More information is on this answer.

This maximum weight at which an aircraft is permitted to land3. 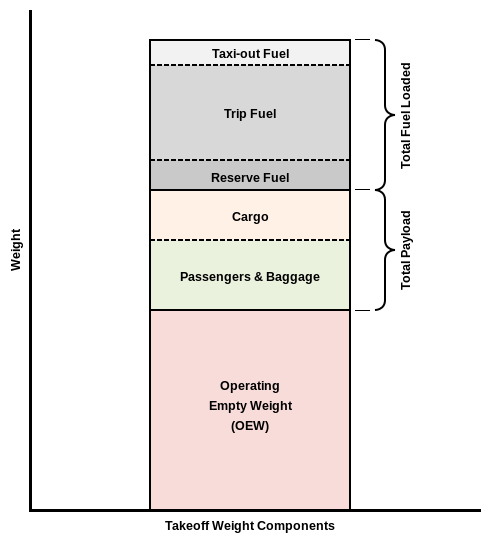 It is the maximum weight authorized for maneuvering (taxiing or towing) an aircraft on the ground.

It is the total aircraft weight at any moment during the flight or ground operation. This decreases during flight due to fuel and oil consumption.

1: As mentioned (below in comments by SentryRaven), several recent references use the term mass instead of weight. Having a Physics background, I tend to agree and know the difference between weight and mass. I did not use mass as most of the references I included referred mass as weight. However, using correct terminology, all the weights mean mass. Thanks SentryRaven for pointing it out.

2: What is the different between usable fuel and unusable fuel?
Usable fuel is the fuel on board an aircraft that can actually be used by its engines. The small amount of fuel that cannot be drained from the tanks is the unusable fuel. For calculation of range, usable fuel is used. For weight and balance total fuel (usable + unusable) is used.

3: This restriction is due to structural, design or operational limitations.

Read this from left to right, from detailed to generalized. Boxes on the right sum up the separate items which they run across. 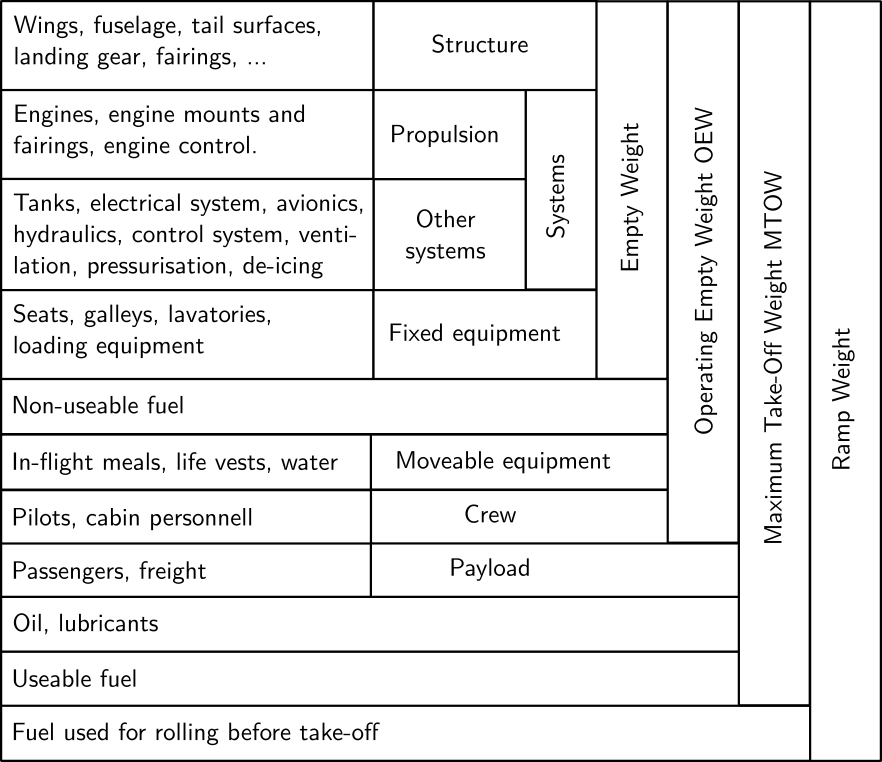 The maximum landing weight is what the manufacturer has certified for landings. Generally, this is MTOW minus some fuel.

Note that every manufacturer has his own standard and might draw the lines between the different weight groups differently. Say, for one the engine quadrant is part of the propulsion system, whereas the other sees it as part of the control system.

Lets see if I can make it more simplified.

Max landing weight is in reality mzfw plus some fuel in the wings which will not cause structural failure upon touchdown. For example an aircraft carrying max fuel for transatlantic flight must dump fuel when returning for landing due to an emergency,this procedure will ensure that the wings of that airplane won't break upon touchdown .

Otherwise good answers over all.

Not the answer you're looking for? Browse other questions tagged aircraft-design weight-and-balance or ask your own question.

13
Can a commercial airliner be too heavy to take off?
6
What is RTOW and how is it different from MTOW?
5
Is there a specific formula or way to calculate flex temperature for an Airbus A320?
3
How does switching off pumps and putting on MAN switch resolve low pressure?
1
How is maximum payload determined in the payload-range diagram?
1
For electric aircraft, is MTOW = Empty weight + Maximum payload?

13
How does dropping ordnance affect the weight and balance of the aircraft?
9
What are the different structural weight limitations that have to be considered when loading large aircraft?
11
Are general relationships between MTOW and OEW valid for novel configurations?
10
How do airlines handle uncertainty in passenger weight for weight and balance calculations?
42
What if all passengers pay to check in extra baggage?
11
Is the MTOW determined by the wheel maximum supported weight?
7
What performance issues/symptoms can a pilot expect while taking off above MTOW?
7
How do handling characteristics depend on flying with a full vs. an empty tank?