Can VOR indication be reliable if one of its antennas breaks?

What will be the reliability of the VOR indication inside the cockpit if one of the two outside antenna is broken ?

Can we trust it to make a VOR approach?

What will be the consequences assuming that we are in a general aviation aircraft like cessna 150 / 172 / 182 . 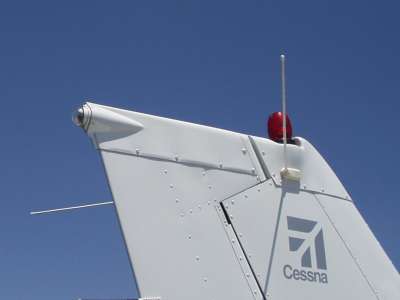 No, it should not be used.

Twin antennae, as you have shown, are balanced and fed into a balun (BALanced to UNbalanced) to feed the single transmission line to the receiver. Together, they provide the correct impedance for the aerial system. With an antenna broken, it is likely that the impedance of the circuit is wrong and therefore, the input to the receiver is, at best, suspect.

It's impossible to predict the indicated behaviour without knowing precise details of the aerial fit but a reasonable guess would be that the standing wave ratio in the feed will be altered and therefore, a phase error will be introduced. The magnitude of the error will vary in proportion to the sine of the actual phase angle so my guess would be that the bearing will be accurate when due South or North of the VOR then increasingly inaccurate as you move round with an maximum error at 90 or 270.

Early in the morning when I first wrote this but I think I am wrong about being accurate due North or due South. It will be accurate somewhere on the compass and at 180 degrees opposite to that, with increasing inaccuracy as you move towards 90 degrees away from that somewhere. Only calibration would tell you where the somewhere is.

The literal answer is, who knows? The only way to find out for sure would be to calibrate the VOR and observe the deviation - if any - from the expected readings. The instrument manufacturer might have some general guidance, but no one can predict the results of physical damage accurately.

But having said that, it doesn't really matter anyway: you shouldn't be doing anything that requires a VOR if you know that the equipment is broken. Even if it still seems to be accurate despite the missing antenna, what happens if you lose the other antenna? Or some broken wiring starts causing intermittent false readings?

And although this is getting away from the exact question that you asked, there are regulations to consider. You didn't mention a specific jurisdiction, but let's assume US/FAA for now, I'm guessing the general rules are very similar in most places. If you're VFR then you don't need a functioning VOR anyway: by definition, you will never be relying on it for anything because you're navigating visually. It might be helpful to have a VOR in VFR, but it isn't required. (14 CFR 121.349 does allow for VFR flights on routes where you can't use pilotage, but it also requires two independent navigation instruments.)

On the other hand, if you're IFR then it would probably be illegal for you to rely on a VOR that you know is damaged. 14 CFR 91.205 requires "navigation equipment suitable for the route to be flown", and I think it would be difficult to convince the FAA that a VOR with a broken antenna is suitable for navigation.

But the most basic point of all is that relying on broken equipment is just dangerous, especially for an instrument approach where you're relying on the accuracy of the instruments to prevent you from colliding with the ground or an obstacle. In my opinion, taking that chance would show very poor decision-making and general airmanship.

The only effect of a broken VOR antenna is that the polar pattern of the antenna will be altered, and its efficiency as an antenna decreased because it will be mismatched to the feed line. This means that you may only pick up the VOR when the "good" antenna element is closest to the beacon, and its lower efficiency will mean that the range from the beacon you get a signal will be decreased.

The navigation information is all carried in the 30 Herz modulation on the main carrier and the FM subcarrier: nothing in the VOR receiver ANTENNA can affect the phase relationships of the 30 Herz.

If the warning flag is not showing, there is adequate signal and the VOR bearing will be accurate.

Not good practice to leave an antenna broken in this way, but it is not an issue regarding safety as long as you've got enough signal (i.e. no warning flag).

Exactly the same applies if you're receiving an ILS localizer - the information is in the 90 and 150 Herz modulation in this case. As long as the warning flag isn't showing the information WILL BE ACCURATE.

VOR's direction doesn't come from the aircraft seeing where it comes from.

VOR works by a pulsing omni-directional beacon and a sweeping narrow beacon. The pulse happens each time the sweep is north. Then the heading from the compass is used to see where the beacon is relative to the airplane.

Does this mean that you can use it for navigation with a missing antenna?

Not unless the system was designed to compensate for a missing antenna.

In general, if a piece of equipment has an operability issue, it should not be used for navigation.

That said, if you test it and the test indicates it is functioning reasonably, it may be ok to use it on SHORT TERM BASIS. So, for example, if I were taking off from Manchester I would fly up to the Cordcord VORTAC and see if I were getting reliable readings. If so, I would probably feel ok using it on a VFR approach.

In any case, the antenna should be fixed before using the instrument long term. To use the receiver with a damaged antenna once or twice is excusable, but not for an extended time.

Note: By "reliable" readings I mean you are receiving a signal at different attitudes, or at least in the attitude you need for navigational purposes. The effect of a broken antenna will be to reduce your gain or possibly introduce a blind spot into your reception area. Note that these effects are ALWAYS present anyway. For example, in mountainous terrrain or if the VOR is straight ahead you could have blind spots in the VOR even with a perfect antenna. So, a broken antenna basically just makes standard reception problems you already have, worse.

Not the answer you're looking for? Browse other questions tagged navigation flight-instruments radio vor reliability or ask your own question.

20
How does TACAN work?
14
What are the FAA requirements for an aircraft to be IFR certified?

11
How would ATC try to establish contact with a VFR craft?
17
Can a pilot use their GPS/FMS to fly a VOR or NDB approach?
33
Why is there a grid below the antennas of an VOR?
4
How does one reverse direction on a VOR radial?
1
Can I do a dual VOR check on the ground?
7
What would be the likely indication on the VOR for the below question?
2
I have two VOR receivers, but if one VOR is out of tolerance, can I still fly IFR?