Do Jet-A and 100LL smell different?

Recently, a small plane operating from a nearby airport suffered an engine failure on takeoff and crashed. One of the hazmat responders dealing with the resulting fuel spill mentioned "a strong smell of Jet A", leading to speculation that the airplane had its tanks filled with the wrong fuel. Would he have been able to distinguish Jet A from 100LL by smell?

If you know what you're looking (sniffing) for, yes.

Avgas 100LL smells like gasoline (a little different than what you pump into your car, but similar).

If you are familiar with how both smell you can tell them apart by odor, and a significant contamination of Avgas with Jet-A could be detected by smell. (Other tests, like an evaporation test, are more reliable for lower levels of contamination however).

Sounds like there was no fire at the accident site so that's good.

It is possible that a mixture of 100LL and JetA (say 3/4 tank of 100LL topped off with JetA) could have passed the smell test and color test during sumping but still have caused the accident.

Possibly the Avgas evaporated quickly at the scene leaving only the jet fuel lingering for the hazmat responder to smell. So even a partial mixture could have done it.

However, if you pulled up to any arbitrary FBO or self service rig to fuel your aircraft, you would not be able to get the JetA nozzle to fit in your tank. The following is an excerpt from this wiki page: http://en.wikipedia.org/wiki/Aviation_fuel

Because of the danger of confusing the fuel types, precautions are taken to distinguish between avgas and jet fuel beyond clearly marking all containers, vehicles, and piping. The aperture on fuel tanks of aircraft requiring avgas cannot be greater than 60 millimetres in diameter. Avgas is often dyed and is dispensed from nozzles with a diameter of 40 mm (49 mm in the USA).[7] [8]

Jet fuel is clear to straw-colored, and is dispensed from a special nozzle called a J spout that has a rectangular opening larger than 60 mm diagonally, so as not to fit into avgas ports. However, some jet and turbine aircraft, such as some models of the Astar helicopter, have a fueling port too small for the J spout, and thus require a smaller nozzle.

Here is a graphic showing the two spout sizes: 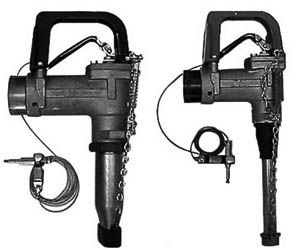 Simply put, a JetA fueling nozzle will not fit in the aircraft tank's filler neck. So if there was a fueling mishap, it almost needed to be done by the operator with a homebuilt self fueling rig in his hangar.

Side note: In the late 80s or early 90s when I owned an FBO with a maintenance shop, the Chevron facility in Richmond CA had a refinery valve mishap and filled several tanker trucks with avgas while JetA was leaking into the delivery apparatus. There were many dozens of piston aircraft fueled by the time they discovered and remedied it. The FAA issued an AD against all aircraft that got some of this fuel and Chevron bought each owner an overhaul.

5
Why do commercial airplanes smell like fuel smoke before take off?
6
Why does avgas 100LL smell different than automobile gasoline?
7
What is the freezing point of 100LL Avgas?
2
Why are jet fuel prices very similar in North America and Europe, yet automotive fuel prices are very different?
3
Are there different symbols or graphics to identify different types of GA fuels?
6
Is it safe to mix different types of fuels in a jet engine?
2
What practical alternatives are there to 100LL in 2021?
7
How to safely handle AVGAS (100LL)?