What UK aircraft looks like an Islander but with twin fins?

Like the Islander it was a twin prop with a fairly pointy nose.

Does anyone have any idea what it was?

It sounds an awful lot like a C-145, or maybe the 'civilian' version (it's primarily used by militaries), the PZL Skytruck. 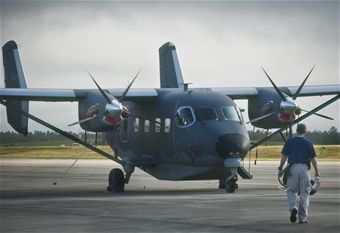 14
Aircraft Identification: What single-engine, T-tail, commuter aircraft has a single prop but sounds like a jet?
5
What aircraft is this twin prop?
8
What aircraft looks like a cross between a Cessna and a glider?
14
What is this vintage small airplane with low wings and twin propeller engines?
28
What is this fighter-like plane with huge wings?
6
What is this twin engined jet?
11
What is this high wing twin airplane?
24
What is this aircraft with a crew member in an exposed nose compartment?
2
What plane is this, looks a lot like a BAe-146-100 or an Avro 146-RJ100, however with only 2 engines?
8
Radial-engine twin with square/straight tail