How does an inexperienced pilot handle G-Forces?

After reading this question and the linked article, I had some more questions about G-Forces on pilots.

The average, fit aviator has about a 3g "naked" limit, which comes from automatic tightening of blood vessels forcing blood to the brain.

I'm a private pilot, with no training with G-forces. I'm average fitness (maybe even a little below average).

For the big 40th Birthday, I went to the Sky Combat Ace experience, doing simulated dog-fights in Extra 330LCs.

The instructors said that both my brother and I pulled in excess of 7G. (with no G-suits or anything beyond some grunting).

I'm not so sure I believe that now. Were they blowing smoke to give us a fun experience? Or could I have credibly pulled 7G for 10-20 seconds without prior experience?

So it is certainly possible from an airplane perspective that you pulled that many Gs - in an aerobatic airplane, it's not unheard of to pull 1G less than the aircraft limit (usually there is a large margin of safety built into that number before a catastrophic structural failure).

Now did you pull 7Gs? As others have noted, 7Gs for 10-20 seconds seems very unlikely. But it is not out of the question your peak instantaneous G load was 7.

From a human factor standpoint, G-suits typically don't increase the max G-load, but rather increase the sustained G-load and the time period it can be held for. G-suits do very little to actually decrease blood flow (pooling in the legs) - they primarily serve as a reminder to the pilot to perform an AGSM.

A g-suit does not so much increase the g-threshold, but makes it possible to sustain high g longer without excessive physical fatigue. The resting g-tolerance of a typical person is anywhere from 3-5 g depending on the person. A g-suit will typically add 1 g of tolerance to that limit.

All of those numbers I just listed do not take into account the pilot performing an AGSM (Anti-G Straining Maneuver). This can add several Gs to the pilot's tolerance, and is one of the biggest things taught in physiological training for high-G maneuvers.

So TL; DR: could you have pulled 7Gs without prior exposure? It is possible, depending on varying personal factors and body type, but it is not likely. However, with a little training, 7Gs is perfectly attainable.

A normal acrobatic ride experiences 3-4 G's for a few seconds. Competition acrobatic pilots will pull up to 5 Gs for 2-3 seconds, which is risky. It is difficult to do more than this in a piston-powered aircraft. 5 Gs for more than 5 seconds will present a significant risk of a blackout or loss of consciousness in an inexperienced person. From a textbook on aeronautical medicine: 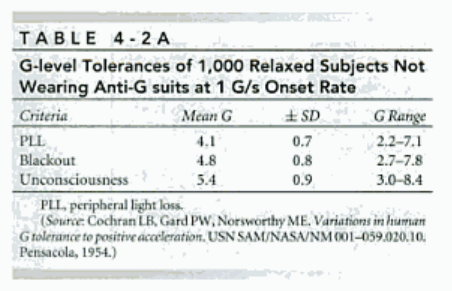 Not the answer you're looking for? Browse other questions tagged human-factors g-forces dogfighting or ask your own question.

18
Does a prone position for the pilot minimize g-force effects?

18
Does a prone position for the pilot minimize g-force effects?
4
Can hypersonic aircraft be agile without the G forces harming the pilot?
3
What are maximum G forces humans can survive?
7
How did ww1 pilots handle G-forces?
8
How does a PFD handle unphysically abrupt changes in the parameters it's displaying?
3
Barometric altimeter data during high vertical g-forces?