What does "OBJECTIONABLE" indicate on a VFR chart?

On the Tulsa, Oklahoma VFR sectional the top of the outer Class C ring says "OBJECTIONABLE". Does this indicate some information on the chart is in dispute? I don't see anything in the VFR chart legend or side panels about the meaning. 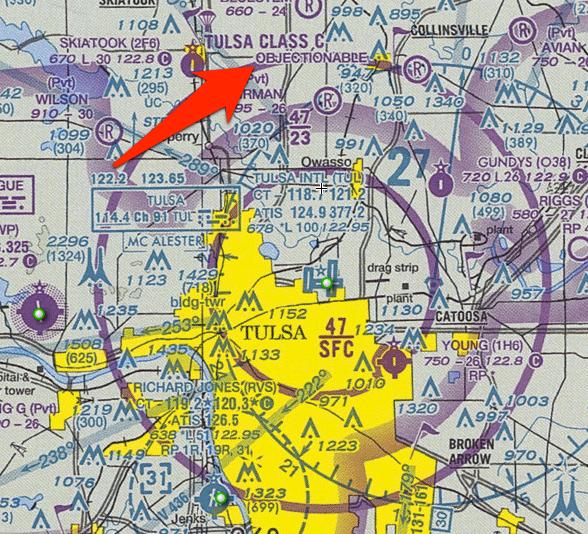 airspace aeronautical-charts symbology
Share
Improve this question
edited May 14 '14 at 1:57

It means that the airspace around the airport is still under review after a proposed change.

This article explains it in more detail: http://expertaviator.com/2012/07/31/what-is-an-objectionable-airport/

And here's the official text: Part 157

(b) An airport determination issued under this part will be one of the following:

(1) Revise the determination based on new facts that change the basis on which it was made; or

(2) Extend the determination void date. Determinations will be furnished to the proponent, aviation officials of the state concerned, and, when appropriate, local political bodies and other interested persons.

According to the FAA Aeronautical Navigation Products FAQ:

What does "OBJECTIONABLE" stand for on VFR Charts?

"OBJECTIONABLE" indicates an airspace determination per FAA Joint Order 7400.2J Section 4, Airport Charting and Publication of Airport Data, issued 9 FEB 2012. When you see this indication on a chart be sure to refer to the applicable Airport/Facility Directory for more information. FAA Regional Airports Offices are responsible for airspace determinations. Address any challenges to objectionable airspace determinations to your regional airports office.

a. This part provides guidelines, procedures, and standards that supplement those contained in 14 CFR part 157, Notice of Construction, Alteration, Activation, and Deactivation of Airports.

b. These guidelines, procedures, and standards must be used in determining the effect construction, alteration, activation, or deactivation of an airport will have on the safe and efficient use of the navigable airspace by aircraft.

a. All landing facilities which have received airspace determinations or those not analyzed, must be properly documented and processed in accordance with procedures contained in FAAO 5010.4, Airport Safety Data Program.

Not the answer you're looking for? Browse other questions tagged airspace aeronautical-charts symbology or ask your own question.

30
Do I have any authority over airspace above my land?
12
How is a prevailing wind/average temperature study conducted to determine the runway direction and length for an airport?
3
Why are some non-towered airports charted with an empty circle?

7
Where can you find symbols (like these) that aren't on the legend?
4
What exactly is the airspace above CYYZ (Toronto)?
5
What class is the airspace at KGCN when the tower is closed?
1
Re old (1992) US VFR sectional charts-- when was the thin dashed magenta line first used?
3
Re old (1993) US VFR sectional charts-- when did the term "Class E" first appear?
4
What does the letter J mean at the start of an FAA instrument approach chart identifier?
20
Why would an airport be depicted with symbology for runways longer than 8,069 feet even though it is reported on the sectional as 7,200 feet?
4
Were planned release dates skipped in 2020 for the VFR sectional charts for Juneau Alaska and Dutch Harbor Alaska?
3
Does this chart show a heliport in class D airspace without a control tower?
6
What does Airspace 24 mean in this chart supplement?