How are the “medical communication” headset sockets on some airliners used?

I was recently on a flight during which a passenger had a medical emergency. The passenger vomited and was reportedly unconscious.

The aircraft was either a Boeing 737-700 or 737-800. I'm pretty sure it was the 800. It had pretty blue lighting on the interior ceiling, including oval illuminated cutaways.

Located above one row of seats were two ports marked "Medical Communications" (or something like that).

During the emergency, one of the flight attendants connected a wired headset to these ports in order to communicate with others.

With whom was he likely speaking?

As an aside, the system was poorly designed. One ports was black and the other gray; both ports otherwise looked identical and were the same size; the colors of the headphone connectors did not match the ports. Both ports were required to make it functional. The flight attendant had to try multiple times to get the correct wires into the correct ports. I had to help the flight attendant get it connected properly. Such a simple and important issue to fix.

Bonus question: Given that the multiple ports did not appear to be for redundancy, why was such a time-critical system not designed with a single port?

I'm going to assume you're talking about something like this: 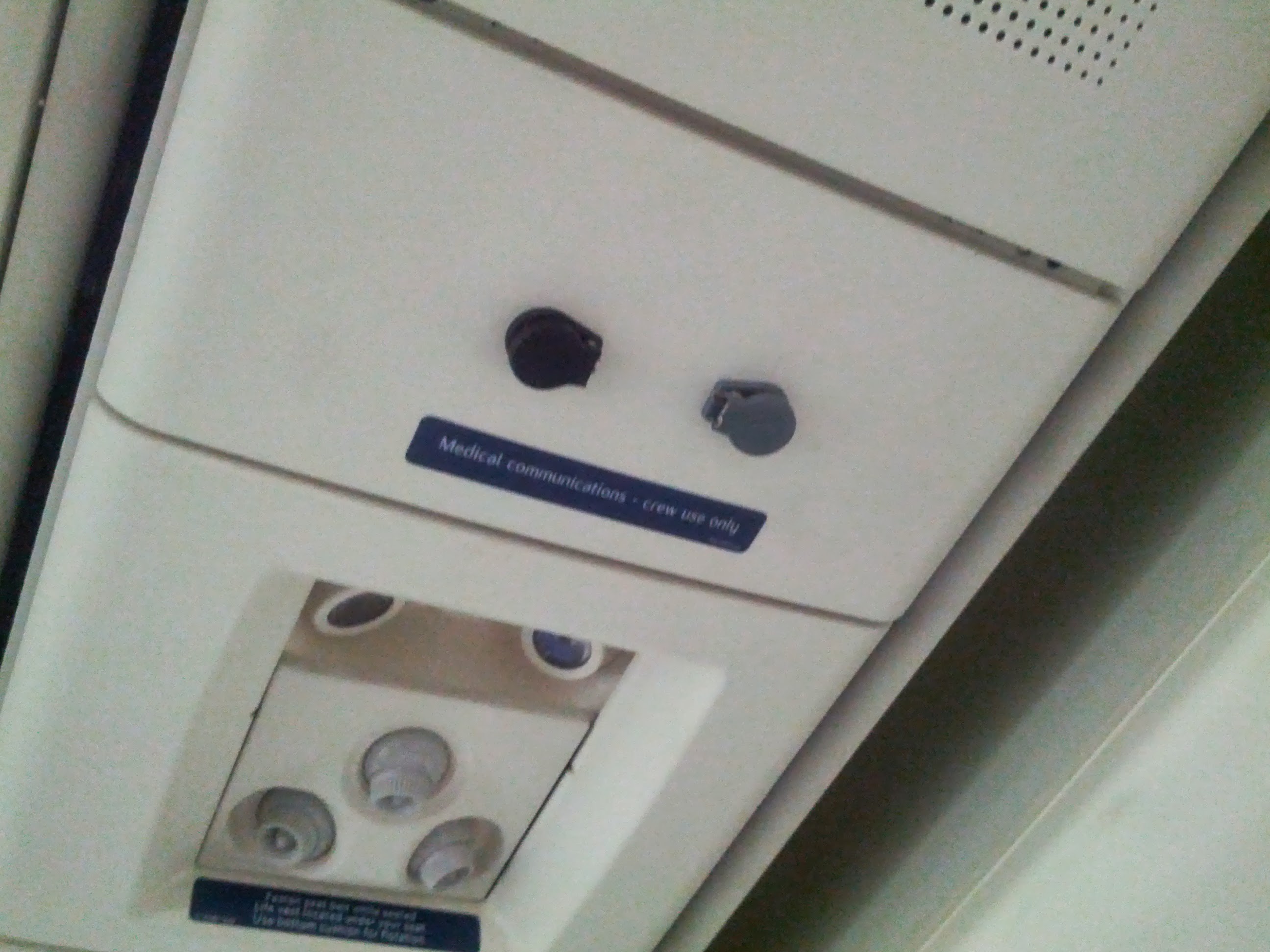 As other have mentioned, these are generally connections for a standard aviation headset (headphone and microphone plugs). When plugged in you're typically connected to the cockpit (so the pilots know what's going on), and on commercial airlines you may also be patched in to a medical consulting service via radio.

The principle behind this is similar to the early paramedic programs in the United States: Personnel with some basic training (like flight attendants) are connected to a doctor. They describe the patient's condition and symptoms, and the doctor advises on a course of treatment, which can begin immediately and hopefully give the patient a better chance of survival.

The radio patch can also be used by a doctor onboard the aircraft to consult with other physicians and to help the flight crew arrange for appropriate transport services to meet the plane when it lands.

To answer your questions:

The headset allows the steward to talk on the aircraft's common channel which the pilot can connect to any radio frequency. Normally the steward will be talking both the captain and possibly to the tower of the arrival airport. The tower can patch in phone lines. So, if necessary, the tower can telephone a doctor, then patch in the doctor to the frequency.

In most cases the comm link is just to make sure that arriving emergency personnel have the right information. For example, what might happen is the following:

This is just one scenario, but it is typical. Basically one person relays information to the next and the steward is the first link in that chain.

To answer your second question: aviation headsets have two ports: one for the earphones (listening) and the other for the microphone (speaking). The plugs are designed for ruggedness and reliability and are 1960s technology. In theory a more convenient duplex plug system could be used, but out of conservatism that has not happened yet.

Not the answer you're looking for? Browse other questions tagged safety emergency medical emergency-services headset or ask your own question.

17
What happens if a passenger dies mid-flight?

16
Under what conditions are passengers required to take precautionary measures during refueling?
3
What are the minimum requirements to pass the FAA medical exam?
31
What would have happened if the jet engine on my aircraft had ingested caulk from the pavement?
15
Is it a standard procedure to use emergency slides without imminent danger?
13
Would an A320 override the autothrottle due to an erroneous radio-altimeter?
32
How hazardous is it if an engine cowl falls off?
1
What are the eyesight requirements for a medical certificate in India?
2
Has a passenger or cabin crew member ever flown an airliner?
14
Who decided that the Boeing 737 MAX planes that were airborne when the grounding was issued cannot enter and land in EU air space?