What aircraft can make these sharp 90-degree turns?

I took this photo when I saw a plane make a crazy 90 degree turn. What kind of aircraft could do this? I have a plane finder app for commercial aircraft and this plane did not show, which is the first time that's happened. 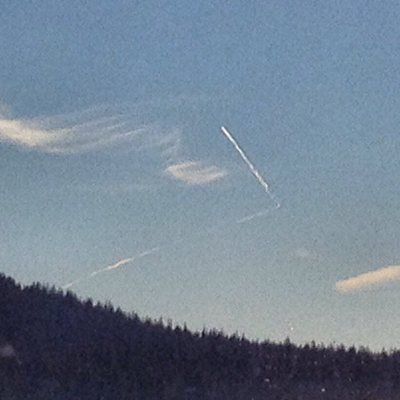 It looks like a 90 degree turn, but it isn't. You're not looking vertically up at it; you're looking at a fairly shallow inclination, maybe only 20 degrees elevation at the corner of the turn. It means that the actual course change is probably only about 20 or 30 degrees, and just looks like more because of the optical effect of foreshortening. As for the aircraft, pretty much anything capable of flight at high altitude - probably 30,000 to 40,000 feet - any jet airliner or many business jets.

We looked at how tight a turn a Boeing 747 can make in this question. The answer gave a radius of just 6.11 km.

Your contrail photo clearly shows that the airplane has either one or two fuselage-mounted engines. The 747 was assumed to have a limit of 1.5g for the 6 km turn, but if the aircraft in your photo has a higher buffet and airframe limit, much tighter turns would be possible.

If your airplane was traveling at Mach 0.7 in FL300, its speed would have been 212 m/s. Let's further assume it could pull 3g at this speed and altitude, and your turn radius becomes 1.624 km or just about one mile.

It is very hard to judge the radius of the contrail's turn section, but it is quite easy to list the characteristics which help to make the radius small:

One could add the capacity to fly high enough to be able to form contrails, but this is already implicitly contained in the other conditions. We need something with big wings and a powerful engine - a lightly loaded fighter aircraft in other words.

As we do not know which airplane were you observing and neither the airspace it was moving in, one possibility, aside for military aircrafts, it could be that it was an acrobatic one, maybe training on specific maneuvers. 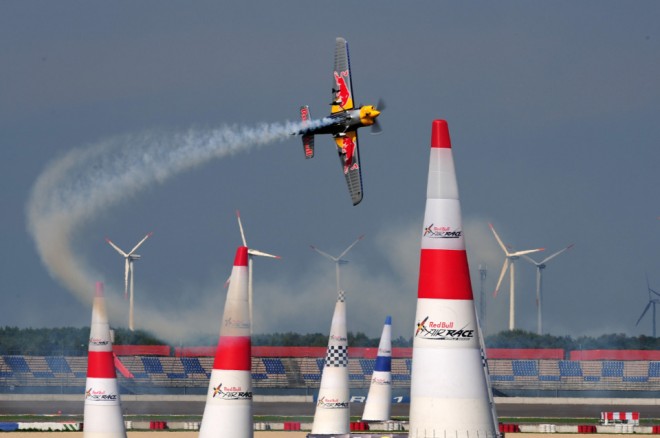 Such a turn from a long distance could look like it is seen in the photo you posted.

As Federico said, there is definitely a possibility of an acrobatic or stunt aeroplane, and the first thing that came to my mind when I saw this picture was an Extra 300S. The contrail looks to me like more of a smoke trail (Extra 300 series planes are usually equipped with smoke generators), as towards the beginning of the line the trail seems to be 'bunched up', or wavering. Also, a couple hundred feet (at best guess) from the turn, the line shifts, possibly as a result of wind shear and/or turbulence.

8
Where does the flat plate theory in this paper come from?
10
What is the purpose of those casing treatments and how were they designed?
1
What education is needed to become a civil pilot?
4
Documentation about “drag stabilized flying wings using non-reflex airfoils”?
1
Would it make sense to test the performance and handling of a prototype aircraft by mounting a free moving mock up on a track (like a rocket sled)?
7
What costs less energy? Roll or Yaw?
1
How do power and thrust curves compare?
3
What are “secondary precessional forces” that apply to boomerangs in flight?