Why is vertical take-off restricted to lighter weight aircraft?

Vertical take off is a big advantage, but why it is only limited to low weight?

Essentially it comes down to supersonic rotor tips

With a helicopter, we're limited by the rotor tips: once they go supersonic, they cause a lot of problems.

So how does a helicopter produce lift? By using rotors to push air down within a kind of circle. To add more lift we can do (essentially) three things.

There are other slight modifications we can make, such as the airfoil of the rotor, but they don't add significant gains

So, basically, we've hit the limit of what we can lift with a single rotor, The only real way to add more lift now is to add more rotors: doing that would be far less efficient than simply using an aeroplane.

Which brings me to the final point - helicopters are very inefficient and pretty slow... We simply don't need, except in a few niche circumstances, to carry more weight with them.

but he misses one important point: helicopters are also incredibly fragile and delicate. Even a regular single-rotor helicopter flying is a miracle. It's been called: "10,000 spare parts flying in close formation."

You could add more rotors to gain more lift, the Chinook has two rotors which is part of why it can carry so much. The rear rotor adds complexity but also removes the need for a tail rotor, which is why it isn't quite 20,000 spare parts flying in close formation. But even Chinooks are fragile compared to C-130s.

Adding engines adds redundancy in a plane. And remember that if you are in a plane and you lose an engine (or all engines) you can still fly or glide to a safe landing.

If you are in a rotorcraft and you lose your engine (either main rotor or tail) or really any single part of those 10,000 parts, then all you can do is pray and try an auto-rotation landing. It gets worse the more rotors you add, not better. This is one of the limitations of rotorcraft and why you for the most part only see multiple rotors (4-, 6-, 8-) used in unmanned drones except for some very experimental vehicles.

For a helicopter to take off vertically: $$Lift \gt Weight.$$

More lift means higher lift coefficient and more rotorblade planform area. The maximum cirumferential speed at the blade tips is limited (there's the constraint that the tips can't move at supersonic speeds). One would need stiff longer and trapezoidal blades and there is a structural limit to the possible torque on the blade root.

Aircraft that cruise at high subsonic speeds exprience the same airspeed at any portion along the wings, unlike a helicopter that has a $v=r \omega$ relationship for the speed along the rotor blade. $v$ is constrained to subsonic speed.

The power required to maintain altitude at forward flight is lower than the power required to hover. As horizontal velocity ($V_x$) increases, the induced velocity ($V_i$) at the disc decreases, and induced power ($P_i$) decreases roughly equal to $\frac{1}{V_i}$. However, as $V_x$ increases, parasitic power ($P_p$) increases proportional to $V^3$. Profile power ($P_0$ - the power needed to maintain rotor speed) remains roughly constant. If you chart all of these together with Required Power on the y-axis and forward velocity on the x-axis, you end up with something that looks like this: 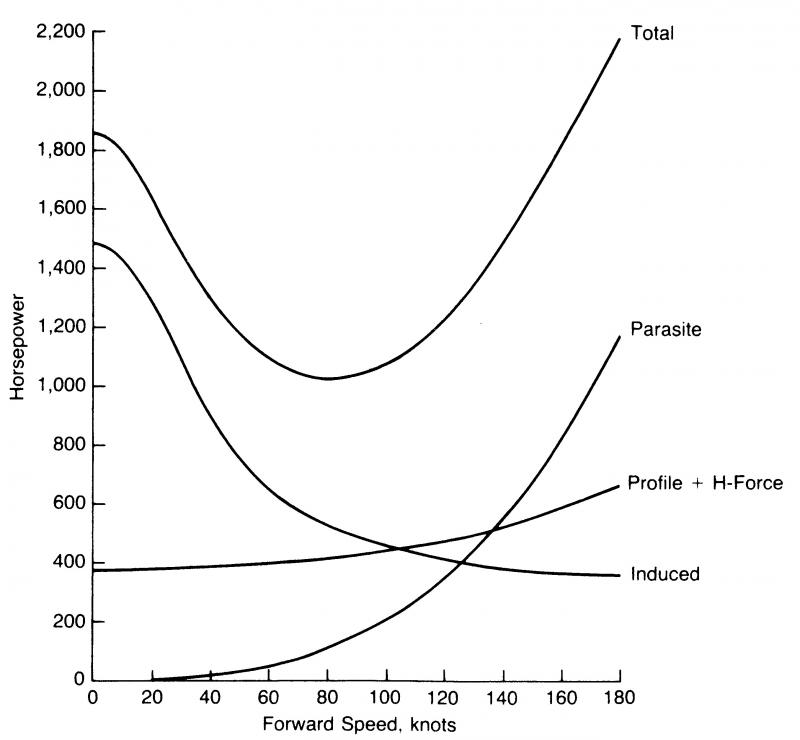 What this means is that there's an optimum forward speed at which your power is minimized. This is important, because the max rate of climb (and lifting power) is determined by your available power $$P_{av} = P_{tot} - P_i - P_p - P_0$$. If you minimize the power needed to keep the aircraft flying, you have more net power for lifting other things (and for heavy helicopters, they may not be able to take off vertically at all). For this reason, the max rate of climb will always be at some forward speed, and by definition, the max lifting capacity will also be at some forward velocity. A practical demonstration of this principle is that large cargo lifters like the sky crane and the chinook always take off with some forward velocity component. This is why.

In addition to the power-to-weight ratio - already aptly described above - I bluntly strike at the economic reasons and cite that bean-counters look at the cost-per-takeoff and shake their head.