What is the "departure cable" that tower mentions?

Sometimes the tower will advise aircraft that the "departure cable" is up or down. What are they referring to?

KPDX is one airport where this can be found.

Fighter jets tend to take off and land at higher speeds than other aircraft, and don't have the same braking power that other jets do. The speed brakes may not provide substantial drag, and the engines typically do not have reverse thrust capability. Since there is more room on a runway than on an aircraft carrier, land-based systems take more distance to stop aircraft.

The system is not used for every landing, but is useful to have in certain situations. For normal landings or aborted takeoffs, the system on the departure end will be used to prevent a runway overrun. If an aircraft needs to make an emergency landing, it will use the system closest to the approach threshold. Some cable systems are able to retract into a recess in the runway when not in use, which prevents issues when aircraft roll over it.

When the system is deployed in normal use, the tower will advise aircraft that the departure end cable is up. The departing aircraft will generally be in the air by the time it reaches the cable, but in case of a late rotation or aborted takeoff, the pilots can anticipate running over the cable.

Arresting gear is indicated on the FAA airport diagram as follows:

The cable is marked by 10-foot diameter yellow circles on the runway. 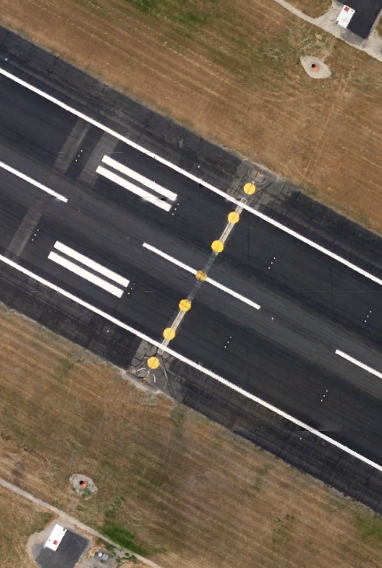 Not the answer you're looking for? Browse other questions tagged air-traffic-control runways arresting-gear or ask your own question.

15
Why isn't the arresting hook always used on land?

20
How does having multiple ATC towers affect airport operations?
11
Who assigns an arriving aircraft a runway and runway exit to use?
18
What is the maximum number of planes a controller can control?
8
Is it fact or fiction that Ashgabat control tower is misplaced?
8
What do tower controllers do when the airport is quiet?
4
What is the correct name for clearance delivery at KSAN if the tower is called "Lindbergh Tower"?
2
What is the correct ATC phraseology for tower to clear a practice approach?
8
Why did the tower at a Class D airport not set me up with flight following on the ground?
19
Should I wait for Tower to provide runway exit instructions?