Is there any application where the crescent wing would be the best wing planform?

To my knowledge the only aircraft featuring a crescent wing that was built in numbers was the Handley Page Victor.

You are right, it helps to de-sweep the outer wing. The main advantages are (read this Flight article from 1965 here for a much more detailed explanation):

However, as long as wings are made of aluminum, the manufacturing effort is significantly higher.

The basic problem is the needed two-dimensional bending of the skin panels. Using a straight spar line and a straight leading edge requires bending only in one dimension, but when sweep changes, the skin panels would need to stretch in some corners while being bent. This requires much more expensive tooling, or a break in the structure which increases structural mass.

Even one composite wing I know of has a straight leading edge, even though the aircraft would have benefited from de-sweeping. Both the TKF-90 and the X-31, which were designed by the same people before, had reduced sweep on the outer wing, and for good reason. When the multinational project started and they talked to the BAe engineers, the British side insisted on a straight leading edge for easier manufacture, ignorant of the fact that using composites made their point moot. Yes, that was practically the same company that had built the Victor before.

Another disadvantage is the fact that any sweep change will convert bending moment into torsion. Normally, this reduces the incidence of the outer wing when a swept-back wing is bending under lift loads. De-sweeping the outer wing will introduce an uptwisting torsion which can cancel the torsion from sweep-back, and Handley Page claimed that the Victor wing was close to aero-isoclinic. However, this reduces flutter damping, resulting in a lower wing flutter speed (PDF!). If the wing's aspect ratio is low, this is manageable, but with higher aspect ratios the wing needs to be stiffened.

To answer your question directly: In the majority of cases it is aerodynamically advantageous to vary sweep with relative thickness, but it is not structurally and economically efficient. In the delta wings of combat aircraft which need to operate over a wide range of angles of attack, de-sweeping the outer wing produces indeed the best wing planform, even when economics is included. 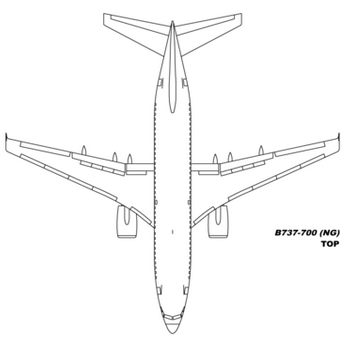 One of the reasons the Victor engineers chose this was that the more extreme sweep angle enabled the design team to house engines and landing gear near the wing root since they could make that section fatter without incurring additional drag. This video ("The Crescent Wing" - Handley Page Builds the Victor V Bomber) explains some of the science behind it, plus a good explanation of stall conditions as they develop based on different wing geometries.

The most probable cause for non-development in this arena is because it's more expensive to fly faster. As noted in this question, Mach 0.8-0.85 seems to be the sweet spot. And on that subject, Peter's answer has a good idea why.

4
Why don't airliners use crescent wings?
68
Are we at peak speed efficiency for jet airliners at Mach 0.85?
9
Was the B727's wing supercritical (even if not so designed)?
5
Why is it advantageous to vary sweep angle with relative thickness?
2
Why does the effective alpha/CL increase at wingtip of swept wing?

16
How would an Inverted Delta Wing planform behave, Straight part forward? Are there wings shaped this way?
12
What are the pro/cons of polyhedral cranked wings?
16
Why did the Avro Vulcan use a delta wing?
9
If no low-speed compromises were made, what would an ideal Mach-3 wing look like?
5
Where can I find a cross sectional area plot for the A320 or other modern airliners?
7
Could Mach 1.4 be a better design point for SST?
30
Would an 8% reduction in drag outweigh the weight addition from this custom CFD-tested winglet?
29
Why do most airliners have underwing engines, while business jets have rear-mounted engines?
2
Why did the DC-3 have a much higher cruise speed than the HP.42, despite their similar weight and power?