Why does afterburner exhaust have “pulses”?

Instead of being consistently-dense, the afterburner exhaust looks "pulsed" in these pictures below. Is this a trick of the camera, a natural result of interaction with the air, or is there some design science in the propulsion system that causes this effect? 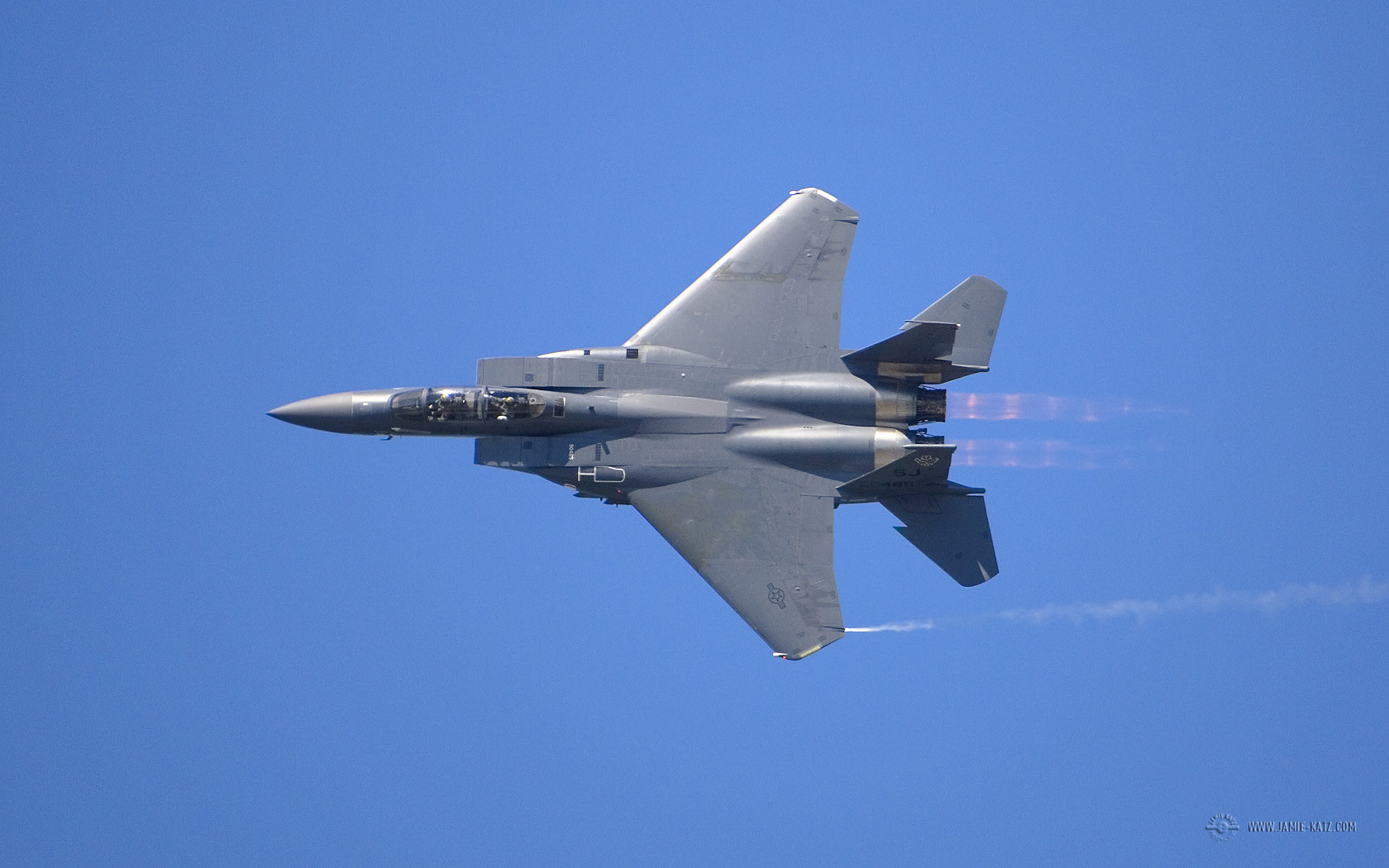 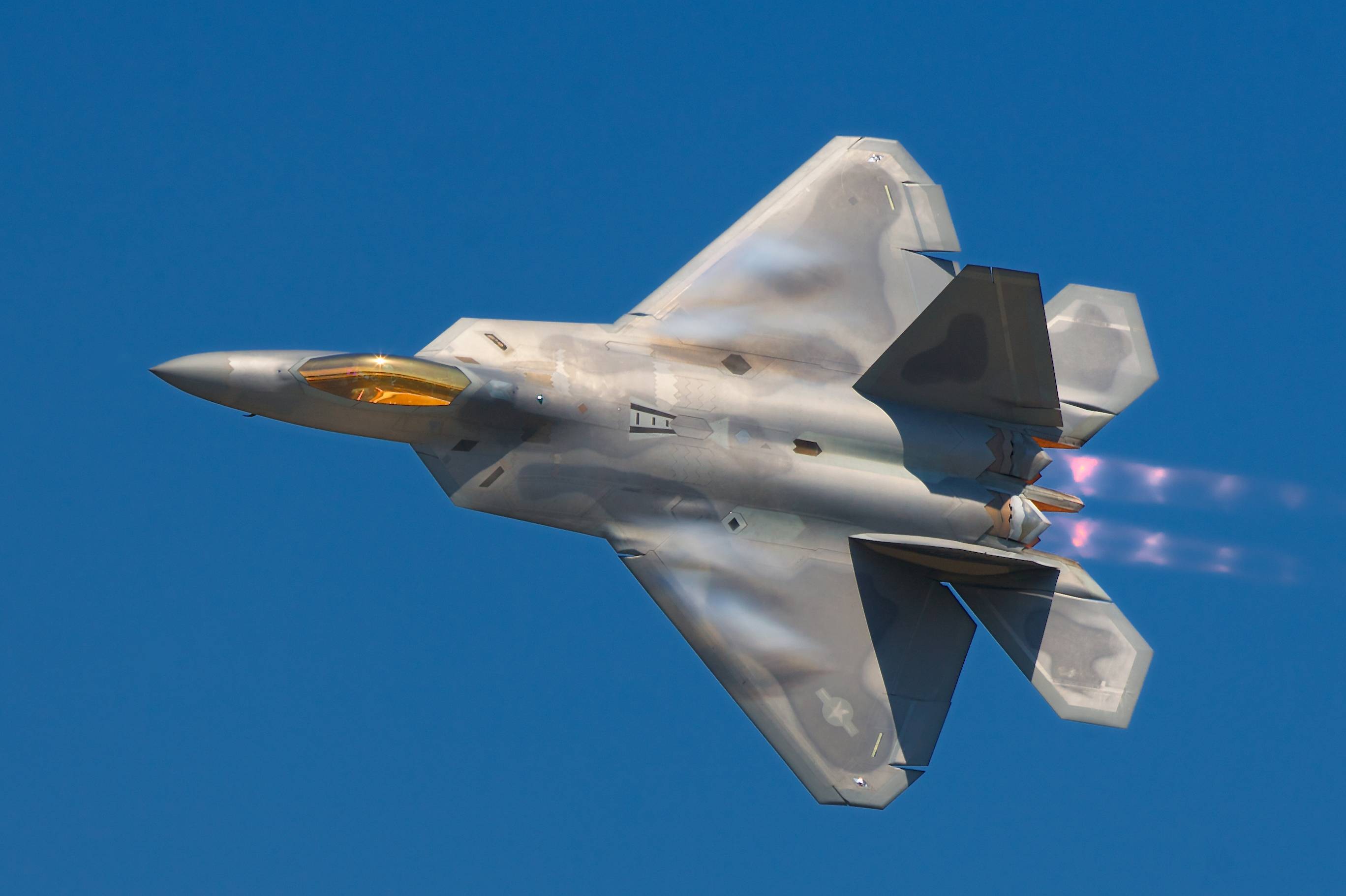 Those are known as "Mach diamonds" or "Shock diamonds" (and a number of other names) and are not a characteristic of the afterburner per se but are formed by standing waves in the exhaust when the pressure of the expanded exhaust gases do not exactly match external ambient pressure. They can be formed by either over-expansion or under-expansion of the exhaust gases. The diamonds form at the transition from sonic to supersonic flow which occurs immediately on the "downstream" side of a rocket or jet engine nozzle.

In rockets, flow through such a nozzle is always sonic at the throat (in all except trivially low pressure systems where it can be subsonic - but these are not usually encountered in practice.

In jet engines, whether flow is sonic or supersonic at the exhaust depends on the design which in turn tends to depend on the application. "Pure jet" engines which use a combustion driven compressor to compress input air and which develop their thrust from the jet exhaust will usually have supersonic exhausts. Ongoing development has led to a range of "jet" engine types with somewhat differing capabilities - turbojet ("pure" jet), turbofan (jet driven internal "fan" produces air which partially bypasses jet proper), turboprop (jet drives external propellor),propfan (turboprop on steroids optimised for close to Mach 1 cruise) and some fellow travellers such as turboshaft - like a turboprop but with shaft output - useful if you want to power eg a helicopter.

In a turbo-fan engine the amount of air which bypasses the jet engine proper is governed by the "bypass ratio". High bypass engines send most air past the jet proper to be combined with the jet exhaust and form the actual engine exhaust. Pure jet or some "low bypass ratio" turbo fan engines may have supersonic exhausts while "high bypass ratio" turbofan are always subsonic. Modern long distance aircraft (especially airliners) which aim for maximum fuel economy tend to have high bypass ratios. As Mach diamonds are only associated with trans-sonic operation you will not see Mach diamonds from eg a 747.

So, low bypass fanjets may have supersonic exhausts for part of their operation. A turbojet may be sub or super sonic and afterburner will almost always (but not necessarily in theory) produce supersonic outlet flow.

In systems which do have supersonic exit exhaust velocities, as the flow changes from sonic at the nozzle throat to supersonic in the expansion system the aim is to make the exit pressure exactly match ambient. "Exactly" never exactly happens in practice. Where the mismatch occurs there will be a shockwave - an "impedance mismatch in another perspective - and the visible evidence of this are the Mach Diamonds.

As both exhaust pressure and ambient pressure change with conditions there will essentially always be some degree of such shock waves present in "qualifying" systems, but more so when the engine operation departs more significantly from the ideal. Smaller versions may not be obvious without careful examination. As the overall system is usually optimised for "normal" conditions, afterburner operation is more likely to cause a major pressure mismatch as it deviates from normal use.

An exception would occur if the designers decided they wanted absolutely maximum performance from afterburner under given conditions (so that eg an interceptor could achieve absolute maximum velocity when needed) - in which case the Mach diamonds could be minimised on afterburner and would be more pronounced in normal operation.

See this page for some good photos and the diagrams below -

Below: creation of Mach Diamonds from over-expanded flow. 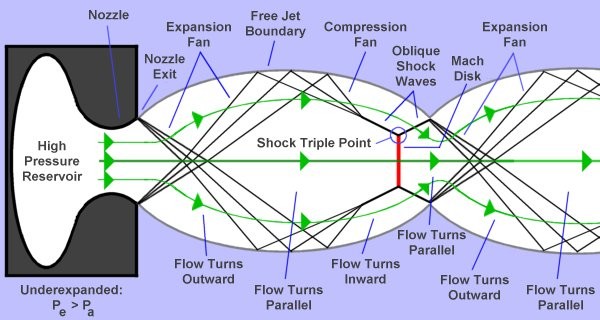 Below: - creation of Mach Diamonds from under-expanded flow. 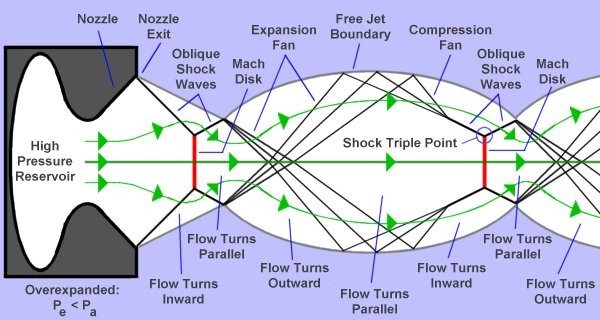 Numerous relevant images - each linked to a related web page.

to occur. Normal jets have subsonic exhaust speeds, and only the convergent-divergent nozzle of afterburning engines can produce the supersonic speed required. Inside the nozzle the air is accelerated by converting pressure into speed in a diffusor, the last part where cross section increases downstream.

Remember that supersonic gas has no means of being influenced by what happens downstream. In the nozzle it is easy to accelerate the exhaust gas so much that its pressure drops below 1 bar - just make the end cross section of the diffusor wide enough. When this low-pressure, supersonic jet leaves the nozzle and is confronted with ambient air, the air pressure will compact the jet. This can be seen very well in Russel's lower picture: A shock will form from the circumference of the nozzle and produce a cone which separates the low-pressure core of the exhaust gasses from the downstream section which is affected by air pressure.

Now something interesting happens: When the shock waves meet in the middle, the get reflected outwards, and what follows is a sequence of inward- and outward-traveling shocks which form this distinct diamond pattern. That it is visible at all is due to the carbon atoms in the fuel which glow orange because of their heat. The compression shocks originating from the circumference of the nozzle are reflected at the center, turning into expansion fans when reflected at the boundary of the hot exhaust gasses and ambient air, and become compression shocks again when reflected at the boundary the next time. The compression will heat the flow, igniting remaining fuel and thus intensifying the glow of the carbon atoms, and the expansion will cool it, so you see alternating patterns of bright and dark, separated by the oblique shocks.

The same happens with rockets at lower, high-density altitudes. Rocket designers have to find a compromise between small, lightweight nozzles which have a high exit pressure (and waste some of the energy in the rocket fuel by not accelerating the exhaust gasses as much as possible) and bigger nozzles which also have lower exit pressure than 1 bar. If the nozzle is optimized for higher altitude and over-expands the exhaust gasses when operated closer to the ground, the same shockwaves become visible. The picture above is from Copenhagen suborbitals.

Not the answer you're looking for? Browse other questions tagged jet-engine military engine or ask your own question.

1
Reason behind formation of Mach rings
24
Why are adjustable area jet engine nozzles mostly limited to military use?

33
Why do we never see high-bypass turbofan engines sharing the same nacelle on large airliners and similar aircraft?
12
Compressor-Turbine: Why a shaft and not kind of a “rotating drum”?
40
What is some of this extra “stuff” on jet engines?
8
How is bleed air used to start a jet engine?
4
How does engine exhaust temperature affect contrail formation and why?
5
How does the nozzle diameter affect the thrust of a ducted propeller?
2
Bright exhaust in afterburner vs no visible (bright) exhaust when not in afterburner?
5
Why Western fighters' afterburner glow is reddish orange while Eastern Bloc fighters' is blue?
31
Why don't modern jet engines use forced exhaust mixing?