Can you fly an airplane at a 90° roll angle without losing altitude?

I've seen this answer to the question about flying upside-down, but tilted by 90°, there should be no surface creating lift (except maybe the vertical stabilizer).

It depends. As always. If thrust is high enough, why not?

Knife edge flight is a regular part of aerobatic performances, and the fuselage is producing almost* all the needed lift. This requires

For horizontal flight your installed thrust must be sufficient to compensate for the high drag in this attitude. This should be no problem with powerful propeller aircraft if their fuel system keeps them supplied at this attitude. Jets must make sure that the sideslip angle can be tolerated by the intake. 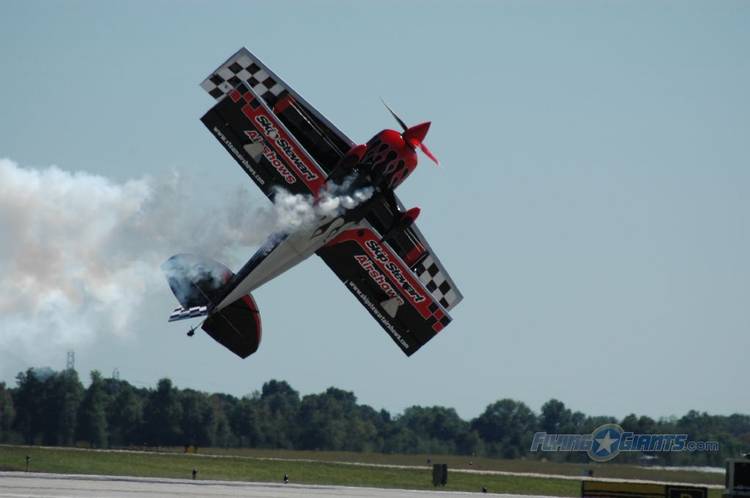 The smoke from the exhaust indicates that this biplane flies horizontally. Yes, it is a large model airplane (not man-carrying, but almost big enough for that). But the laws of physics don't change with scale. For an example of a full-size aircraft doing a knife edge, see this video. Thanks go to @romkyns for pointing this out to me!

Note the rudder deflection to keep it at this angle of sideslip. Direction is controlled with the elevator. At this rate of sideslip the propeller thrust contributes to overall lift as well, however, the vertical adds a substantial downforce in order to trim the aircraft and the fuselage has to supply the remaining lift.

* Almost means that the propeller will carry some of the weight, but the large downforce on the vertical needs to be compensated, too. In sum, the lift contributed by the fuselage is very close to the weight of the plane.

Regular airplanes, no. They depend on lift produced by the wings and fuselage to stay airborne. No aircraft that I know of can produce enough lift with its component tilted 90°.

This all assumes 'normal' airplanes though. If you have enough thrust, there's nothing that says you need to depend on wings for lift, and if your thrust is vectored at least a little downwards producing enough of a vertical component to keep you from descending, it won't matter which direction anything else is pointing. The extreme example of this is of course space rockets.

This happens (for several seconds at a time) as part of the "hesitation roll" aerobatic maneuver.

It depends on the fuselage alone for lift (in excess of the vertical component of thrust), so the nose has to point into the sky and the rudder is used to maintain that attitude. Because fuselages have rather dismal L/D it will require sufficient thrust, or bleed off a lot of speed.

During "normal" flight with wings level, the amount of lift generated will vary with the wings angle of attack (alpha). Within the normal flying envelope of the aircraft, the relationship between lift and alpha will be nearly linear.

In an ideal situation, with symmetric airfoil and not considering fuselage/slipstream effects, at zero degrees alpha, no lift will be generated.

There sideslip angle of the aircraft is normally called beta. In normal straight and level flight this is near zero, as no sideways lift is desired.

If you roll the aircraft 90 degrees and maintain it, you can with an alpha near zero and a sufficiently high beta angle generate sufficient sideways (now directed skywards) lift to maintain level flight, if the shape and size of the fuselage allow this. (This is the knife edge maneuver illustrated by the picture in Peter Kämpfs reply).

Aerobatic aircraft can be designed for this. Some aircraft might be able to maintain altitude momentarily in knife edge, but will be unable to maintain the relatively high airspeed required to do this, and will eventually start descending.

We do that all the time with our radio-controlled airplanes. It's called a knife-edge maneuver. Maintaining altitude is easy provided you have enough power and rudder surface area, but maintaining a straight line (with elevator) is usually very tough.

Not every radio-controlled aircraft can do it though. Usually the planes with small rudder deflection cannot hold altitude if their surface area is small. Aerobatic ones can do it all day along. In fact, an elegant way of coming out of this maneuver is to climb up at the end in that same orientation.

During this maneuver the nose of the airplane will always be a little higher (hence in a pitch up attitude) than the tail. I don't see anyone doing it without pitch up and still maintaining the altitude.

Not really all that complicated. It all depends on if the specific airframe is designed for such maneuvers and the power plant is robust enough for sustained operation in this mode of flight. MANY aircraft can sustain flight in horizontal flight with the wings 90 degrees to the ground. The Navy's Blue Angels and the USAF's Thunderbirds do this on a daily basis at their airshows. Moving an airfoil to 90 degrees, 180 degrees, 270 degrees, or even through 360 degrees (barrel roll) is accomplished through the wings ailerons. Most aircraft capable of aerobatic maneuvers have trim tabs on ailerons, rudder and elevator to assist in prolonging such maneuvers. Although most light aircraft do not have trim tabs on the rudder and elevator.

I have witnessed a Pilatus Porter (Fairchild) take off near vertical with less than a 40 foot ground roll. Granted it was stripped down and supercharged but it performed as advertised. I think there was a Youtube type video on this out there somewhere at one point. The demonstration was performed by the US Army in the 1970s.

Only if there is a force vector component pointing up.

Model planes tend to have a large rudder which provides lift when turned 90 degrees. Fighter jets have vectored nozzles that can turn to provide lift in a 90 degree maneuver.

Not the answer you're looking for? Browse other questions tagged aerodynamics aerobatics or ask your own question.

0
How long can an aerobatic (or any) plane fly "on its side"?
1
Flying sideways, how is it done?
20
Can a plane bank without turning?
27
If the profile of a wing pulls a plane up, why can planes fly inverted?
15
Why would a plane descend rapidly in uncontrolled manner after a steep turn?
10
Do auto-flaps exist?
10
How is rudder used in a aileron roll?
7
What is the Keel Effect?

9
Do most commercial jets have a negative lifting body?
4
What factors determine the direction of the resultant force vector?
8
What prevents BFS from becoming unstable when pitching from horizontal to vertical?
6
Does flying an airplane upside down imply negative AoA? Why?
3
Why don't aircraft owners put vortex generators on the top of their flaps to extend single flap lift creation past 40 degrees?
4
How do you maximize lift while keeping span as short as possible?