What are the busiest airways?

Wikipedia lists the busiest city to city routes. But for instance (nb: this is purely speculation), flights originating in Boston would transit through much of the same airspace to get to LA as a slightly shorter flight originating out of DC.

What are the busiest actual air routes (airways) (irrespective of origin/destination cities)? Total aircraft count, as well as passenger- and cargo-based metrics appreciated.

The best map I've found so far came from this joint publication comparing the US and EU in air traffic management, but this does not show traffic flow between areas:

As originally phrased, I realize such a graph could get very much "into the weeds". I'm rephrasing the question to start high-level and then work down (if possible).

For example, a flight from Tucson to LA involves a handoff from ZAB to ZLA, such that a numerical representation (aka directed graph) might look like this:

Adding flights from Tucson to Phoenix (within the same ARTCC) and from LA to Tucson would result in this:

Ultimately, this matrix would be 22x22, but since not all ARTCCs can handoff to all others, many cells would be zero.

You can use Flightradar24 which will shows air traffic in real time where you can check which airlines are the busiest. Flightradar24 is using the callsign of the flight and compare it with big databases of airline and airport schedules to find the matching flight number, so not all airlines are submitting their schedules.

You can choose Airline fleet database in Data/History where you can check a comprehensive guide about the fleets of the world's airlines. Once you select an individual airline to view, you'll get its entire fleet. However it won't give you exact number, but list of all airplanes flying per airline (e.g. EasyJet).

To display the number, either you should request that information from the author of the site, or there are few workarounds.

Technical analysis of the busiest airline

When you open the page with specific airline (as suggested above, e.g. EasyJet), you can type the following command in JS console (e.g. in Chrome - More tools and choose JavaScript Console):

and it'll print you the number of flying planes (sometimes less, because of the pager).

Or use Yahoo Developer Console and type the following query:

And in Tree View, you'll see number of flying planes at the moment (e.g. count: 323) based on Flightradar24 database.

To combine all lists together, you need a script as below.

It will scan over 800 different airlines from the web and it'll print sorted list of the 20 busiest airways according to Flightradar24 database at the time of scanning. Tested on Linux and OSX.

Technical analysis of the busiest route

In order to calculate the busiest city to city routes, it's more complex that above example and you'll have to write similar script (or spreadsheet) of fetching all departures/arrivals of each airport (e.g. LGW) from available Airport database over world airports page, extract data from the tables, consolidate the airport/destination and sum it up in similar way.

Extraction formula which I've used to list all departures from London Gatwick in Google Spreadsheet:

So theoretically you can extract all departures of the airport per Sheet (it's like over 3000), group Destination (so you know at least the busiest destination per airport) and sum it up, do some consolidation between Sheets plus some magic, and viola. That's why it's better to write some script:) If I'd have too much time on hand, of course I could do it.

So in other words, the busiest air route would be the airport which will have the highest number of the same Destination city (if I'm correct).

You can always simplify the work by choosing top 20 airports to give you some idea how does it work (instead of checking all of them).

Maybe it won't answer your question directly (which route is the busiest), but it's an idea how to extract the data of the busiest airlines and similar statistics. As it seems it takes a bit knowledge and time how to do it.

If you find any easier way of extracting that data or different database, let me know:)

Summary of the busiest airline

So based on above data (and ignoring Airbus), it's:

The data is indicative and it depends on the time of day and week, so I'm not warrant of any correctness of it as this is only the example.

The question (as titled) may be impossible to answer, but here goes...

This may be the most intuitive answer of all: Look at a visual map of planes currently in the air.

Theory: What does the question mean?

Since in reality there is an arbitrary number of airways between two destinations, the question doesn't really make sense. Do we count two airways the same if they are parallel and 20 miles apart? Why or why not? It is simply an economic question at this point.

The busiest airway could be one in the 'middle of nowhere', but since it is the only one in its area it gets all the traffic.

Practice: What are the busiest airways between two destinations?

Flightaware will show you recently used IFR routes. Here is an example for traffic going from Seattle to Los Angeles. This gives a summary of how many times a particular route was used.

To find the busiest airways between areas of the country, simply count the number of times each airway was used.

You can obtain custom traffic reports through the FAA's Air Traffic Activity System (ATADS), specifically the Center Aircraft Handled page. There are options to break down traffic by a number of parameters.

I would suggest the following settings to get started: 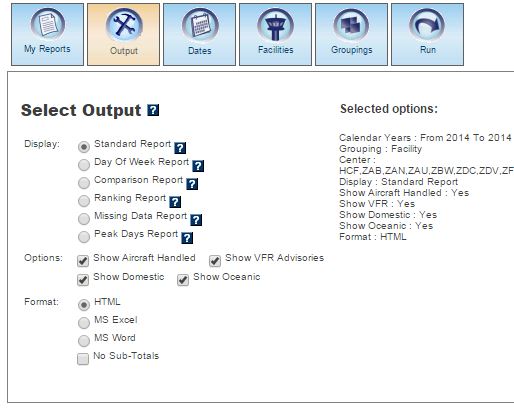 It sounds like you don't care about the Dates as much; I have selected 2014. 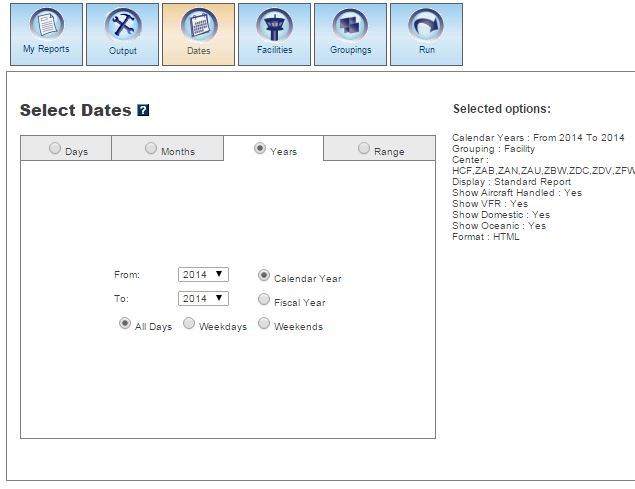 For Facilities, select all of the Centers. You have to individually check each one.

Under Groupings, select Facility only. If you add others there will simply be extra summary rows in the output.

Click run and enjoy the output. Then try different settings if you want.

Then you can branch out into Terminal operations as well.

Not the answer you're looking for? Browse other questions tagged air-traffic-control flight-path or ask your own question.

56
Why do pilots use airways instead of just "flying direct" every time?
14
Is there a difference between how commercial jets and GA aircraft use airways?
0
Is public data available for routes that enter/exit a certain airspace?

3
Where can I find the planned and flown paths for certain flight routes?
4
How is ATFM handled in the USA?
0
Is public data available for routes that enter/exit a certain airspace?
3
How to find past flight routes between 1977/82 Latin America and the former Soviet Union?
14
How does handover between Air Traffic Controllers work?
3
Why can’t air traffic control radars determine the altitudes of primary targets?
7
How unusual were MH370's final ATC exchanges?
8
What are the pros and cons of practising figure-eight landings on perpendicular runways?