What data is displayed on civilian ATC radar screens?

I am developping an ATC radar for a simulation.

There are a few different ATC Systems and Radar Screens being used throughout the world, so there will be no set standard which applies globally, as vendors and setup differ.

The ATC screen can be adjusted to show what information the controller needs, and some items are universal to all positions being served (Callsign, Speed, Altitude, Assigned Altitude), some items are not required on each position to be displayed on the radar tag (Squawk, Routing, Aircraft Type, Wake Turbulence Category). 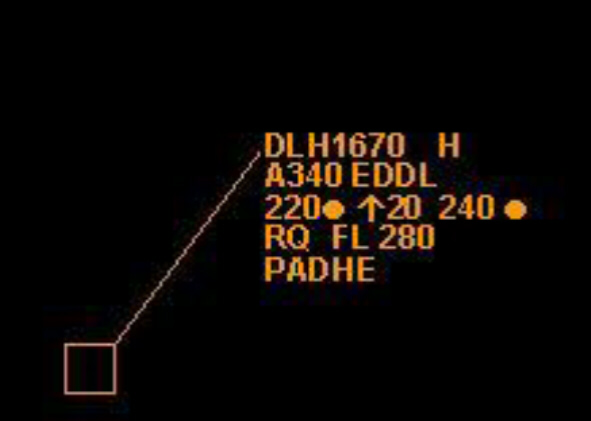 For example: VFR controllers, the ones that generally first comes to mind when we think of air traffic controllers, and who primarily direct traffic by looking outside through the tower's glass panes, work directly on airport fields. To assist them in times of low visibility, they generally rely on airport ground surface movement radar (SMR). This allows them to see a general layout of the airport, along with any moving vehicle, airplane or person. Data displayed includes raw digitized video, which is a graphical depiction of the radio wave bouncing off the object, (the blip we often see in war movies), along with an ID tag containing the object's velocity, direction, registration, etc.

The other other main branch of ATCs are IFR controllers. They work in enclosed buildings across the country, and need not be close to any airports. Everything they see and hear comes to them through radar and radio links. Their radar display clients do not show the layout of one airport, but rather a portion of an airspace they are responsible for, along with any routes and airways that cross them. Weather is also overlayed (cloud and storm formations), so as not to direct traffic in danger zones. Aircraft tags contain similar data, including transponder code, flight plan number, altitude, etc.

7
How does ATC maintain separation between aircraft flying at different speeds?
6
What kind of information is shown on airport surface traffic surveillance displays?
1
How does ATC radar display differ from military radar?

24
Which map projection is typically used on ATC radar screens?
1
How does ATC radar display differ from military radar?
3
Why can’t air traffic control radars determine the altitudes of primary targets?
4
What benefits does Automatic Dependent Surveillance bring to continental ATC over Mode S?
11
How is radar separation assured between primary and secondary targets?
7
How would an aircraft fly PIKES ONE departure procedure of Denver Airport?
0
Why can’t a single-fan-beam radar determine the elevation angles of its primary targets?
8
What kind of tools are available to an ATC handling traffic in the terminal airspace to predict aircraft trajectories?
2
What type of chart is displayed on ATC radar screens?