How does dropping ordnance affect the weight and balance of the aircraft?

During a mission, military aircraft often shed a lot of weight from takeoff to landing.

A cargo plane like the C-17 may perform a combat off-load while airborne.

Meanwhile, the aircraft I worked on in the army were deadlined whenever 1% of total aircraft weight was removed, requiring either the part to be reinstalled or a total reweigh prior to next flight.

Operationally speaking, how are these "fat burning exercises" completed without jeopardizing crew and equipment due to shifting weight and/or CG?

the aircraft I worked on in the army were deadlined whenever 1% of total aircraft weight was removed, requiring either the part to be reinstalled or a total reweigh prior to next flight.

That's for internal equipment, which will affect the empty CG data.

All aircraft lose weight during a trip. Aircraft designed to lose a lot of weight all of a sudden ( C-5 airdrops, B-52 carpet bombing ) have the details and limits calculated during the design. In the case of bombers, the ordinance will be hanging near the wings and will have a specific release order, usually back to front.

A tailgate aircraft dropping something will also have very specific procedures based on the weight of the pallet going out the back door. If it's delivering pizzas the procedure is along the lines of "whenever, dude". If it's a tank, it has to be positioned and locked down until the moment of release.

The above is very noticeable by the flight crew.

If the load stays (or gets stuck) on the back ramp, you're usually done. I used to skydive - 10 people on the back end of a smaller tailgate like a Casa can and do cause the plane to stall. The rules were stay at the front until it's your turn, then position and exit in a prompt manner. If the buzzer goes, let go NOW. Unlike a cargo plane, jump planes have 12,000 feet to recover from the stall.

First, let's agree that when we say CG we're talking about the longitudinal CG, not the lateral or vertical CG.

Every aircraft has a basic operating weight, typically abbreviated b.o.w. or just BOW. The BOW is the empty weight of the aircraft + the required crew + undrainable fluids. For this BOW there is a known CG. The BOW and it's CG are the base values from which further calculations proceed. If you add or remove a part of the aircraft, you have changed the BOW and its CG, and even though the change may be small, it's important to recalculate the new BOW and its CG because you now have a new baseline. If you later load the aircraft right up to a weight limit or against a CG limit but use an old baseline rather than the new one, you may exceed weight or CG limits or both.

So now you load the aircraft: passengers, cargo, fuel, armaments, whatever. Let's say one of the items is the 2,000 lb bomb referred to in a previous comment. If that bomb happens to be right on the CG, when you release it your weight drops by 2,000 lbs, but your CG will not have changed. If, say, the CG of the bomb was 10" forward of the CG of the aircraft + the bomb, when you release the bomb you will change the CG moment by 20,000 inch-lbs. The usual convention is that forward is negative, aft is positive, so you would have incurred a -20,000 inch-lbs movement. As long as the resulting CG is still within the forward and aft limits, all is well, but you'll need to trim out your increased pitch because your CG has moved aft.

Let's say you're doing an airborne offload of a large truck out of a C-17. Further, let's say that just prior to the drop your CG is close to the aft CG limit for normal sustained flight. When you drop the truck it has to move to the rear before going out the back, but that happens quickly and you have enough airspeed that the elevator can counter the momentary movement of the CG past the normal aft limit for sustained flight. If the truck should become stuck just before dropping, you'd have a serious problem. See the Bagram 747 video for what happens when a vehicle shift in flight puts the CG way aft of the limit.

It really depends on the aircraft. Your F-15C as an air superiority fighter would primarily carry missiles; it can carry four AMRAAMs or Sparrows underbelly (the Sparrow's been all but phased out of the arsenal, but was a common loadout in the F-15's heyday) and four Sidewinders on the sides of the wing hardpoints, with either an additional pair of AMRAAMs or Sparrows on the bottom of the hardpoints or two 600-gallon droptanks (useful for extended CAP missions). That's in addition to 650 rounds of Vulcan 20mm.

These missiles are fairly lightweight; each AMRAAM only weighs about 340 lbs (compare to 500, 1000, 2000 or even 5000-lb bombs), to total no more than about 3500 lbs total ordnance weight when loaded for a "scramble interceptor" profile (get in the air quickly, target the enemy and if they close within X miles, fire at will). It's counterproductive for a plane designed to dogfight to be hampered by heavy munitions (when the F-15 was first designed, the aim was a pure air superiority fighter to combat the perceived threat of the MiG-25, and the mantra was "not a pound for air to ground"). Thus, the primary change in mass and balance during a mission is fuel. If the loadout includes droptanks, they'll be consumed first, as they can be jettisoned when empty (or if an aerial threat closes to dogfighting range or a missile is launched) and even if kept for re-use, draining them first increases the aircraft's roll rate faster in preparation for mixing it up.

The F-15E ground strike variant is a similar airframe with a very different mentality; the aircraft is able to lift a whopping 49,000 lbs of combined fuel and ordnance. It was designed to replace the F-111 Aardvark as a light penetration fighter-bomber for long-range precision strikes on hardened targets using large laser-guided bombs (missions that generally call for a "one pass and haul ass" mentality by the crew), but the Strike Eagle has also been used for SEAD, tank-plinking and other missions generally requiring more total "drops" and thus a more gradual change in aircraft weight and balance.

The performance and handling of the aircraft during ingress versus egress is usually totally different. Enroute, a plane full of fuel and ordnance is a slow, lazy-feeling thing that's really hard to maneuver. By the time you make your approach, though, you've burned over half your fuel, and even with the heaviest bombs this thing can take, fuel is still the majority of the aircraft's max take-off weight. When dropping Mk-82s or laser-guided variants, they typically have to be dropped in pairs; the plane just isn't stable with a one-ton imbalance between the wings (I can't think of many aircraft its size that would be). 500-lb Mk-84s and GBU-12s are still typically dropped in pairs, but it's possible to drop one at a time and keep a stable airframe left to right. The fire control computer on most planes with multiple front-to-back hardpoints, including the F-15, will typically release ordnance front to back, bottom to top, reducing the possibility of the ordnance getting tangled up with others on the way off the aircraft or to the ground (it also helps improve accuracy to use the front stores first as airflow over the weapon is cleaner with nothing in front of it). To maintain weight balance front to back, it is possible to configure the FCC to release from the ends toward the center, but it only matters at all for the F-15E's CFT hardpoints which are in three groups from front to back; it's a bigger deal for a heavy bomber like the B-52, which can carry on external hardpoints running practically the entire length of the fuselage.

Either way, once the ordnance is gone, the F-15E feels like a completely different plane, much more like its air-superiority cousin. The CFTs (and the added targeting pods and the Wizzo's seat) make the F-15E inferior in a dogfight to the C-variant, but it stands a lot more of a chance with a similar loadout versus having almost 15,000 pounds of bombs on the rails.

The airplane is going to have established weight and CG limits already established (unless you are asking about test planes, which I feel would be an entirely different question and answer).

That being said, there are very quick methods for calculating weight and balance during flight for both shifting weight, and dropping weight. On my NIFA (National Intercollegate Flight Association) flight team we practice these type of formulas all the time. Using a CR (or even E-6B) you can follow these formulas to find what the CG will be after dropping a known weight from a known arm. Any pilot will know the amount and location of the payload or "ordinance" before dropping it, as well as running these calculations.

Here's some note cards that I have. On here you can see the formulas for weight shifted (2d down on the right) as well as weight added or removed (bottom left). If you have any questions about these type of calculations feel free to ask. 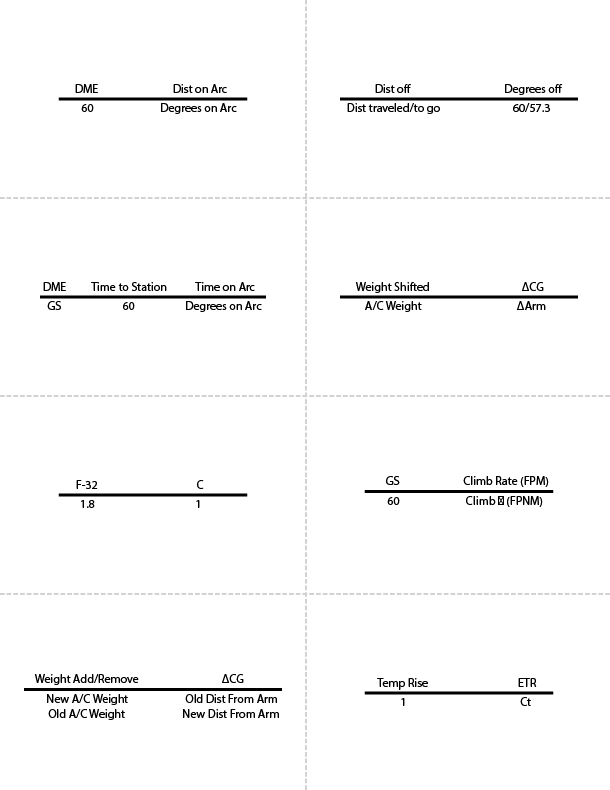 Not the answer you're looking for? Browse other questions tagged military weight-and-balance cargo ordnance or ask your own question.