Why isn't it possible to locate the rudder in front of an airplane's center of gravity?

Why isn't it possible to locate the rudder in front of an airplane's center of gravity?

Specifically how does this relate to the stability derivative?

It is possible to locate a vertical fin, as well as a control surface, ahead of the center of gravity. $c_{n_r}$ (yaw-induced yawing moment or yaw damping) will not likely change much, all other things being equal. $c_{n_\beta}$ (sideslip-induced yawing moment or directional stability), on the other hand, will be reduced, perhaps becoming negative. Any sideslip will therefore result in a yaw moment which increases the sideslip. Expressed in linear control theory terms, this will be a pole in right hand plane when you plot the complex solution of the equations of motion. It is an unstable configuration.

As Peter mentioned, it is possible to remain in control in this configuration by means of active control. Active control tends to be somewhat tiring for a human operator if it is possible at all. Incidentally, this kind of instability existed in the lateral axis of the 1903 Wright Flyer, which was configured with a canard of considerable proportion. It was reportedly quite tiring to keep stable.

CP ahead of CG

There are advantages to having a center of pressure ahead of the center of gravity, the chief being agility. Back in control terms, the farther you move poles to the right, toward instability, the faster or "twitchy-er" the response. The F-16 is configured this way and has been the standard of maneuverability for quite some time, requiring computers and fly-by wire for stability augmentation.

Control surfaces ahead of CG

It is also advantageous for maneuverability to have control surfaces ahead of the CG. In this case it is for avoiding a feature of control termed "non-minimum phase" response. For a conventional, tail-configured aircraft, when a climb is commanded, the tail is forced down, leading to a net reduction in lift until an increase of angle of attack is developed. This is non-minimum phase response. It was necessary to initially go the opposite direction from that which was desired. In canard configurations, this is not the case, first the nose climbs, then everything climbs.

Forward control surfaces, forward center of pressure and a stability augmentation system with adequate dynamic pressure make for one heck of a maneuverable package. This is a common recipie for tactical missiles.

Well, it is. It has been done since maybe 160 Million years.

The Pterodactyloidea branch of flying saurians had long beaks, in most cases balanced by a large bony structure at the back of their heads, which provided lateral control. This is their only body part with noticeable side area, so no other part of their bodies could serve a similar purpose. Controlling direction like this helps to immediately change course to whatever the animal looks at. 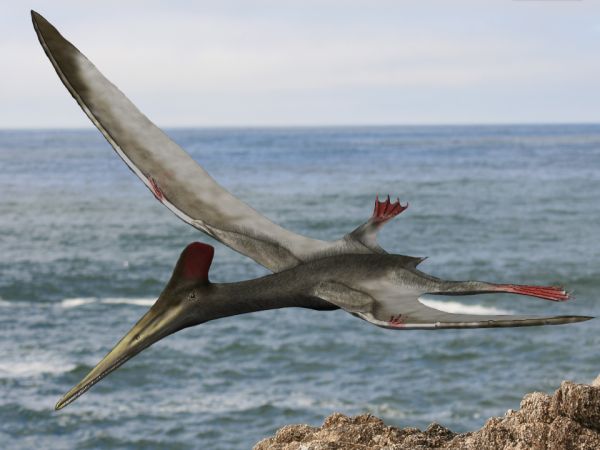 Since the head was ahead of their center of gravity, the configuration is statically unstable and needs continuous control corrections. On the other hand, it provides very quick responses. This works and has been proven several times by pterosaur-shaped flying models.

Another branch, the Rhamphorhynchoidea, had a tail which provided additional lateral and longitudinal control. Palaeobiologists are still arguing, however, whether the tip of the tail was oriented horizontally or vertically in flight.

In modern times weight and drag savings were the motivation for placing the fin at the tip of an airplane. The British space plane proposal HOTOL had such an actively controlled fin just on top of the fuselage nose. Also, many air-to-air missiles have their moveable control surfaces close to the tip, and those are balanced by bigger fins at the back. Both together make them canards in lateral and longitudinal control.

Not the answer you're looking for? Browse other questions tagged aircraft-design rudder stability or ask your own question.

6
Why is the DC10/MD11 center engine placed where it is?
17
Do any airplane designs exist that don't involve a flight surface that provides downforce?
0
What is the difference between a forward, aft, high and low center of gravity?
5
What makes the F/A-XX twin-engined tailless fighter controllable with engines out?
2
Why are smaller wings in the front with these VTOL aircraft?
2
What are reasonable values for the position of an airplane's center of gravity compared to that of its center of lift?
7
Is a trimmed flight not always an unstable system?
2
Center of Gravity and Center of Lift stability
2
What are the stability criteria of helicopters?