Is IAS without instrument error the same as CAS?

Except as noted, all airspeeds quoted in this handbook are Indicated Airspeeds (IAS) in Knots and assume zero instrument error.

Why didn't they denote that as CAS (calibrated airspeed) instead, which is without instrument error? Is there a key difference between the two that I'm missing?

Even without instrument error, IAS does not equal CAS. This because there are two kinds of errors that make up the difference between Indicated Airspeed (IAS) and Calibrated Airspeed (CAS)

Instrument error is the error introduced by ASI itself by transforming the pressure to a speed indication. For example calibration errors of the pressure sensor or excessive friction in the mechanical drive system of the dial fall into this category.

The POH in your example assumes no Instrument error, but is corrected for installation error. An implicit assumption is made that there are no leaks in the system, so the POH corrects for airflow disturbances. That is why some aircraft have different tables for different configurations; the configurations affect the airflow around the pitot tube.

In aircraft equipped with electronic Air Data Computers (ADC's) the installation error is sometimes automatically corrected by making use of angle of attack sensors, electronic configuration information and lookup tables.

Instrument error is usually something to do with the actual instrument (like the arm on the dial or something). The primary difference between IAS and CAS as I understand it is air pressure discrepancies in the Pitot-tube due to different angle of attacks and airflow disturbances due to the airframe. The POH of the Katana DA20 I regularly fly has a chart mapping IAS/CAS, with two different lines corresponding to different flaps configurations.

I'm no aeronautical engineer and this is a layman's understanding, so feel free to correct me. As I understand it, IAS (without instrument error) is the measured air pressure, CAS is the theoretical air pressure which would've have been measured, would it be possible to measure it perfectly, and instrument error is due to machining imprecisions or otherwise errors in the construction of the instrument.

Apparently the question wasn't if IAS without instrument error is the same as CAS, but why not use CAS throughout the POH. The easy answer is, since the CAS cannot be measured, but IAS can (to the extent that construction precision allow) and is displayed to the pilot, why should he memorize numbers which he'll never see? Charting IAS makes much more sense, and although they'll be offset by instrument errors, those are (generally) individual to the aircraft, and so it's the closest you're going to get in a printed manual which is not a one-of copy for a single aircraft. 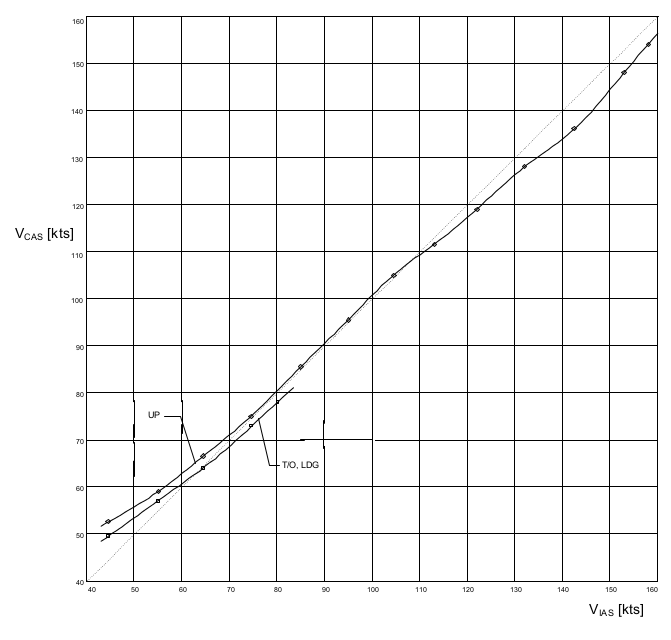 Not the answer you're looking for? Browse other questions tagged flight-instruments airspeed or ask your own question.

3
How is the the turning error of an aircraft magnetic compass calculated?
6
How does the IAS stall speed vary with increasing altitude?
8
How does a Machmeter behave if the static port is blocked during a constant CAS climb?
21
What is the reason for changing the speed reference (IAS or Mach number) with altitude?
3
Why $\frac{\Delta p}{\overline q}$ is depending by weight, flap deflection and other parameters? Which are other parameters?
3
How are IAS to CAS conversions calculated?
2
What is the relation between IAS and TAS at a constant altitude?
6
Is it illegal to fly a Cessna 172S under day VFR with an inoperative vacuum gauge?