How can I find traffic patterns that pass over my house?

I live in Atlanta, GA well north of the airport and typically there is very few large, commercial aircraft that pass overhead. But there is an on-going security issue at the airport today and there are some really low-flying commercial jets passing from east-west over my house at altitudes that look like they would be on final approach (if they weren't 40 miles north of the runways anyway). There is a military airport near by and we frequently have C-130's landing but they don't come from that direction.

So I really have no idea what those planes were doing or where they were going, and in the 5 years I've lived here there have never been commercial planes that flew that pattern. At another place I hang out, close to the airport, I've noticed that air traffic passes over when there are storms at the airport.

I would imagine this is a "something is wrong at the airport" pattern as opposed to a normal operating pattern, and it may even be something that was specific to that particular aircraft for some reason.

Its not that easy for a non-pilot to do it, but there are about a dozen "Arrival Procedures" that show specific routes into ATL.

You can also see on the Atlanta Area Chart how some of the traffic might flow near your house.

The easiest thing to do, if you can pick out some of the aircraft, is to look up their flight paths on Flightaware: 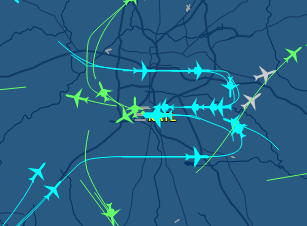 Since the question is about how to find them, and not actually asking for a listing of them, I'll answer that one option would be to locate a flight school (ideally one operating near KATL like Aero Atlanta at DeKalb-Peachtree) and pay for a one hour ground school lesson specifically on how to read KATL's Visual and Instrument approaches (the flights could be on either depending on what's happening with weather and ATC.) A CFI would be able to help you identify which procedures cross low over your area.

The downside is it will cost you (probably in the neighborhood of $50) but you'll get a really interesting introduction to airport procedures. And may even lead to a discovery flight!

You may also find out that none of the arrival procedures involve low routes over you and ATC was vectoring traffic into unusual areas to create space for a situation at the field. Within Class B airspace, all aircraft are under positive radar control by ATC, meaning they can pretty much send any aircraft anywhere they want if the situation warrants and the pilots are able to comply. Still for noise abatement reasons they usually wouldn't have large jets flying low unless they were on an approach.

Not the answer you're looking for? Browse other questions tagged commercial-aviation airport traffic-pattern or ask your own question.

3
how to know about designed airways above my house

23
What happens to incoming flights when the airport shuts down?
17
How does a large airport switch flow?
13
What is the correct traffic pattern at a towered airport?
16
Can commercial airliners fly over hurricanes?
6
Airport Security Pre-1970-s?
2
I flew the wrong pattern at an uncontrolled airport... Should I be worried?
13
What should I do if I lose situational awareness while in the pattern?
19
How can I easily keep track of my landing count during pattern work?